I’ve always preferred ’80s action figures over offerings from the ’90s, mainly because they were the toys I have fond memories of. Whereas a Street Sharks or POTF2 Star Wars figure would set me back about £5 to £10 from a store, I could easily pick up a whole bunch of He-man or Vintage Star Wars figure for mere pence at a carboot sale or flea market. That isn’t to say that there aren’t ’90s figures that I love. After recently playing through some of the Resident Evil 2 Remake, I was reminded of Toy Biz’s Resident Evil series of action figures released in 1998.

Anyone who has followed this site for a while might remember that I covered the Claire Redfield and Zombie Cop set back in 2016 (it’s gone by so quickly!) and I had always intended to cover some of the other toys in the line, so today will be that day! 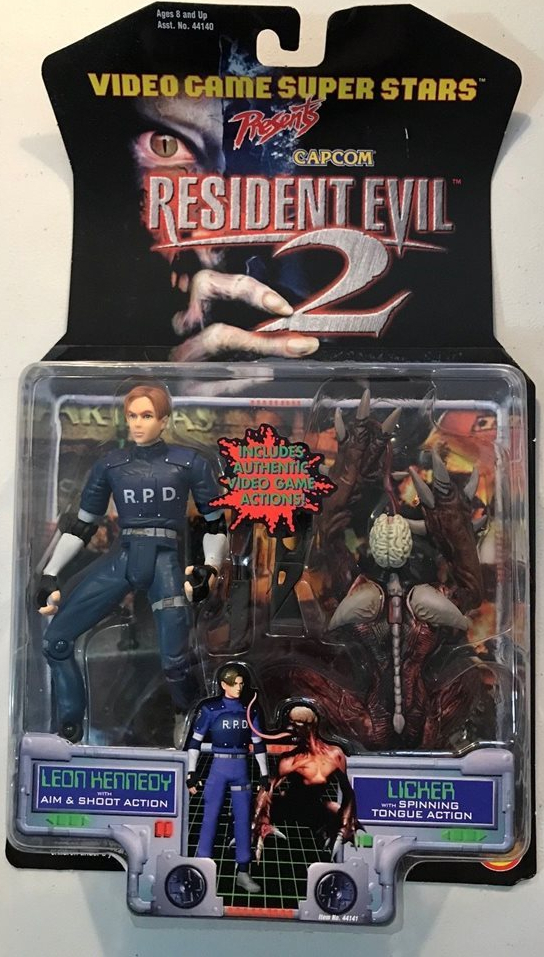 By 1998, Toy Biz had gotten quite a reputation for delivering fun action figures based on characters from Marvel Comics. Toy Biz was actually partially owned by Marvel from 1993, and with their partnership with Capcom to release games like X-men vs. Street Fighter and Marvel vs. Capcom, it was probably inevitable that toys based on Capcom games would eventually be on shelves. So I present to you Leon Kennedy and the Licker!

The thing I like about the Toy Biz Resident Evil toys is that the figures came in a two pack, meaning you had the possibility for play straight away. There were many times as a kid that I would buy a brand new figure from a new toyline, and they wouldn’t necessarily fit in with other figure lines due to the way they were scaled. So having a ‘hero’ and a ‘villian’ straight out of the pack is neat. 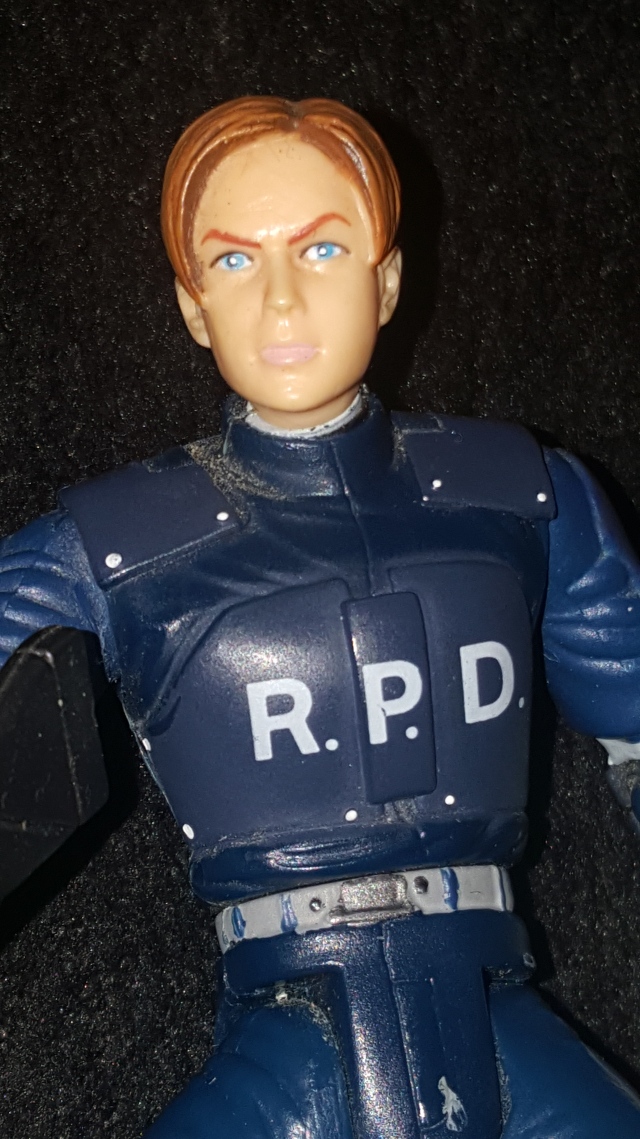 Leon has a boyish, Leonardo DiCaprio kind of look to his face, and is rocking a haircut that couldn’t look more ’90s. 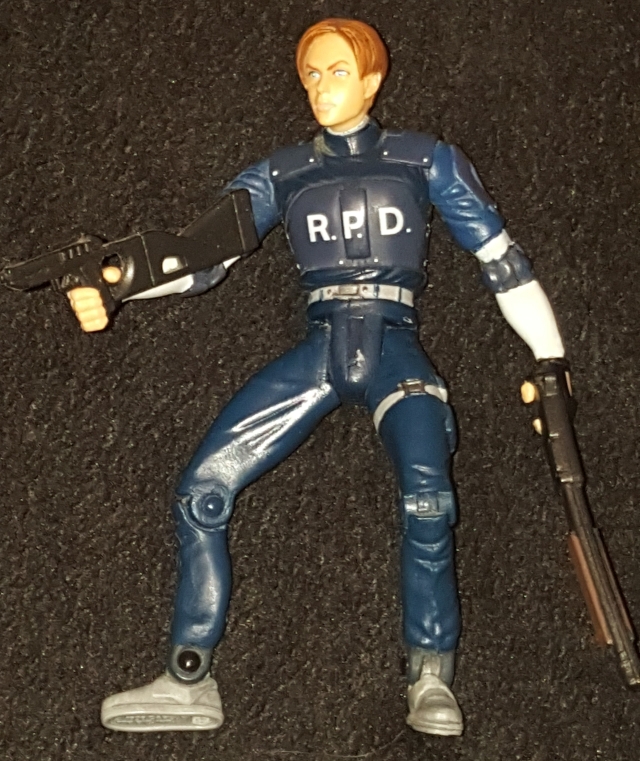 Leon has some nice paint application, although certainly not as impressive as on Resident Evil toys released by NECA a few years later. The one thing I dislike about this figure is his posture. Due to the way his right leg kind of sticks out, it makes him quite hard to balance, so much so that I got fed up and just lay him down to take a picture of him. I’ve definitely had toys that are even worse to stand up, but Leon isn’t particularly good. 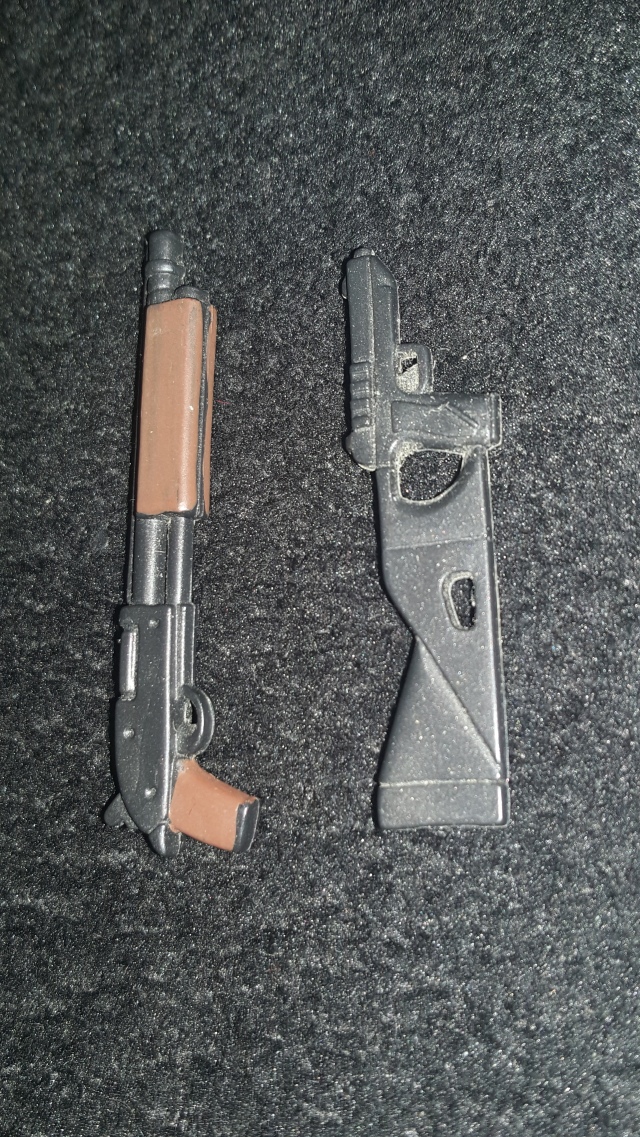 Leon comes equipped with two weapons- the shotgun and the handgun (which has now been named Mathilda in the RE2 remake). Both are pretty good and fit well into Leon’s hands, but due to the figure articulation, you can’t make Leon hold  the shotgun with both hands like he would in the game. I tend not to care about things like that too much though. 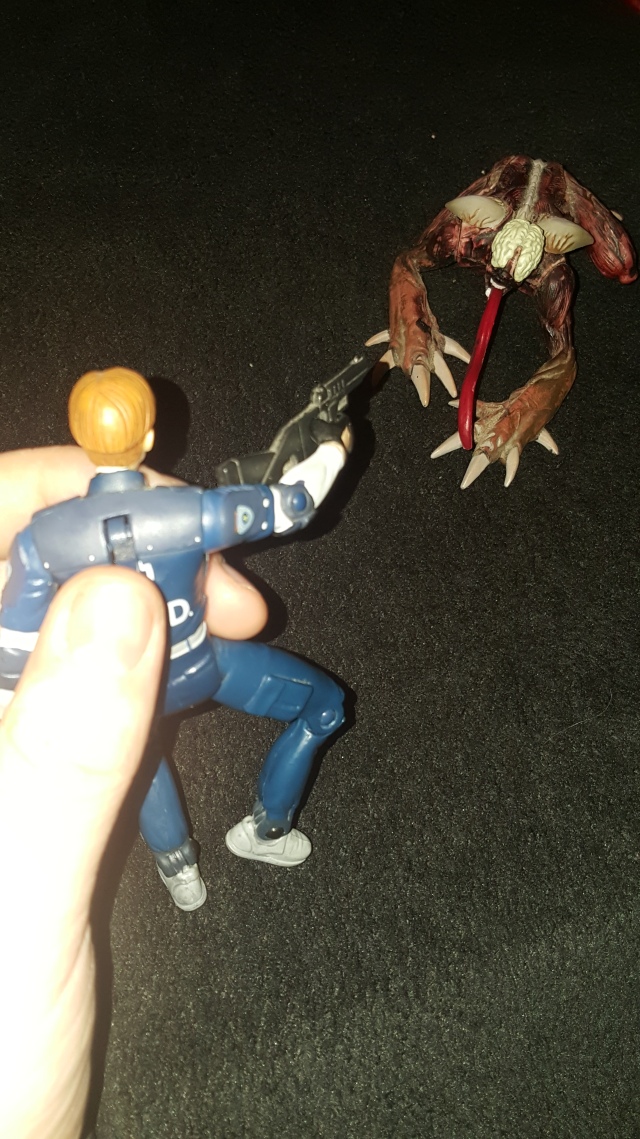 Leon comes equipped with a small lever in his back which will make him ‘aim’ his arm up an extremely slight amount whilst turning his head. It’s an okay feature I guess, but it doesn’t seem worth the annoyance of sticking a massive leaver out of his back. But it was the ’90s and this thing was common, so I shall try not to bitch about it too much.

Now onto the Licker!

I love this figure. It looks pretty terrifying for a small ’90s toy. What the Licker lacks in articulation, it makes up for by simply looking amazingly horrible, with the sculpting really showing off the skinless tissue on the creatures arm and back.

Like the Leon figure, the Licker has an action feature. By winding the tongue up, you can push a little button on the back of the figure which will make the tongue spin, but it seems to rotate so fast that it doesn’t look like it really moves at all. It’s a nice idea but doesn’t work very well. I would have liked a tongue that could slide out with a lever on the back (a bit like vintage Star Wars Luke Skywalker’s lightsaber).

In all, I really love these RE2 figures. They aren’t uber detailed but are detailed enough to do the job and whilst they aren’t overly articulated, but have enough maneuverability that kids could pose them enough for play. There are definitely much better Resident Evil figures out there, but if you want something that looks and feels like a toy, then these are pretty ideal. 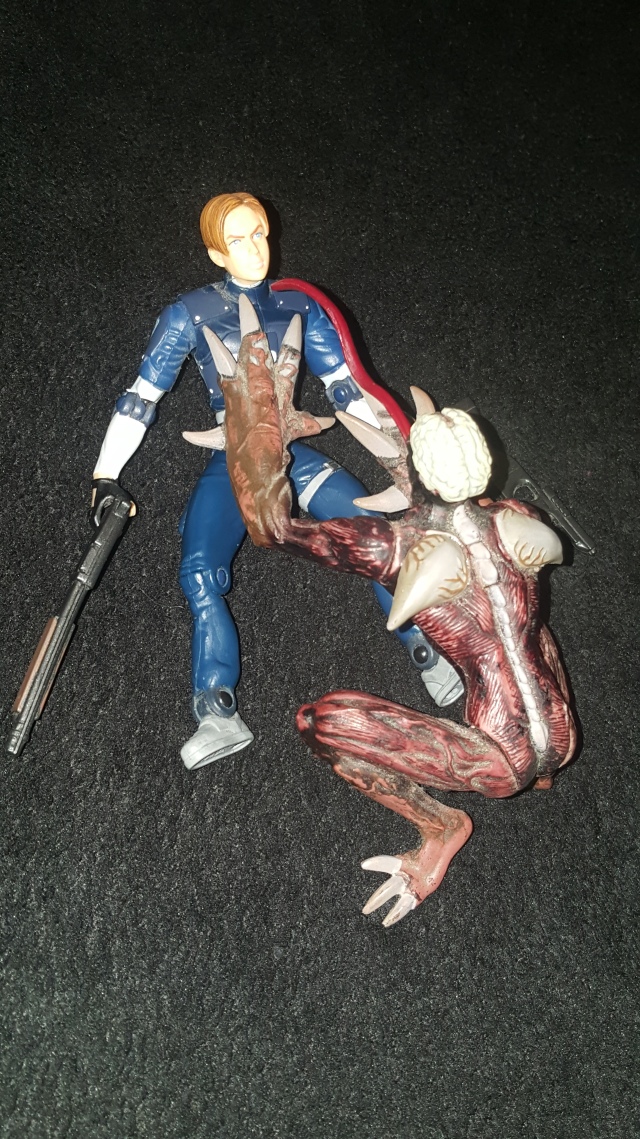 I will eventually get around to reviewing some of the figures from the original Resident Evil that I own, but seeing as it took me about three years to cover this one since the last, it might be a while yet!