So Halloween has been and gone, and I was hoping that some action figures based on nasty bastards from various horror movies that I had pre-ordered months back would show in time for me to give them the attention they deserve on here at Halloween. Typically, there were delays and the figures weren’t released until after Halloween had been and gone. One of them, a Jason Voorhees figure has still not been released due to shortages or delays or something, so I had to try and source him from outside the UK.

So, what would you get if you crossed He-man style action figures with Horror icons? Awesomeness in plastic form is what. 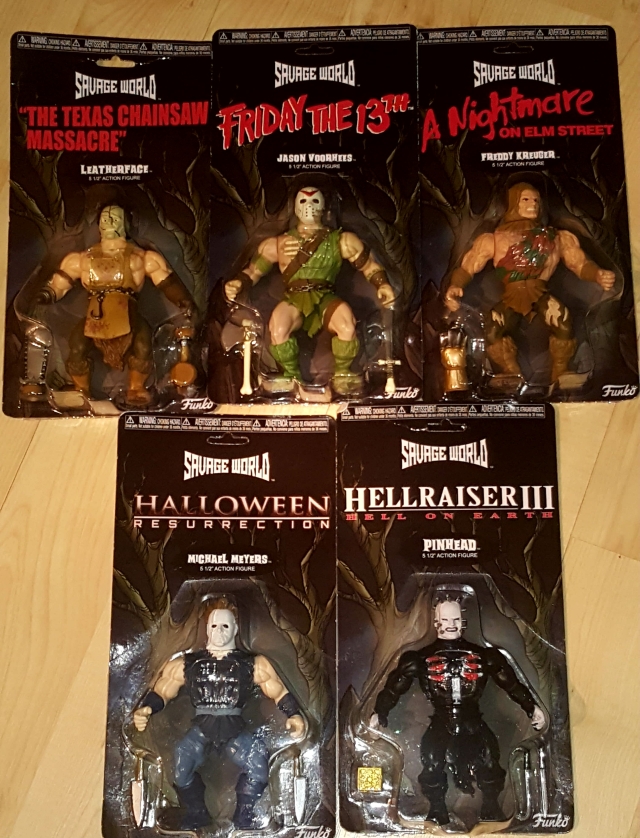 I really do have to hand it to the folks over at Funko. They win the award for absolute ingenuity with their toylines. Horror action figures aren’t in any form a rarity and have been released by numerous companies over the years, but never have we seen Horror icons re-imagined as Masters of the Universe styled warriors before. So here they are, looking all ripped and more dangerous than ever!

Pinhead is one of my favourite figures in the bunch. He comes equipped with two blades which look like they would be perfectly suitable for serving up some pain (or pleasure), and also comes with the Lament Configuration puzzle box. Although Pinhead can’t really hold it, it is a very welcome edition, and perfect for if you want to pit Pinhead against the MOTU and send He-man to the Cenobite dimension in order to be subjected to an eternity of sadomasochistic torture.

Like all of the figures in this line, Pinhead features a limited six points of articulation. A lot of people prefer hyper articulated figures these days, but I will always prefer the simpler design of action figures from yesteryear.

Of all the figures in this series, I think Pinhead looks the most like he could pass as one of Skeletor’s lackeys. 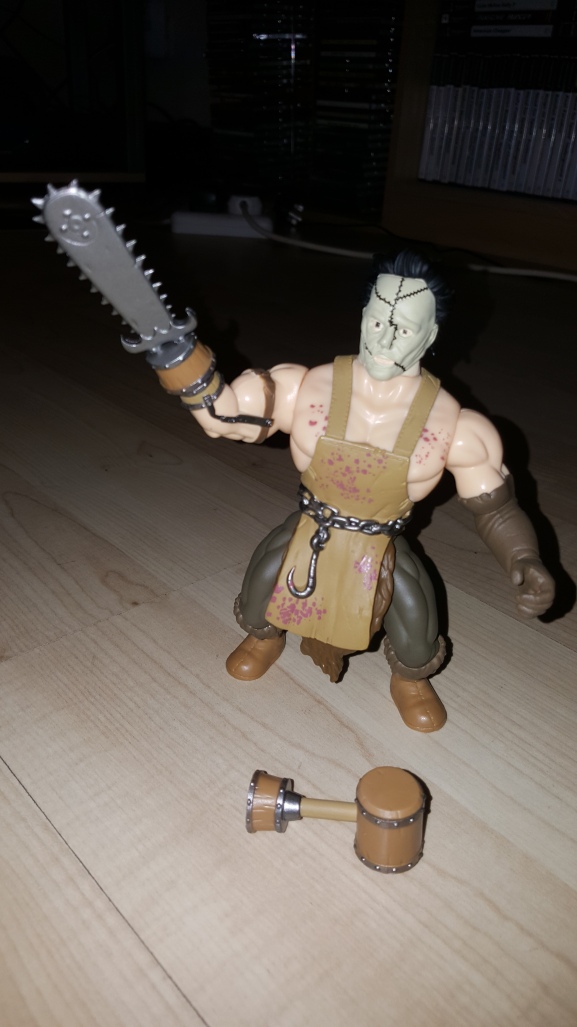 I hadn’t ever seen The Texas Chainsaw Massacre until a few months ago, but I enjoyed it thoroughly, and thought Leatherface was an interesting and genuinely terrifying antagonist.

Being a medieval style warrior, this figure doesn’t come with a chainsaw but does come with an option of either a chainsaw-esque blade or a mallet, both of which fit onto his arm, much akin to the old Trapjaw figure which featured either a cannon, hook or pincer.

Overall, I have nothing bad to say about this figure. I dig the blood splatters up his front, and the sculpt is excellent.

Although Mr Voorhees caused me a fair amount of annoyance with being hard to find, he is a fantastic figure and was definitely worth the hassle of tracking him down. This version of Jason appears to be one inspired from after he has returned from the grave in the fourth Friday the 13th movie, and as such he certainly looks a bit zombiefied with ribs showing. He also features a cool looking skull-like head that is protruding through his broken hockey mask. 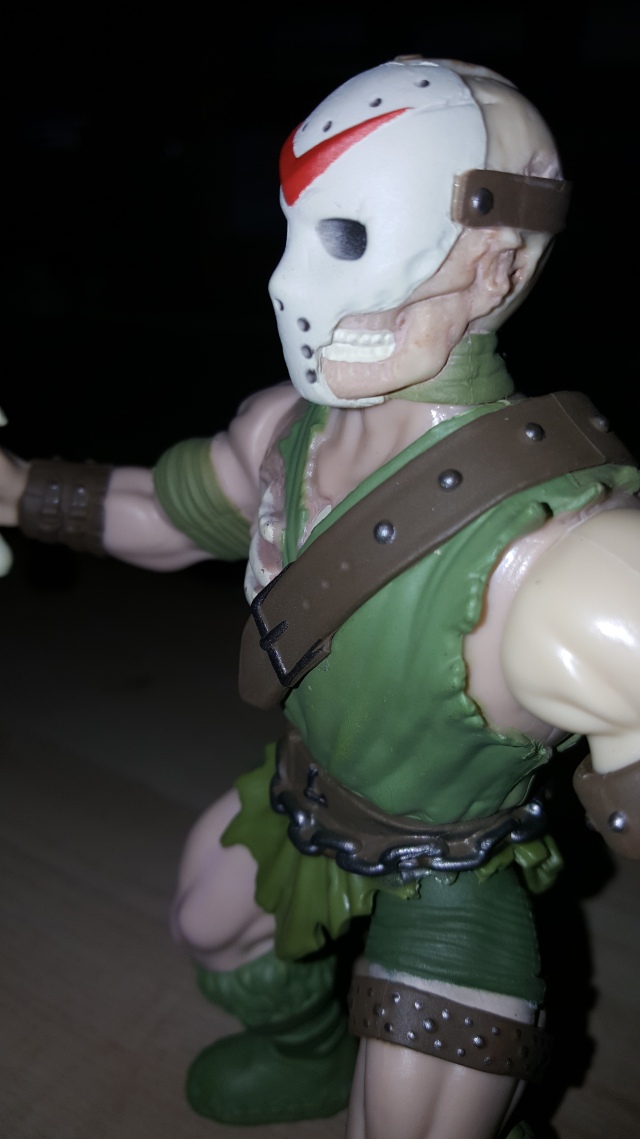 Jason also comes with a bone sword and axe. It would have been cooler if his sword had looked a little more machete-like, but the fact that both weapons look like they are made from bone is undeniably neat. 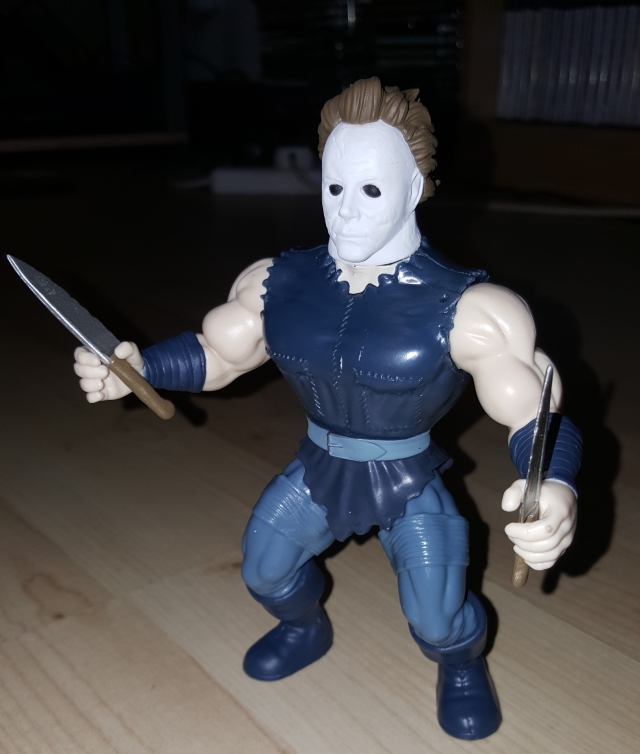 Although I think the sculpt of Michael Myers is fantastic, this is probably the weakest figure in the line. He comes equipped with two knives, neither of which fit very well in his hands, which is unfortunate, as stabbing teenagers is tricky when you can’t even hold a knife.

Despite this though, it’s still a very cool figure and I like how his outfit is a fun and medieval take on the boiler suit worn by the onscreen version of the slasher villain.

This representation of Freddy feels like it could very much be something from one of the Nightmare on Elm Street movies, as Freddy is known to take different forms or dress for different themes in order to murder his victims. I’m not a big fan of the hood and feel that he could still have looked medieval even with his iconic hat. Jason still retains his hockey mask which is about as un-medieval as you can get. I do appreciate that he has some remains of his striped woolen jumper though, and the burn scars on his flesh look extremely detailed.

Freddy comes equipped with his bladed glove which slips over his hand a bit like the gauntlet worn by Lion-O from Thundercats. Overall, I like Freddy but he isn’t my favourite figure in the bunch.

So that’s the lot! I love this figure line and I hope that Funko will do a second series, perhaps featuring an Orko-sized Chucky or an Ash from the Evil Dead series. There aren’t many toylines I see coming out that I feel the need to pre-order right away, but this is one I really needed. I moaned about Funko a while back regarding some of their ReAction figures being of poorer quality, but if Funko keep making figures this good and this innovative, I’m not gonna have to say a bad word about them. More please Funko!