I’ve made it quite clear in previous posts about my dislike of Funko Pop figures. The small bodied, big headed toys with beady black eyes, which seemingly populate everywhere from comic book stores to sections in my local supermarket.

Yet Funko I have no real qualms with. They are one of the few major toy companies that try add a bit of fun into their toylines, trying out new things which are often a bit wacky and ‘out there’, and I often wonder if this pays off for them. Their ‘Savage Worlds’ line of figures is one of my favourite series that they’ve done to date, yet they always seem to be sat  at discounted prices whenever I encounter them in toy shops. It seems unfortunate that the Pop Vinyl is my least favourite product that they manufacture, yet is seemingly also their most successful.

Anyway, because I feel I should commend their other endeavours outside of Pop Vinyl figures, here is me talking about another Funko line that I’ve fallen in love with the past few months. Their take on the Japanese Sofubi!

So firstly, I should probably explain what a Sofubi is to those who aren’t familiar. Sofubi ( ソフビ) is an abbreviation of Soft Vinyl (ソフトビニール Sofuto Bineeru), and is used to mean a cheaply made type of vinyl toy manufactured in Japan, harkening back to the 1950s and ’60s. Everything from popular Kaiju monsters like Godzilla to relatively obscure video game characters like Rick Taylor from Sega’s Splatterhouse series has been immortalized in soft vinyl form, with a thriving collectors market, making Sofubi toys often quite sought-after.

In more recent years, Sofubi has become a popular way for independent artists to express themselves, with some releasing handmade Sofubi toys at a very limited run, with perhaps a small amount of variation on each figure with different paint applications, or different coloured plastic for each figure. Many Sofubi often have crazy colour-schemes which make them stand out from products released by more contemporary big toy manufacturers. 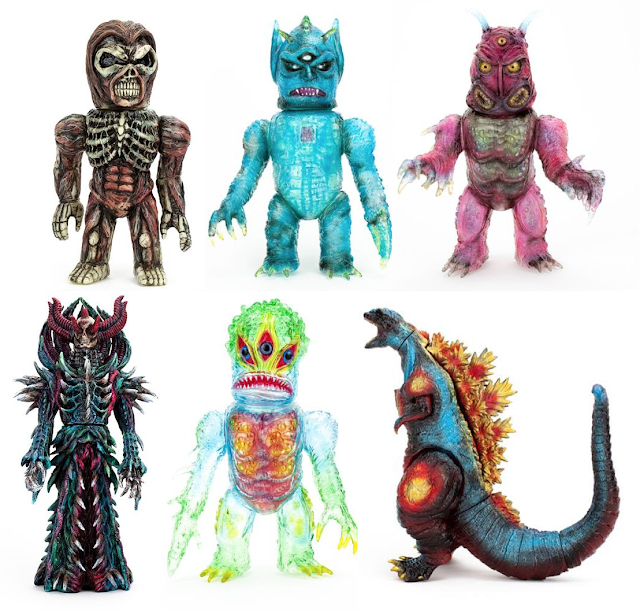 As well as original designs, many Sofubi figures are based on characters from pop-culture, but due to their small run and handmade nature, a lot of them aren’t officially licensed products, but unlike a lot of other collecting markets, this doesn’t always affect the desirability of a figure.

Seeing how popular the Sofubi products of independent artists can be, even the bigger companies have gotten into the market by releasing limited runs of Sofubi figures, which often are official licensed products. Which brings me to the Sofubi toys I’m going to talk about today! Here are some of my recent Funko acquisitions-

My Star Wars Funko “Japanese Hikari” Sofubi Figure Collection! Technically I don’t know how Japanese these figures are, as Funko is an American company. But they certainly resemble the size and style of Japanese Sofubi figures, complete with eccentric colour-schemes.

Each figure has been released in a few different colour styles, so I’ve picked up some of the ones with colours that I quite like, so here’s an individual look at each figure I own. 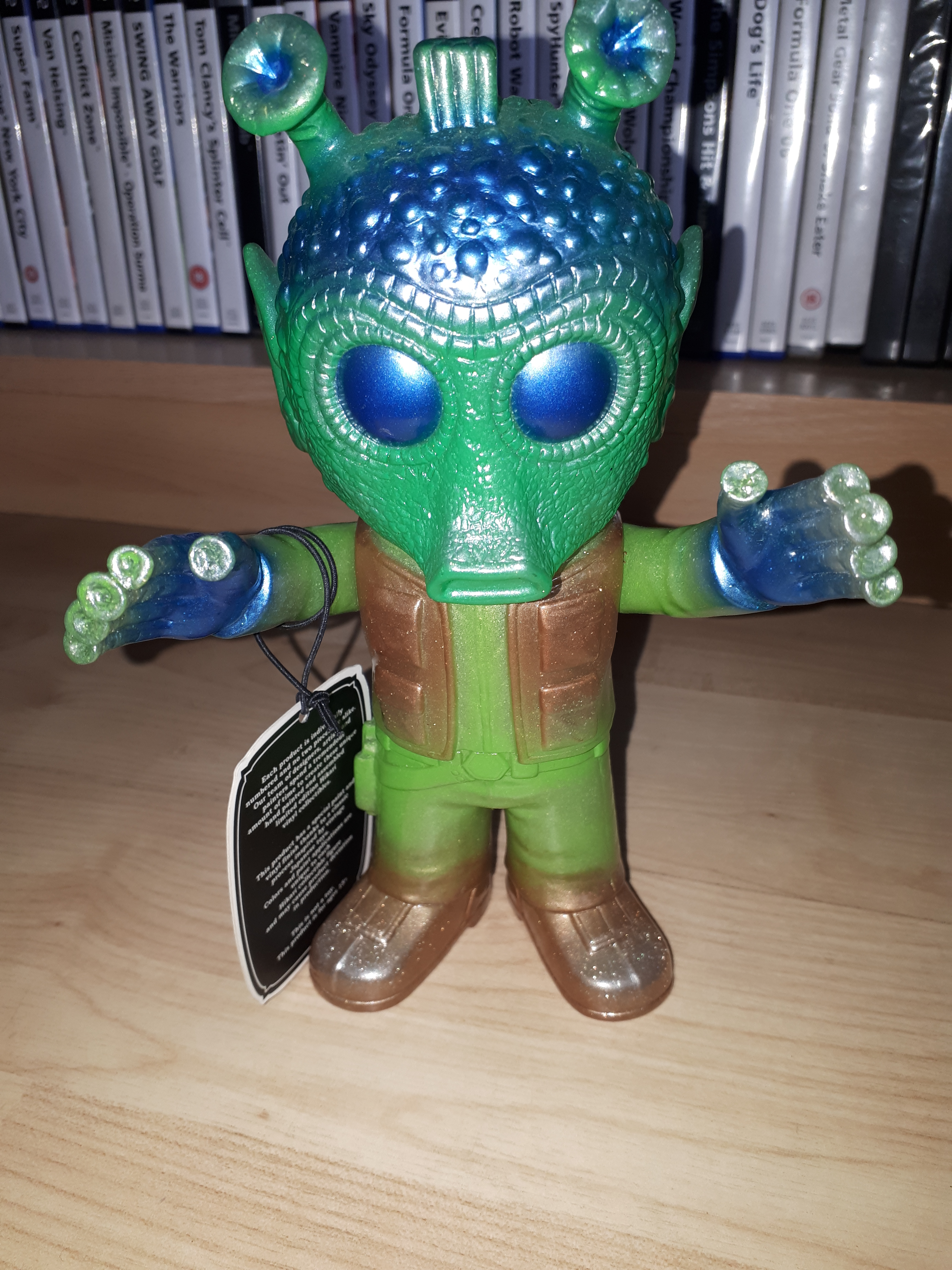 Of the different colour variations of this Greedo figure, the ‘Sublime’ one is my favourite, with a kind of blue metallic paint job on the eyes, hands and forehead. For some reason, I get a real feeling of the Vintage Kenner Greedo figure with this Sofubi. I’m not sure why, probably the blues and green colours which also featured on the Kenner figure.

The back of the figure isn’t as detailed as the front, but Sofubi are often simplistic in the design, and simplicity doesn’t detract from the overall figure in any way. The ‘Sublime’ version of Greedo is limited to just 750 units which I would have assumed would have made him quite valuable. I’m not keen on the idea of artificial scarcity, but perhaps due to being made outside of Japan where the rest of the world isn’t quite so competitive in getting their hands on limited release Sofubi figures, the relative rarity of this version of Greedo cost me around £15. For a nice chunky eight inch figure with an interesting colour scheme, I didn’t think this was a bad price at all. 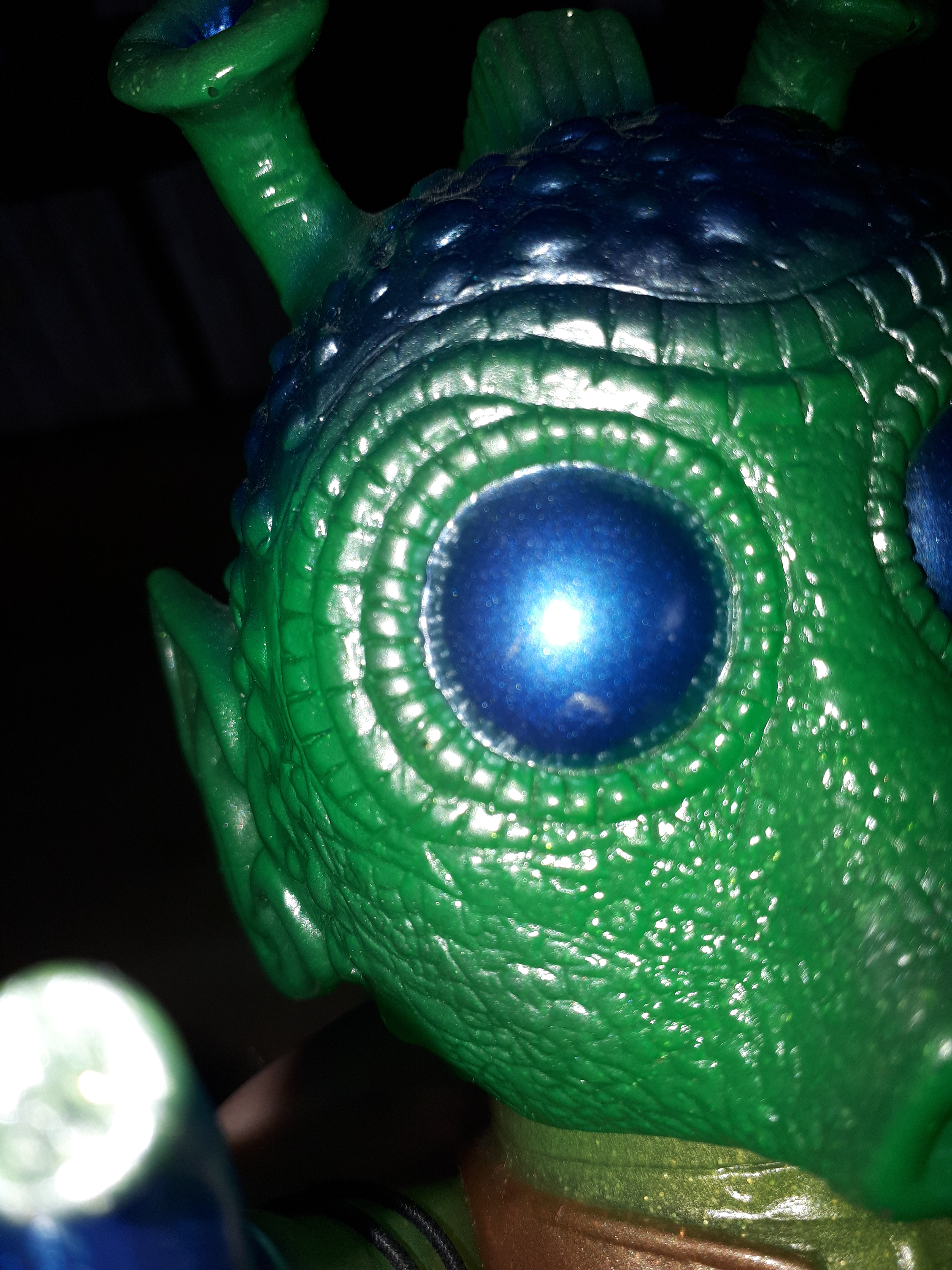 One small issue I had with this figure was that it had a little wear on the eyeball, where it looked like the paint had worn off or not even taken to the plastic. This Sofubi was sealed in the box and I noticed the slight flaw straight away, so it definitely happened prior to the figure being boxed up at the factory. It isn’t hugely noticeable though, but I have found other Funko products have similar problems in terms of their overall quality.

Definitely the most colourful figure of my small Hikari Sofubi collection, I even like the name of this Bossk figure. I dig the idea that a lowly bounty hunter could have cosmic powers.

This version of Bossk is scarcer than Greedo, with only 550 units of this multicoloured menace being released. Like Greedo, this didn’t really mean much in terms of price as this figure was purchased for under £20. It seems that some of the figures with the more realistic paint applications go for more than this, which seems odd to me. I figured that there’s already thousands of existing action figures and statues of Bossk painted in a manner realistic to his onscreen portrayal, so surely something a bit crazy and different would be more desirable. But apparently not!

I absolutely adore this figure. I’m guessing from the colours and name, it’s meant to be inspired by the scene in Return of the Jedi where Palpatine is hurling lightning at Vader when he picks up the Emperor to throw him down the the Death Star chasm. It actually reminds me of a Darth Vader figure I had as a kid, which I absolutely adored, just because you could see Vader’s Skull inside his helmet. The only thing more badass than Darth Vader is Darth Vader with his skeleton showing. That shit’s just metal as hell.

Anyway, back to this Sofubi.

The back of the figure comes with a vinyl cape which I loved as it reminded me of the Vintage Darth Vader from back in 1978. The one unfortunate thing is that the cape seems to get marks on it very easily, but being vinyl I imagine it would wipe clean with relative ease.

Price-wise, I paid just over £20 for this figure posted which I purchased after winning an eBay auction. There are apparently 1500 units of this figure released, and a lot of people are asking higher prices than what I paid, perhaps because Vader is more iconic and recognizable than either Greedo or Bossk. There are also a couple of other interesting versions, one called ‘Starfield’ which is black and clear with what appears to be white speckles running throughout the figure, as well as a holographic blue version which looks like mouthwash. But I’m happy with this version of the youngling-slaying asthmatic, so I won’t be purchasing any other versions. On to my final figure!

The only real way that a chunky eight inch Boba Fett action figure can realistically be improved upon is with the addition of glitter. So naturally this version of the Fett-man has little sparkly bits through out his armour paint, and inside the clear plastic of his hands.

He also has a very glittery vinyl cape, which leaves your hands all sparkly after touching it. The one thing I dislike about this figure is that his iconic jetpack is missing the rocket which usually protrudes from the top. But as the rest of this figure is more about sparkles than screen accuracy, I can just about forgive it. I ended up paying far too much for this figure, as I bought it from America, but had a little money in my PayPal as I’d sold a few things. It ended up going through eBay’s Global Shipping Program, and unfortunately, the courier they now use for the UK leg of the journey is Hermes, a delivery service well known for being absolute fucking toss, who seem to delight in smashing parcels into little bits before they deliver them to you. The box to Boba was squashed to shit, so I contacted eBay and they gave me a refund and allowed me to keep Boba. So I sorted Boba’s box out as best as I could, and am still glad to have him in my collection, although I wouldn’t have paid the price I did (£45) for it to arrive in the condition that it did. But for what ended up being a ‘free’ toy, I really can’t complain too much. I just wish that eBay wouldn’t have opted to use such an abysmal courier as Hermes.

So that pretty much concludes my collection of Star Wars Sofubi figures from Funko. I actually also have a Stormtrooper which I dislike, as it’s just black and doesn’t look interesting in any way, so I don’t plan on keeping hold of it for long, so haven’t even removed it from the box. I like that Funko keep producing odd toys, and whilst they keep doing these quirky kind of things, I’ll keep buying them. I’m pretty sure their Hikari Sofubi line finished a couple of years ago though, but they always seem to have something interesting being released. So if you like Japanese inspired toys, as well as Star Wars, then keep an eye out for these on eBay or wherever. This line wasn’t just limited Star Wars, as there were also figures based on Marvel, Game of Thrones, Batman and a few based on cult sci-fi/horror movies as well.

Sofubi toys will probably make another appearance on this site, as I have a few different ones, and I quite like talking about something that isn’t a typical Western toy!