I’ve now had my fill of alliteration for the day.

I often buy items with the plan to excitedly talk about them on here, but usually I said items somewhere safe and then end up forgetting about them until months and months later. The item(s) I am covering today is definitely in the category of things I have squirreled away for a year and forgotten about.

It’s no secret that I have a love for multicoloured little figures as I have covered Mini Boglins and Monster in my Pocket toys on here before, but it might surprise people to know that I didn’t care for M.U.S.C.L.E figures too much when I was a kid. Although a lot of people are aware of M.U.S.C.L.E figures due to them being a staple part of nearly every ’80s kids toy collection, a few people might not know of the toylines origins. The line actually began in Japan, 1983, and were known as Kinkeshi. Manufactured by Bandai, they were cheap little rubbery figures originally sold in gashapon vending machines and were based on Kinnikuman, a series of anime and manga revolving around a clumsy superhero wrestler. Due to the popularity of the toyline, Mattel purchased the rights to distribute the line in North America and released the line as M.U.S.C.L.E (Millions of Unusual Small Creatures Lurking Everywhere) in 1985/86. Due to the toys being extremely affordable, kids could easily get a small collection without too much strain on their parents wallets.

When kids began to eventually lose interest in the line, Mattel re-released the figures in various colours, just to spice things up a bit, until the line was finally discontinued in 1988.

I really couldn’t get into M.U.S.C.L.E as a kid. I found them for mere pence at car boot sales and markets in the ’90s. I still bought them, but they never ever found a place in my heart like MIMP or Mini Boglins. I think it’s because I never found any of the colourful figures, mine were all of the flesh-coloured variety. Compared to the multicoloured luminescence of MIMP toys, M.U.S.C.L.E figures just fell a bit short. I’m definitely less fickle as an adult and can appreciate the interesting looking characters in the M.U.S.C.L.E line, but as a kid I found them less appealing. I’m still gonna say that a fluorescent pink Loch Ness Monster looks far more interesting than a flesh-coloured wrestler, but I can really appreciate the more interesting designs of some of the M.U.S.C.L.E figures these days.

Anyway, due to the massive amount of love that kids had for the original M.U.S.C.L.E line, it was going to happen that a company would come along and make a product intended to give those now-grownup kids the same excitement that M.U.S.C.L.E figures did back in the day, and in 2015 Super7 released M.O.T.U.S.C.L.E, wee versions of characters from the He-man and the Masters of the Universe line, but in the traditional M.U.S.C.L.E style!

Despite my love of MOTU, I wasn’t overly excited by the idea of M.U.S.C.L.E versions of the figures until I saw the 2016 San Diego Comic Con exclusive ‘can’ of MOTU figures that were multicoloured. There’s something so utterly magical about multicoloured bits of plastic, I really couldn’t say no to picking a set up. After paying exorbitant eBay prices and import fees because I live in the UK, I was eventually in possession of this little plastic tub of multicoloured wonder. 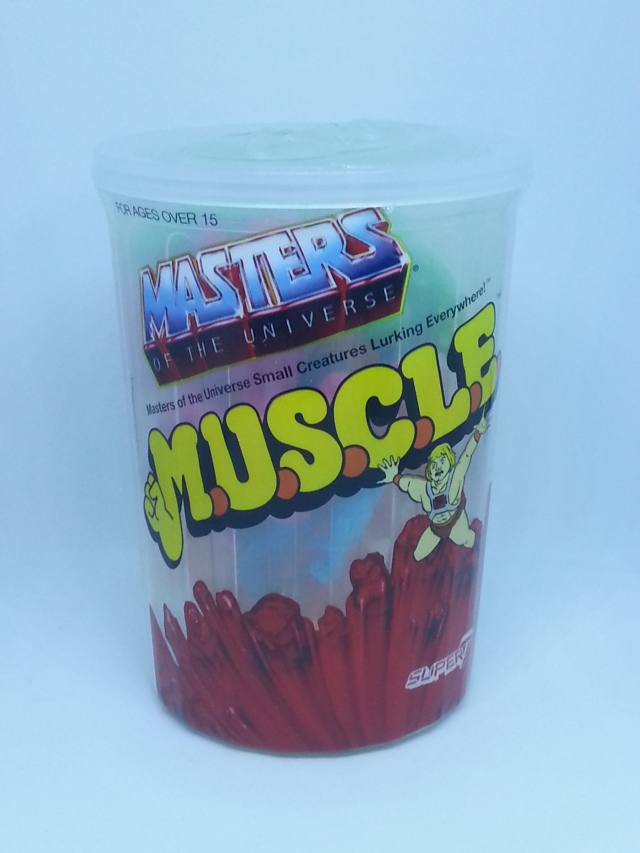 The ‘can’ is fairly simple and is apparently reminiscent of the ones that you could buy M.U.S.C.L.E figures in back in the day. Finding all my figures secondhand, I can’t verify this but it is a fairly nice little container. It even has a Skeletor face on the lid!

As interesting as the container is, it’s nothing on the figures inside. When I first opened the container and the figures spilled out from inside, I was instantly taken back to the ’90s, where I would tear open a packet containing a brightly coloured Monster Alien in my Pocket. or a new pack of Gogo’s Crazybones.

I’m unsure if all of the sets contained figures in the same colours, but all of these containers contained the first wave of minifigures, and they are glorious. 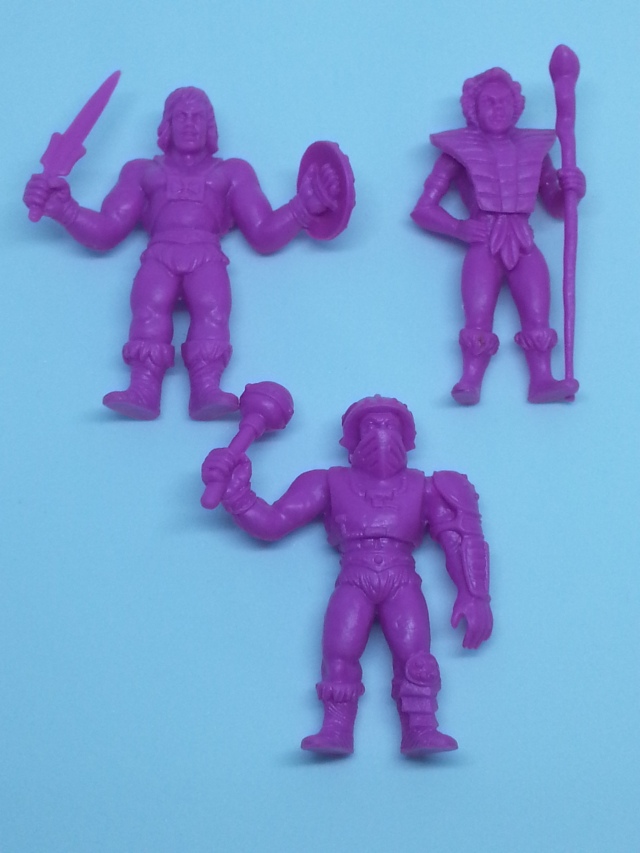 He-man, Teela and Man-at-arms all came in a purple colour. The figures are ridiculously detailed considering the teeny size. I particularly like Man-at-arms who looks like he is angrily shaking his mace at some kids who have dared to kick their ball onto his lawn. 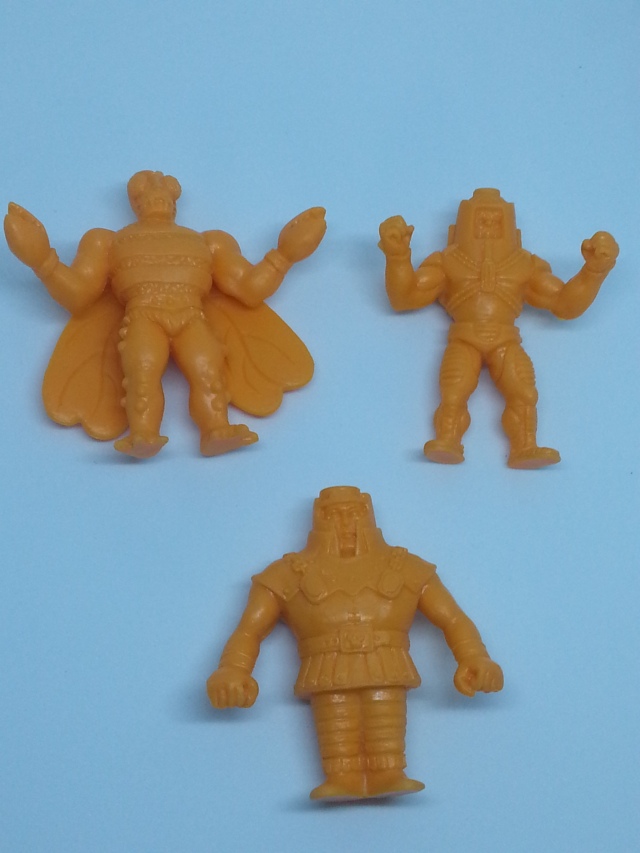 On team orange is Buzz-Off, Man-E-Faces and Ram Man. I actually had to Google the name of Buzz-Off. In my head his name was Buzz-Kill, which sounds much cooler than Buzz-Off. I’m surprised Mattel didn’t release an evil version using the same sculpt with the name Buzz-Kill. They missed a trick there. I would have bought five.

On team Green we have Trap Jaw, (the best MOTU villain ever) Beast Man and the completely incompetent yet totally loveable lord of Skull Mountain himself, Skeletor!

There are only two blue figures, Whiplash and Mer-Man. Mer-Man is probably my favourite figure in the line, as he looks so completely evil. Gone is the look of the surprise from the vintage figure and in its place is a face that is full of razor sharp teeth and blank looking eyes that look like they belong more on an angler fish (where would I be without Google).

Unfortunately it’s Tri-Klops who was never my favourite MOTU villain. Trap Jaw or Mer-Man are so much more deserving of the right to be glow-in-the-dark, but it is what it is I suppose!

Sometimes I buy things that I can’t help but think afterwards “Perhaps I shouldn’t have bought that…” but this is definitely not one of those occasions. This was undoubtedly a sound purchase. Teeny MOTU minifigures in all different colours- what’s to regret about that? This was probably my greatest purchase of the past five years! I just wish I hadn’t hidden them away and forgot about them until recently!

I will probably get the second wave one day, when I can find ’em at a price that I think isn’t too bad. Super7 have done a third wave of these figures as well as an upcoming She-Ra wave so I’m definitely a bit behind. Super7 also do a series of MOTU 3 3/4″ ReAction figures which I desperately want but really can’t justify forking out for. Ugh, the banes of living in the 21st century with so much plastic crap I want and can’t afford.

I think I’ve waffled on enough anyway, and like always I can’t really think of any way to really wrap this post up, so here’s a compilation of Skeletor insulting people.

One thought on “Minifigure Madness! Multicoloured Masters of the Universe M.U.S.C.L.E Minifigures!”