My girlfriend always insists we call at the Disney Store whenever we’re visiting a city that has one, in the hope that she’ll find a Nightmare Before Christmas or Alice in Wonderland plush that she doesn’t own. I don’t mind at all, although I don’t get overly excited by plush toys (with a few exceptions), I do like Star Wars and Marvel Comics and with them both being Disney properties, there’s usually a small selection of toys from both licenses in-store which is always fun to look at. So, whilst we were attending Play Expo Glasgow back in June, we made sure we stopped by the Disney Store. I wasn’t planning on buying anything from there, as there were far too many video games I wanted to buy at the expo, but I still ended up coming out of the out of the store with a small selection of Star Wars figures, mainly because I liked the weird cartoonish style, as well as the fact they were only a fiver each.

Unlike the usual Star Wars figures that appear on here, these toys are a little larger, measuring about five inches tall. The Disney Store also had a selection of Marvel ‘Toybox’ figures, which looked equally as cartoonish, but wanting to keep some spending money for the gaming expo, I decided to leave them behind, along with three Star Wars figures from some of the newer movies.

The first figure I’m going to look at is Darth Vader, as he’s probably the most iconic figure in the set. 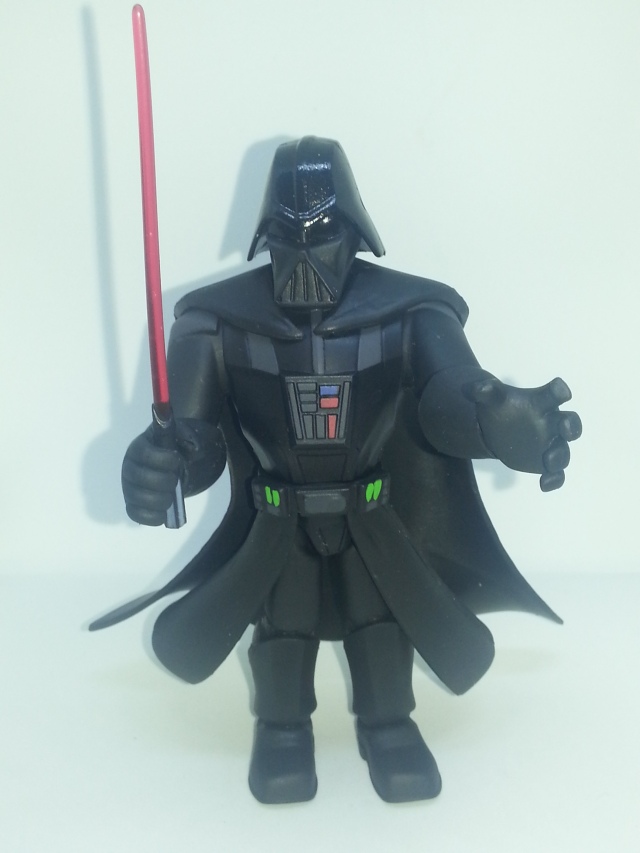 In my opinion, the cartoonish style doesn’t really translate very well with Vader. His legs look too short compared to the rest of his body, and his helmet looks like near the end of Return of the Jedi when Luke helps him take off the top layer part of it. Which isn’t intended here. I do like how muscular looking he is, which is surprising considering I have laughed at overly muscular Star Wars figures in the past, but it works here, probably because of the cartoon style. He obviously comes equipped with a lightsaber but doesn’t hold it all that well. All of the figures feature a whole load of articulation, which would be great if the joints weren’t all floppy when you try and pose them. Darth actually seems to the best out of the bunch for not having floppy limbs, which is something, but he is still probably my least favourite figure of the bunch. Sorry Darth!

The next figure I’m going to look at is Luke Skywalker. I have a lot of appreciation for Luke in his farmhand get-up as my first ever Luke Skywalker figure was a Farmboy Luke from the vintage Kenner line. 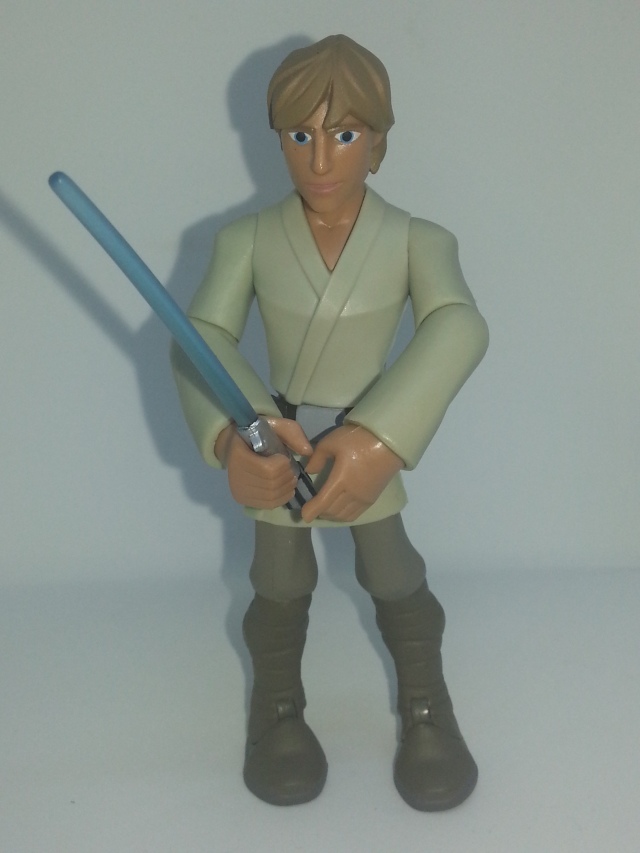 This version of Luke looks pretty good, although perhaps a teeeeny bit like he’s Barbie’s boyfriend Ken. Like Vader, he also comes equipped with a lightsaber. Although his limbs flop around a little, it is still possible to get him in some cool poses.

Princess Leia is next! I really like the style of this figure as it works well with the cartoon style. 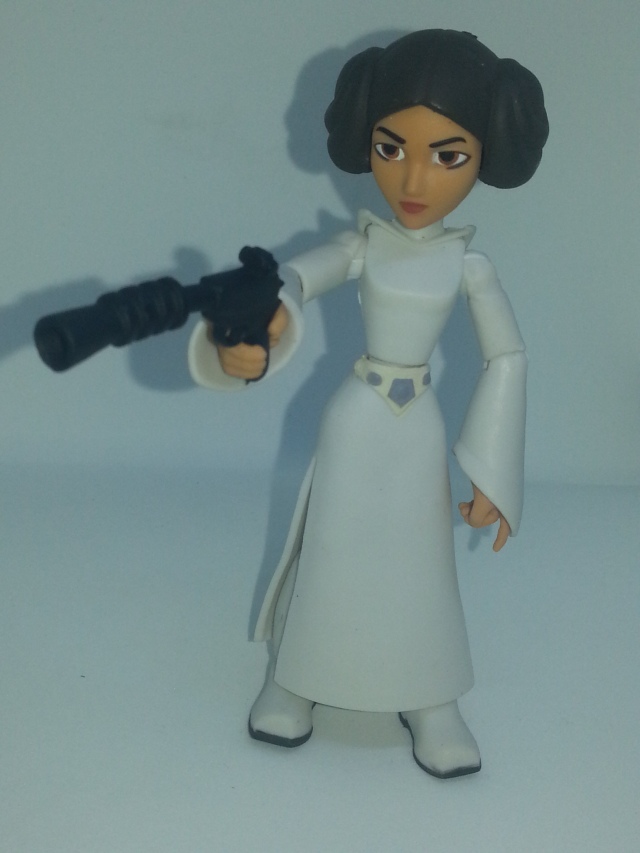 Unfortunately Leia is another figure who suffers for having floppy limbs. It took forever to get her to pose and hold her blaster, with her hand also refusing to hold the blaster in any way other than very loosely. It kept falling out of her hand when I was trying to pose her, so I dunno how kids would fair with getting her to hold it in the heat of battle.

Despite the floppy limbs and her pacifistic refusing to wield a firearm, Leia is still one of my favourite figures out of the bunch, just because I think the attire of Leia from A New Hope translates well into cartoon form.

Onto the final figure!

It’s obviously Boba Fett! This was the figure that first drew me in when we were in the Disney Store. I have owned many variations of Boba Fett over the years, but this looked very different to any of the others. When I first saw it, I actually thought it looked more like Jodo Kast than Boba Fett. I’m aware that if you’re someone with little interest in the ‘expanded universe’ stories from the 1990s, you probably won’t know or even care who Jodo Kast is, but if you want to do some homework, you can find out about Jodo Kast here. Being a kid who was a Star Wars fan in the ’90s, it seemed crucial that I knew the backstories of every character in the books, comics and video games back then, and as such my brain is full of lots of pointless information about characters like Jodo Kast and Prince Xizor and all the other millions of creatures and aliens and other useless shit that will never serve any purpose apart from being able to occasionally write about obscure Star Wars characters on here.

Boba comes equipped with his EE-3 carbine rifle and is without a doubt the worst figure for flopping around due to the loose articulation of his legs. I am kind of on the fence as to whether I want my figures to feature any articulation or not. I felt a bit hard done by that the newer 3 3/4″ Star Wars figures that had limited articulation similar to the older Kenner figures but were still pretty expensive. But at the same time I like Funko/Super7 for their figures which hearken back to a simpler time with little articulation. I think I like articulation so long as it’s done well I think, and these Toybox figures don’t necessarily do that which is a bit of a shame.

Overall though, I do quite like these figures. I probably won’t be buying more as I don’t have anywhere to display them, but they make a nice change from the usual smaller figures which appear on here. If you’re wanting something a bit different for your kids, you could do a lot worse than these, and at a fiver a pop, I don’t think the price was too bad either, although they were on offer so they are probably a little more expensive now.

I think that wraps up my look at the Toybox Star Wars figures! Feels a little strange to praise a Star Wars action figure, it’s not something I’ve done for a while on here. It’s kind of a nice change!