A few years back now, I signed up for www.starwarsforum.co.uk, a site that focuses primarily on collecting vintage Star Wars memorabilia from the late ’70s to the mid ’80s. It’s an awesome place full of laid back, knowledgeable, funny, friendly people. One of the most exciting things to happen is the Secret Santa which happens in December (oddly enough).

I think everyone knows the concept of Secret Santa, but on the forum we have a wish list just to give our Santa a bit of an idea as to what we would like to receive. The limit is usually £30 (not including postage) but this year it went up to £35 just to cover the rising costs of vintage Star Wars toys. There wasn’t a whole load of vintage stuff I really wanted as my loose collection was nearly complete with the few exceptions of some pretty expensive figures, but I put some things I wanted down like vintage trading cards, comics and a some other items. I also put down something that I unwrapped on Christmas morning in 1998, an item that I didn’t think I would receive in a million years as it can be quite pricey and is large and cumbersome. It also wasn’t ‘vintage’ like what most of the other people collect on the site, so I was pretty astounded  when the postman dropped this off. 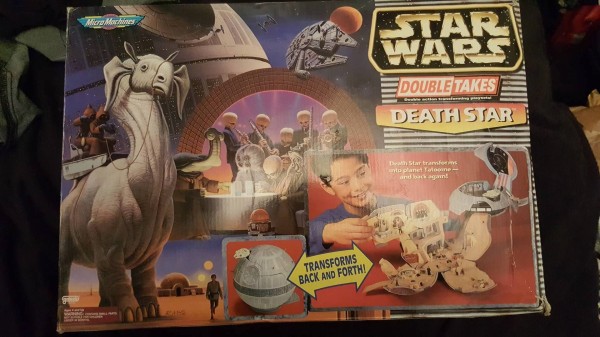 It’s a Death Star that transforms into Tatooine! Just look at it! The box art alone makes this the best thing to have existed ever. I don’t think  I appreciated the artwork as much as I should have as a kid. It was only as an adult that I realised it had been painted by Ralph McQuarrie, the concept artist for the original Star Wars trilogy. The Mighty Max Skull Mountain playset that I looked at in my Halloween Countdown is similar, featuring amazing artwork that really makes the product come to life. Everything is clear and photographed these days and I really miss the time when things had paintings to show just how awesome they were. It’s kind of reminds me of ’80s home computer or Atari games, which featured amazing cover art that was meant to really sell the games to you, the only the difference being that the games were often crap. These toys are fantastic.

The back does feature a photograph. You can see the interior and the bunch of the little figures that came with the set, which I will look at in a bit. But here it is, out of the box and put together in all of it’s planet ending glory. It’s the Death Star!

It has a little clear plastic sticky-out-bit to put the Falcon on which  is kinda neat, but I think I would have preferred it without. When I picture the Death Star in my head I don’t imagine some clear thing hanging off it. It still displays nice enough though, and opening it up is where the good shit really is.

It is definitely a very very condensed version of Tatooine. Owen and Beru Lars moisture farm seems to be located just meters away from the Mos Eisley Cantina, which is now up a flight of stairs and seems to be an open air bar. Ben Kenobi’s home is directly opposite the Lars homestead and is now a doorway into the wall. It makes me think that the first part of Star Wars would be a lot quicker if R2 just had to wander across the street to find Ben. 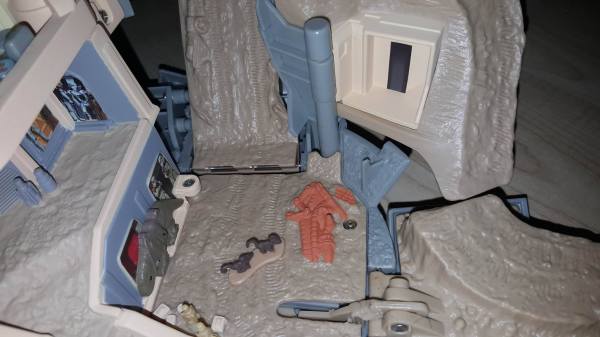 The set comes with five little figures and the Millennium Falcon. Here’s a better look at them that the picture on the box. This picture wasn’t taken on the back of a family pet by the way, these figures are sat are on a furry blanket. 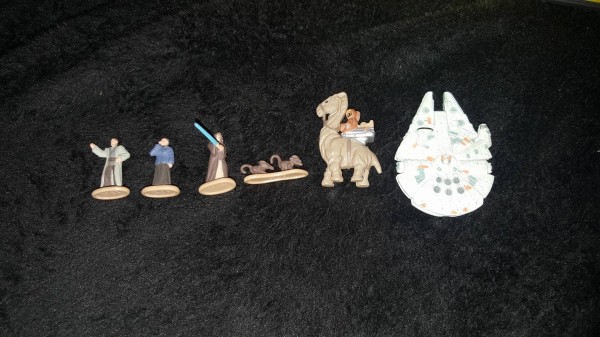 The figures are comprised of  Owen and Beru Lars, Ben Kenobi, some ‘scurriers’ (which I always thought were just womp rats), a Ronto being ridden by some Jawas and the Falcon.

Do you see a small problem here? I did back then. Where is Luke? Do kids really want to play with Owen and Beru Lars instead of Luke? No they didn’t. I know because I remembered the small amount of disappointment I experienced when I discovered this back then. Nowadays I can totally see playtime potential with Aunt Beru and Uncle Owen. That scene where they make enough money for them to hire some more farm hands and then buy Mos Eisley Cantina may not have made it in the film, but it can sure as hell happen now, which you can see with this picture of Uncle Owen telling the Jawas that they can’t bring their Ronto into the Cantina, whilst Beru yells as she is worried that they are going to have to clean Ronto shit out of their new nerf hair rugs. 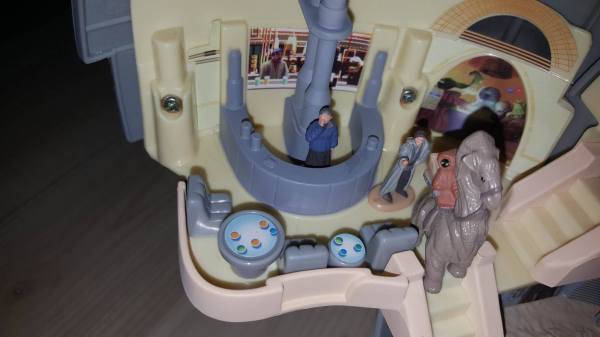 Though I have made fun of this set somewhat, it really is amazing and holds so many memories for me. It has a few nifty little features that really make it a lot of fun. The moisture farm main building is on a hinge so you can open or close it to put the figures in. There is also a little pop up ‘secret land mine’ right by the farm which I am guessing is damn inconvenient if you have to work there. The best thing though is the ‘flip-over skeletal remains’. If you have had enough of Aunt Beru and Uncle Owen you can make them meet their demise and see their smouldering corpses by flipping over a little square patch of sand. It’s pretty gory by today’s standards (and I doubt you would see anything like that in modern playsets), but it’s something I totally appreciated as a kid. There is also a little extendable ramp that pulls out which is useful if you have a little Sandcrawler which needs to drive up from your living room floor to the Lars minefield/farm. 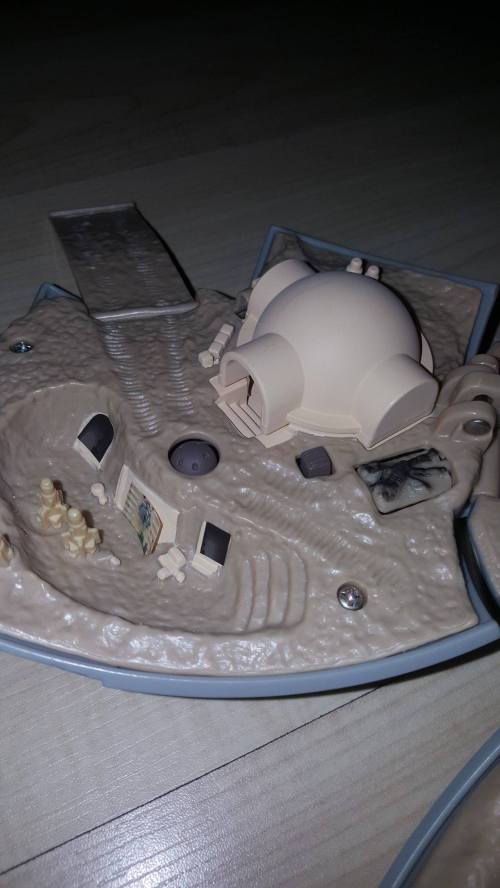 The other neat little feature is the Tusken Raider that pops out when you push down on a little button. I loved the Sand people in the original film and always wanted one in some toy format and this was the closest I got for a while. I would have liked to have had a removable Tusken but this one that was fixed in place was enough for me to have some donkey braying, Jawa blastin’ fun. 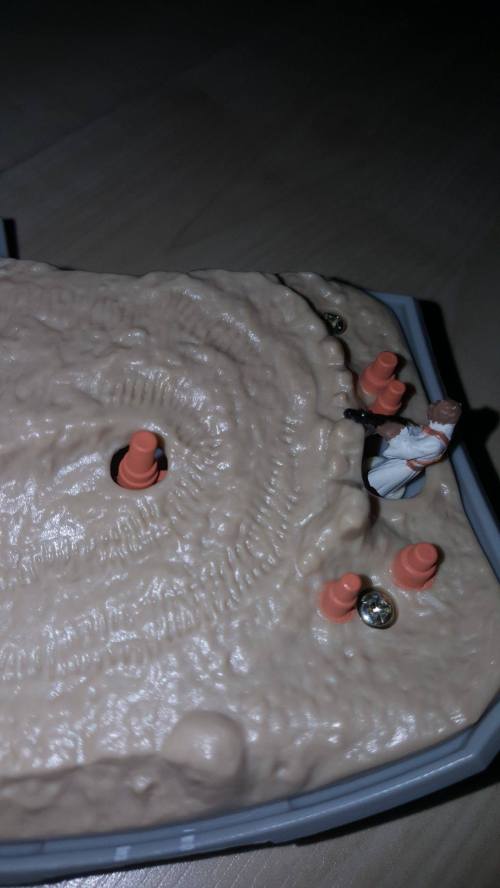 Although not a feature in the sense that it isn’t ‘action’ orientated, I really really love the Cantina band that is moulded into the wall. The Cantina band just screams classic Star Wars to me, and though I never ever desired a toy of them (as I didn’t think I would get much play value out of a toy band) I love that they aren’t just a sticker on the wall, they actually look like they are standing on a stage.

The top of the set is meant to be the Death Star hanger. The little clear thing that the Falcon pegs onto when the set is closed sits nicely in the hanger when it opens up. There isn’t much else in there apart from a little pullout  thing which is meant to be a tractor beam that you can peg the falcon onto and pull in like in the film. 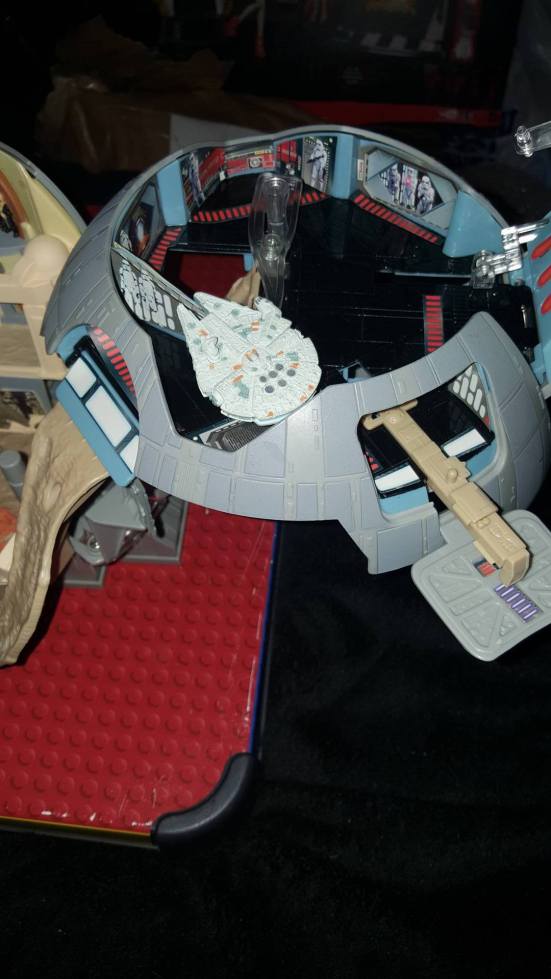 The top part of the hanger is meant to be like space so you can re-enact a dog fight if you peg on the Falcon and another spaceship, and a little wheel (which is the top part of the Death Star when the set is closed) makes the attached ships rotate. 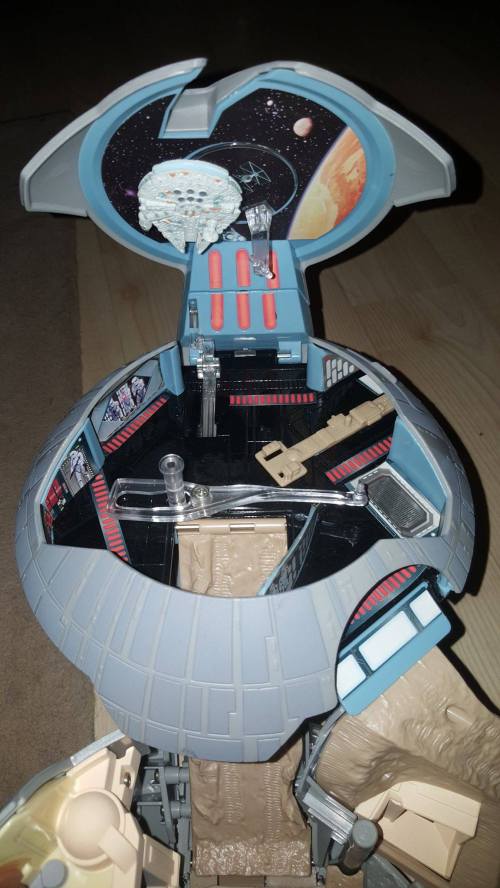 I think that concludes my look at the awesome Death Star/Tatooine playset. I do think it is a strange idea for a toy, as they could have just put the interior of the Death Star as the interior of the Death Star, not Tatooine. I also really think this set needed a Luke Skywalker figure as I didn’t really want an Aunt Beru, Uncle Owen or ‘Scurriers’ figures as a kid. But this aside, I freakin’ loved and still love this set. Tearing the paper off this really brought back some great memories.

To my Secret Santa, whoever you are; thank you so much! I hope you had a fantastic Christmas. I had somewhat lost the festivities with having to go back to work boxing day, but this arriving in the post certainly brought it back some, along with a lot of great memories.