Lego has been in my life (and in the feet of anyone I have ever shared a home with)  since I was about four years old. As a brand it has come a long way since the red bucket of bricks I first owned but the basic premise of it has stayed the same despite there being a whole load more of types of bricks, themes and even licensed themes (based on movies and video games) since that first red bucket of bricks. Lego has always been something I have felt it was okay to go up to the counter and purchase without the pretense that I was buying it for a younger relative or something (though I have bought a fair amount of small sets for younger relatives as my Uncle used to buy them for me). Maybe because it’s more acknowledged that Lego has a fairly large amount of adult collectors, or because artists and video game designers have used it in their projects (Hideo Kojima mapped out the areas of Metal Gear Solid using Lego bricks), that in my head it was never as awkward for me going up and buying a Lego Lord of the Rings Shelob Attacks as it would be if I were to go up and buy a Darth Vader Potato Head. It’s for this reason that I never owned a Darth Vader Potato Head, and I will always be somewhat disappointed with myself for that.

Anyway, two licensed themes that Lego probably won’t be giving up the rights to for the next twenty years is Star Wars and Marvel Superheroes. Disney have planned movies coming out for both franchises for a hella long time, which is to be expected really as both franchises make money and with new movies out every year, it means that there  will always be new scenes, vehicles and characters for Lego to make new sets based on, like this one from back in 2015. 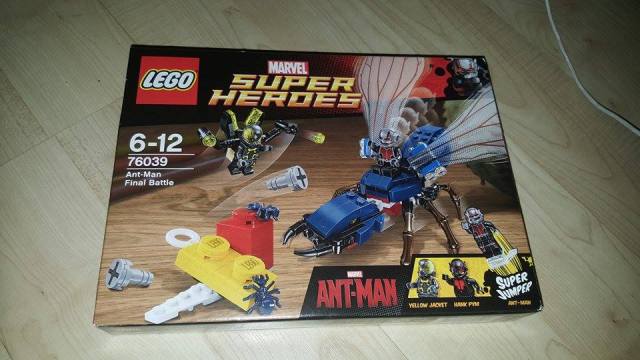 It took me a while to actually sit down and watch Ant-man. It was a movie I had initially been somewhat dubious about. I didn’t know how it would fit into the established Marvel cinematic universe as it looked a bit silly and too much like ‘Honey I Shrunk the Kids’. But then I didn’t think Avengers would work either as the characters were so different that I couldn’t imagine them meshing together for a single story. It was the same for Guardians of the Galaxy and more recently Doctor Strange, all of which I felt were worlds apart from what fit with the established Marvel universe. Luckily, each time my doubts have always been unfounded and they have all been entertaining, fun movies in their own right and have contributed to the larger universe despite each having their own pace and tone.

Ant-man was more of a heist type movie but still had some really fantastical scenes. The end fight scene was hugely entertaining, taking place in a little girls bedroom whilst both the protagonist and bad guy were shrunk down and it’s this scene that is being portrayed in this Lego set. So without any more rambling (and there has been a shit-ton of that so far), here is a look at it. 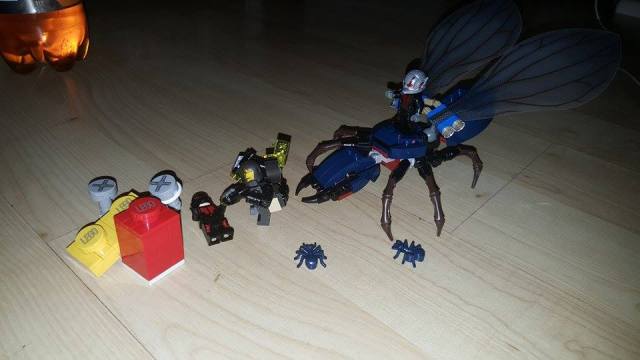 The sets I construct never look as exciting when I take a picture of them as they do on the box. I might have to throw some crazy Photoshop into the mix in a future review, But this set does contain a ‘giant’ ant, so it is automatically pretty fucking awesome without me having to make it look interesting.

Their real names are Yellow Jacket, Hank Pym and Ant-man. They are pretty nice figures but I do take some small amount of issue with them, which I will bitch about shortly. I really like how Yellow Jacket has actual Lego pieces to make up his ‘wings’ and ‘stingers’. What I don’t like is that the helmet doesn’t look that much like the one in the movie. Maybe it’s just hard to replicate it in Lego form. I dunno. It’s not that bad I suppose. The second thing I didn’t like was that there isn’t any hair pieces for the figures when they aren’t wearing the helmets.

If previous sets like the Guardians of the Galaxy line hadn’t already included hair pieces as well as helmets, it wouldn’t be so bad. It just seems a bit pointless having face printing if you can’t see it without taking the mask off, and Hank and Scott (Ant-man) look weird without hair. Yellow Jacket is bald in movie so it’s not so bad.

Hank and Scott both have printing on both sides  of their faces just in case you want to make it look like they have both been informed that they will not be possessing any hair in the foreseeable future. Hank looks pissed and Scott has the sad and confused expression of a kid who had just found a turd in his Christmas stocking.

One final moan about the mini-figures is that Hank did not appear in this decisive battle in any way, nor did he ever wear the Ant-man in the movie suit apart from a flashback from about twenty years prior. My guess is he was included just so they could justify the price of this set, and I bet kids wouldn’t be keen to play with him if he was just a guy in a suit and tie like how he appears for the most part.

One annoyance that I just noticed is that this Hank Pym doesn’t have a beard like his movie counterpart. C’mon Lego! It’s almost exactly like you just stuck Gandalf’s head on a less detailed Ant-man body and called it Hank Pym.

The best part of this set is the Lego ant. 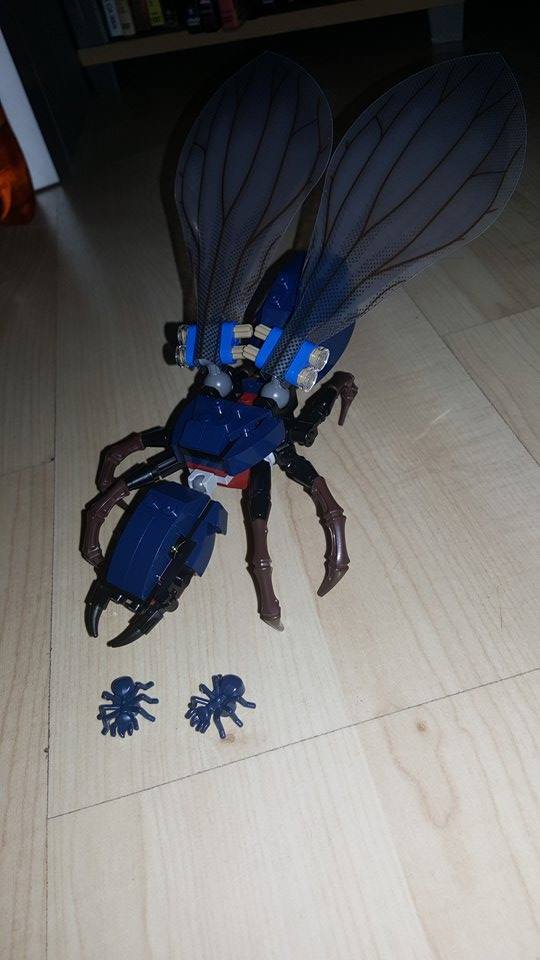 This set actually got recalled initially as the ant legs couldn’t support the weight of the body. The version I own is the improved one and even with this the legs kinda sink if you push down too hard on it, or you are trying to sit Scott on the back of it. Aside from that though, I have no real complaint about it. It looks like an ant (though perhaps could do with antennae) and I love the clear, soft plastic wings. The set also comes with two little blue ants which are nice too. Plastic bugs are awesome.

The other part of the set is the Lego bricks. The set comes with two little pieces so you can make it look like Ant-man has actually shrunk down to Lego brick size. 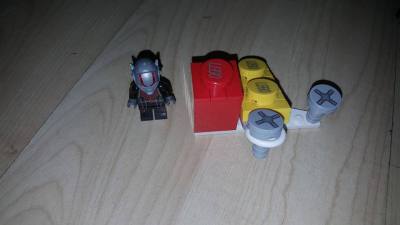 It’s a neat feature, but I really don’t understand the need for inclusion of the screws. The whole thing is a little catapult that fires the screws into the air if you quickly push down on the brick but never in the movie (that I have noticed) do you see any contraption made of Lego which shoots screws. Screws and Lego don’t really go together, so this seems a bit weird.

Overall though, I do really like this set. I think the saving grace for it is the ants. It can be quite pricey now and doesn’t seem too common, I don’t know if it’s because of Lego recalling it or maybe just because it is the only set where you can get an Ant-man minifig for now, as the Civil War airport battle set just has giant and micro versions of him.

One last thing that I nearly forgot about is that Yellow Jacket comes with another head, an all black one which makes his helmet look a little bit more screen accurate, and Ant-man comes with a flicky, jumpy stand thing (which I am not that keen on as they just seem to break when I try it). 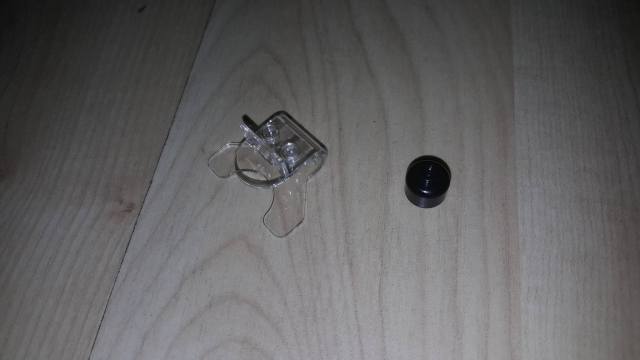 This isn’t my favourite Marvel Superhero Lego set that I own but it is still pretty neat as I really dig giant bricks and Lego ants of various sizes. If you can find a set somewhere cheapish then you shouldn’t hesitate to pick it up as it will probably go up in price until another Ant-man film comes along, which will spawn more Ant-man minifigures.