So, what do you get if you cross a bloke that looks a bit like Bjorn from Abba with the Terminator and a Wild West/Lone Ranger type character? 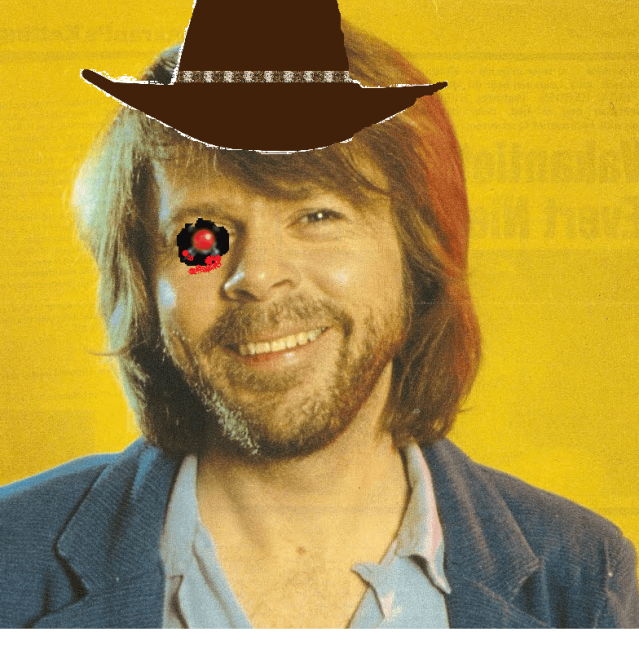 One of my favourite figures in the Masters of the Universe line! Rio Blast! 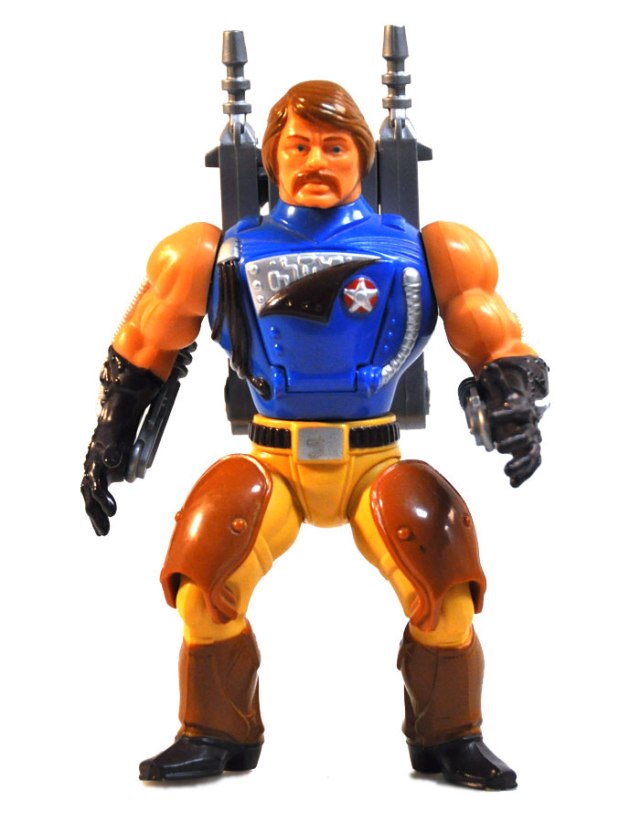 I first encountered Rio Blast when I bought a box of BraveStarr toys off a car boot sale as a kid in the late ’90s. Even though I didn’t recognise who this character was, he was sat at the bottom of the box along with BraveStarr and Deputy Fuzz. Due to his resembling a futuristic cowboy, I didn’t really think too much about his inclusion in the box, even if he looked a little out of scale with the other figures. It was a good while later that I realised he was actually a member of He-man’s Heroic Warriors, and not part of the BraveStarr lineup.

Whilst every MOTU figure looks like they are perfectly able to take care of themselves in a fight (except Orko), Rio takes it up a step. On his back is a massive cannon that unfolds and mounts onto his shoulders with a targeting visor. 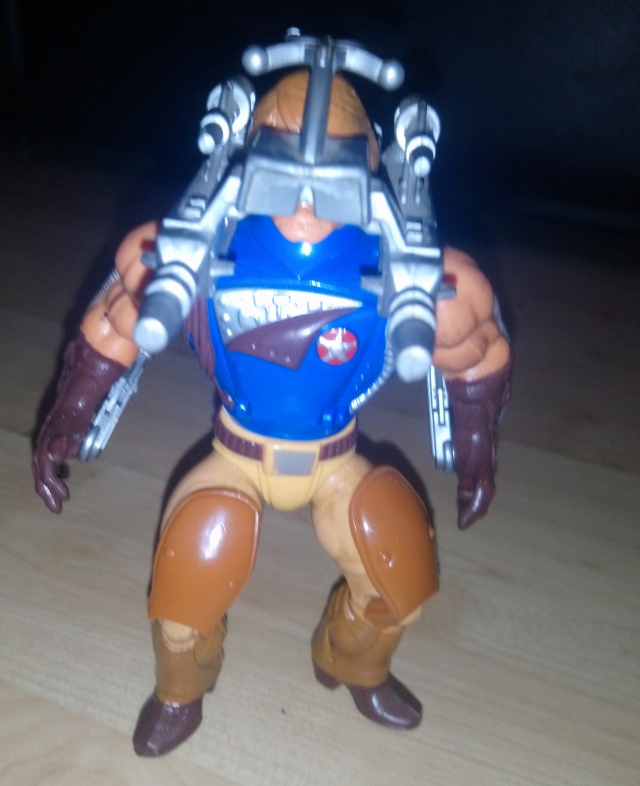 If that wasn’t impressive enough, he also two has two fold out weapons that swivel out from his wrists.

I was never sure if they were supposed to be pistols or nozzles for some flamethrower type weapon, as he does have little pipes going up his arms. Nevertheless, whatever they were, they were gonna do some damage. And if that wasn’t enough, there was always the cannons located in his legs… 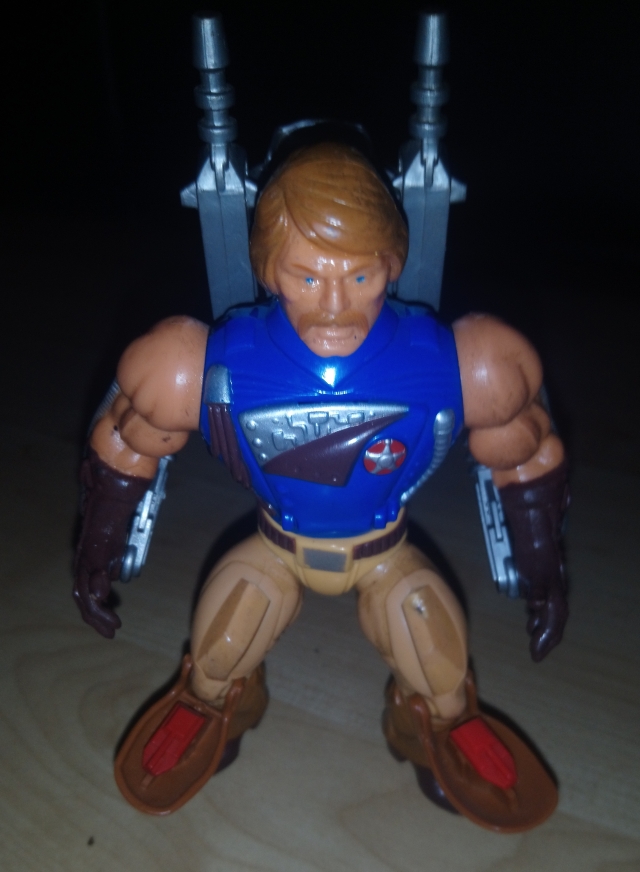 Cannons in his legs! How rad is that?!

And if you aren’t convinced this is one dude you don’t want to mess with, he has one final weapon to blow you away with! 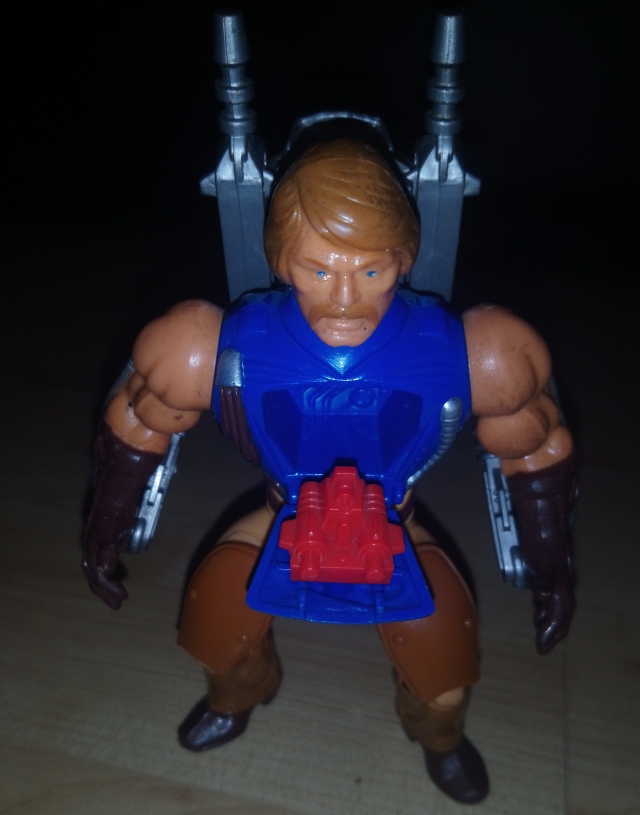 Pow! A cannon pops out of his stomach! So in all, you have a robot cowboy with guns in his legs and stomach, a back-mounted cannon, and two pistols/flamethrowers in each wrist.

This walking arsenal of weaponry seems like he’d be a match for Skeletor and all of his henchmen all in one go. Who needs an overly preachy, sword swinging, semi-naked man with a pageboy haircut when you can have a cowboy rocking a fierce moustache and a multitude of weaponry built into his body? 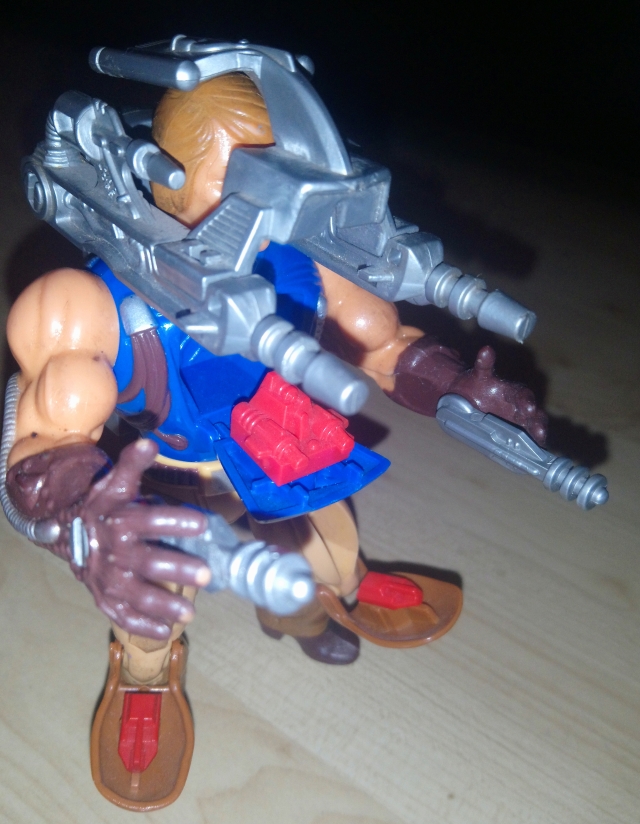 I don’t think Rio Blast gets the recognition he deserves, probably because he came out quite late into the MOTU line, but to me he is one of the more memorable and impressive figures in the MOTU series, and definitely one of my favourite childhood toys.

One thought on “Random Action Figures! Masters of the Universe Rio Blast from 1986!”