Do you know what would be completely shitty? if you were having a lovely day out in the Arklay Mountains on the outskirts of Raccoon city and you ended up getting chewed on by a wandering zombie, which would probably result in you contracting the T-Virus, guaranteeing a slow and painful death as well as you also becoming a wandering corpse like the zombie that just bit you.

The only way that this could be any less shitty was if you were somehow prepared for the possibility of getting chewed by a zombie and were equipped with an antidote to counteract the T-Virus. I give you the T-Virus antidote, in drinkable canned form! 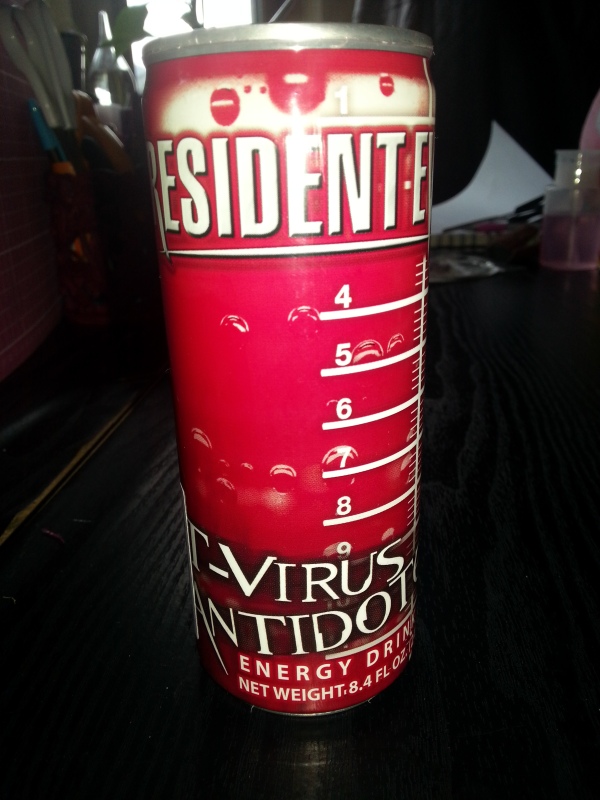 I love Resident Evil so when I saw a small selection of imported American energy drinks on eBay, I knew it was definitely a sound investment, despite the fact I had no plans to go anywhere near Raccoon City, ever.

The can didn’t really feature much in the way of artwork, but did have a nice blood/syringe needle kind of design.

Cracking it open, there’s no getting around it, the contents of the can look like pee. The kind of colour it goes when you’re really dehydrated. Luckily for me, it didn’t taste as offensive as it looked. I’m unsure if it’s just this flavour energy drink, but it tastes nothing like how energy drinks here in the UK taste. This one almost tasted like Sprite, but like a slightly sour version of Sprite, whilst also being incredibly sweet.

It wasn’t bad anyway but I did seem to get a weird stomach ache about two hours after drinking it, which I took to either be my body becoming immunised to any potential T-Virus infections, or that highly sugary, caffeinated American soft drinks don’t play nicely with my gut.

I ended up buying a few cans of different video game themed energy drinks from the eBay seller with the intention of reviewing them on here, and the seller was a such a nice guy that it feels only right he gets a mention on here, so if you have a hankering for some video game beverages here in the UK, you can find them here along with all sorts of other weird and wonderful imported sweets and goodies.

So in-all, the T-Virus antidote isn’t bad, although it may cause some mild discomfort in the stomach if chugged too quickly. It’s probably a little expensive to be buying just as a random drink, but as a collector of video game merchandise, the can displays quite nicely next to all my other weird gaming stuff, like Final Fantasy XV popcorn and Pacman scratchcards.

As I can think of no proper way to end this post, so I’ll leave you with a video highlighting some of the magnificent voice acting in the first Resident Evil game. My personal favourite is about 4 mins 50 seconds into the video with the injured S.T.A.R.S team member Richard, but the whole thing is just brilliant.