Whenever I see a cassette tape, I am instantly transported back to my childhood. To me, cassette tapes will always be more synonymous with the many happy hours sat playing computer games instead of listening to music. I grew up a little too late for me to feel the warm, glowing blanket of nostalgia that many experience whilst thinking about the ZX Spectrum, but if my early childhood could be summarised with just a few sounds, it would be the clunk-click of a cassette player closing, the tapping of keys on a keyboard followed by the banshee-like screeching of that cassette loading, either on the family Amstrad CPC or my cousin’s Commodore 64.

Despite my lack of familiarity with the ZX Spectrum, many of the games that I grew up playing and loving were actually ports of games that originated on the Speccy, but it was only when I bought a ZX Spectrum Vega (a TV plug-and-play console loaded with Spectrum games) in 2015 that I found this out. Childhood favourites like Chuckie Egg and Dizzy were all very similar on all of the home computer releases, with perhaps a few tweaks to the sound and graphics, to really make the most of the superior memory available with the C64 and CPC releases.

Despite my never actually playing a ZX Spectrum as a kid, I’ve always loved computer and video games and I would have been pretty ignorant if I didn’t realise the importance of the ZX Spectrum in the British gaming scene. Not only did it spawn a generation of developers and game studios; it also proved to the world that gaming could be a viable, profit making venture in a time when the market for video games was crashing in North America. It also demonstrated that the UK had something new and exciting to offer in the fields of technology and affordable home computing.

So, fast-forward to last year. I had decided to go back to college the previous September and one of my English assignments was to write a piece on something I liked, which was a bit of a vague task. Being a fan of retro games, I decided to do my Q&A with Roger Kean, editor of the legendary Crash magazine, which was the go-to place for reviews of ZX Spectrum games back in the ’80s. My tutor wasn’t happy with the final piece and wanted me to do something else (which I ending up doing), but I still felt pleased with my Q&A, though in hindsight I wish I had cut out babbling about Amstrad games.

A few weeks later, I saw a Tweet or Facebook post by Chris Wilkins of Fusion Retro Books inquiring if anyone would be interested in doing some game reviews for an upcoming edition of Crash, that would be funded by Kickstarter. It would be a revival of the magazine but as a one-off hardback annual, covering a multitude of games that had come out since the last issue of Crash back in 1991. I had done game reviews on this site before, and looking back I can see that they are pretty lousy, a whole lot of babbling that almost felt like I was doing a walkthrough guide as opposed to an informed review. I decided to offer my services anyway, if only to play some new games and improve my reviewing. It was only afterwards that I thought about the fact that if he accepted my offer, my reviews could be inside Crash. The Crash. The magazine that meant so much to so many people. The Crash that helped a plethora of kids and gamers make the best decisions on how to part with their hard earned cash. If I had initially stopped to think about what an iconic and historic thing Crash was, I would have probably thought “I’m not worthy!” and wouldn’t have messaged offering!

After Chris had spoken to Roger Kean, my offer of help was accepted which was a total surprise. Roger has since told me that the fact I was from Ludlow (the town where Crash publisher Newsfield was based) was a contributing factor to why my offer of help was accepted, as the Crash team used to enlist the help of kids from the local school to test and review games, so he wanted to have a Ludlow connection with the Crash annual. Despite my living there for a good few years, Ludlow did very little for me and yielded me very few opportunities, so it was nice that it was finally paying off!

I was shown a list of games that had all come out over the past couple decades, some that I had never heard of, and some titles that were very familiar. There was a Castlevania game on there (a series I have a lot of time for!) as well as a Donkey Kong Jr. game and a few other interesting sounding ones. I told Chris I definitely wanted to do those two at the very least, and then set myself the task of homework! I really wanted to get the proper feel of Crash reviews, so spent days pouring over online archives of Crash magazine reviews, to really grasp the way that some of my predecessors had written. I also played quite a few Spectrum games that weren’t on the list that I had never even heard of before, just to refresh on how the system worked and played. I then looked up Crash reviews for those games, just to see if they matched up with my opinions. Sometimes they did, and sometimes they didn’t, but usually the former. It was an interesting and pretty enlightening process.

I worried a fair bit that perhaps my years of playing Playstations, Xbox and modern Nintendo products would impair my judgement of what made a good game, forgetting that I also still played a helluva lot NES, Sega Mega Drive, Atari 2600 and Amstrad CPC. I was concerned that if people thought that I didn’t grow up playing the ZX Spectrum, they would completely disregard any of my reviews and stuff. I overthink a lot of things! In the end, I sort of figured that perhaps it would be a positive that I didn’t grow up with the Speccy, as my opinions wouldn’t be clouded by nostalgia, and I could primarily base my reviews on how much fun I had playing each game, as a truly fun game can easily transcend any of the graphical or technical limitations placed upon it.

In spite a lot of stressing and worrying that my contributions would somehow sully the name of Crash (as if I had that power!), I had an absolute blast doing it all. I played ZX Spectrum games long into the night, tried to stay awake at college and work, came home and played more Spectrum games, and tried to find the time to write about those games. Some of the games were amazing, and truly blew me away. Some were just okay, but all of them were worth playing, just to see what people were doing with thirty-something year old technology!

I don’t know if I will ever make a career out of writing game reviews (I mean who would then write about Boglins, what insects taste like, and stupid looking Star Wars action figures?) but I do feel that I could probably write a far better game review now than I could before all of this.

My copy of Crash arrived in December, and it was bloody fantastic, if a very strange experience. Actual things I had written were encased in a cover that could only ever have been done by the legendary Oliver Frey! Stuff I had written! Me! I felt very humbled by this, as well as the fact my reviews would be on pages next to other writers who are considerably more talented than me, and who had been doing this for a lot longer. 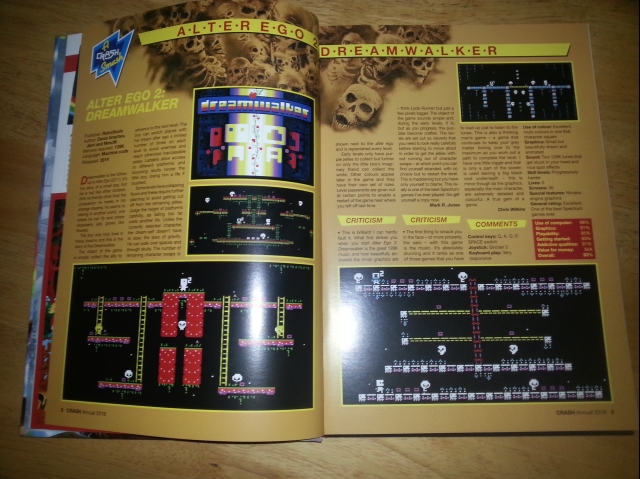 The book itself is really cool, perfectly capturing the feeling of annuals of yesteryear, but at the same time featuring a lot more content than any annual I’ve ever owned. It’s also a teeny bit taller than any of my annuals that I could find lying around, though I don’t think the following picture really shows this, but it’s late and I’m too lazy to take more photos.

Not only does the book feature game reviews, it also has loads of really interesting facts about the original publishing process, as well as things that just couldn’t NOT appear in a Crash annual, like hints, Olibugs, Lloyd Mangram and one my personal favourites, a Jetman comic strip!

The best part of it all was seeing peoples reactions upon receiving their copies in the post. It really seemed to bring back some memories of reading Crash to so many people. There was a bit of an embargo on uploading pictures of the front cover, as some recipients were getting their wives or partners to wrap their annual for them for Christmas, but a few enthusiastic souls didn’t realise and eagerly uploaded pics of their new arrivals to Facebook and Twitter, bless ’em! 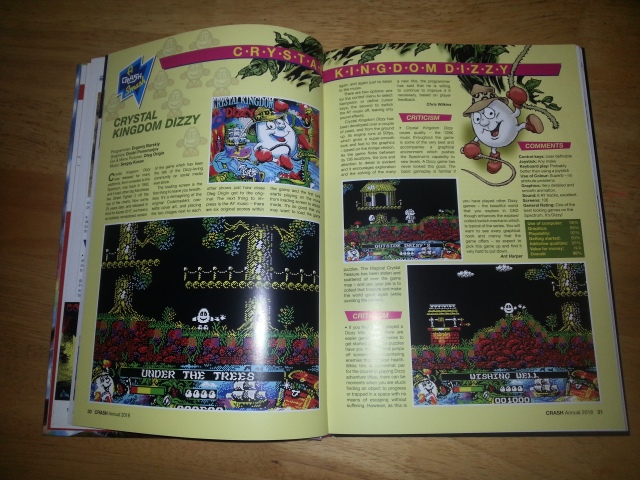 For the most part, the reviews of the annual were mainly positive, and I’ve only really found one person online saying that they felt that it was very evident that some of the reviews in the annual weren’t written by experienced writers and that bar should have been raised, which I was gutted about, as it was something I stressed and worried about a lot during my writing. But I guess you can’t please everyone, and at the end of the day, it’s hard not to feel chuffed when you have a published ‘Crash Smash’ review of Castlevania in a publication as iconic and beloved as this!

So yeah, the Crash Annual is amazing and is packed with a whole load of fun stuff. If you have any appreciation for the ZX Spectrum or retro gaming, you should probably do yourself a favour and go and buy it from here.

I’ve still not really come down from the buzz of being a part of it all. It’s hard to not feel like “nothing is ever gonna top this!”. I used to wonder as a kid, how characters like Luke Skywalker used to go back to a boring life after all of their adventures destroying Death Stars and ending the rule of Sith lords. I’m not in anyway likening my writing of a few game reviews to the heroic exploits of characters in movies that have become a cultural phenomenon, but at the same time… perhaps I am a bit, haha.

So until Retro Gamer contacts me and says “Ryan, we need you!”, I’ll be sat here playing with my Boglins and tucking into lollipops with bugs inside them. It’s still a lot better than living alone on a deserted island and squeezing alien dinosaur’s nipples for a glass of green looking milk, like poor Luke Skywalker ended up doing!