Nowadays, there are quite a few video games that feature witches as playable characters in games (Bayonetta  being the most recent that springs to mind) but back when I was a kid, witches were almost always just there to fill the role as a villain, or a side character at best. But then I discovered Cauldron!

Cauldron originated as a licensed game based on the movie Halloween, but changed to be just based on the Halloween holiday and nothing to do with the 1978 slasher movie.

Released on the ZX Spectrum, Amstrad CPC, and the Commodore 64, all versions of the game are fairly similar. You play as a witch who must collect different ingredients in order to make a potion that will allow her to defeat the Pumpking, though this is not an easy feat. The witch has to avoid bats, ghosts, seagulls, skulls and many more fiendish enemies, and must find keys to open dungeons in which the potion ingredients are kept.

The game has two distinct modes of play, flying/shooting  and platforming. Neither of these modes are perfect, but I have far fewer issues flying than I do with platforming.

There would be little point in playing as a witch in a game if you couldn’t ride on a broomstick. Thankfully in this game you can and it’s fun, though you’re constantly having to avoid or shoot enemies so you don’t really get the chance to appreciate just zooming through the air on a broom which is a shame. You also have a magic meter, which sadly is also a health meter. If you fire magic to kill an enemy, it depletes. If you get hit by an enemy, it depletes a lot more. It also depletes slowly if you are just flying through the air on your broom so you constantly have to weigh up whether it’s best to try and outmaneuver enemies or to kill them with magic. If your magic meter depletes all the way to 0%, you lose a life. It’s a pretty ruthless game, but there are some magic points littered around the world which will fill your meter back up, but I ended up losing lives a few times trying to get to them.

The flying element is definitely the best part of the game. And the platforming is just awful. Platform games can be a lot of fun when done right, but Cauldron sadly doesn’t do it right. The witch just doesn’t move well when not on her broom and everything is stiff and awkward, with the witch often having to teeter right on the edge of platforms to jump and reach another higher platform. I gather that an old witch isn’t going to be the most athletic, but it’s not really fun having to risk falling of a ledge just to reach another ledge. And here is my biggest issue with the platforms. The game punishes you for not being able to see the next screen!

In this screenshot here, I am just about to leave the screen. I’ve marked the direction I’m going with a red arrow.

That’s fine and hunky-dory. So yeah, I’ll just move to the next screen. 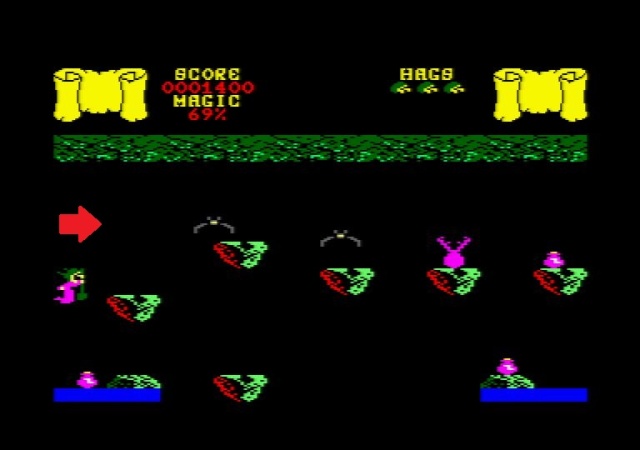 Woah, what the hell? I was supposed to jump to a platform on the next screen, THAT I COULDN’T EVEN SEE?! Most platform games have it so that if you’re on a platform on one screen, the next screen will be a continuation of that same platform. But not in Cauldron. In Cauldron, you better know where every damn platform in the game is. Otherwise you’re gonna die. Many, many times.

It’s a shame, because although I really like Cauldron, I haven’t got the patience to sit and memorise where every single platform is or map them all out, so I doubt I will ever finish it. ’80s games really were unforgiving bastards.

The final thing I will say about the game is that I love the locations. Your adventure takes you over woodlands, graveyards, the ocean and volcanoes, with every dungeon looking and feeling a little bit different to the last.

Overall, I don’t know whether I would recommend Cauldron or not. It’s damn infuriating, but it’s also fun and spooky. If you were to play it, I would suggest playing the Commodore 64 version as the broom-riding is a lot more fun with scrolling gameplay as opposed to lots of different screens. But the dungeons aren’t scrolling so if you’re anything like me, you’ll still be getting pissed off at falling in lava or water or just dying from overly large falls over and over and over again.

Although Cauldron was considered difficult at the time, it was successful enough for it to get a sequel. But that’s a game for another day!