If you were a child in the early ’90s and your parents didn’t like you enough to buy you a Gameboy or even a Tiger electronics handheld game, you might have been the recipient of one of these. 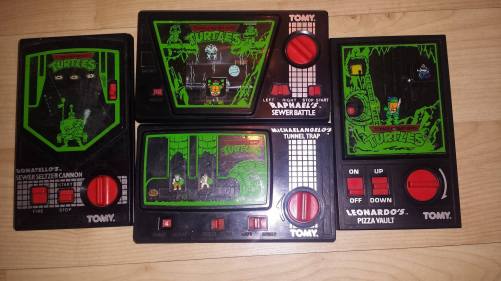 Powered by a wind up mechanism (kids, look it up, there actually was a time where things could operate without a battery), these handheld games are supposed to be akin to early arcade games where the goal is to get a good score. They are actually really neat. I can’t find too much information about them online but Tomy released a whole bunch of these games called the ‘pocket arcade’ series. I am guessing they were supposed to be cheaper alternatives to many of the popular electronic handheld games of those days. Some of ’em are pretty challenging and are actually really fun to play, as well as being technically impressive.

A lot of them were just the same design  with a different character or  artwork to make them different. Here is Donatello’s Sewer Seltzer Cannon next to Astro Raid. They are both identical to play but one obviously has a turtles design and the other looks more like Space Raiders. 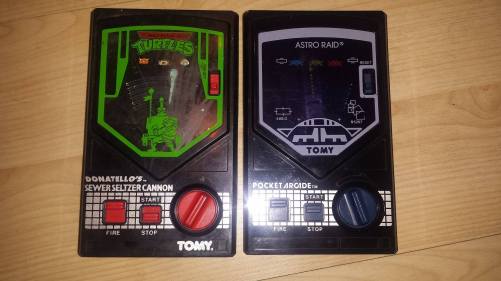 I am pretty sure that these Turtles games were only available in the UK and Ireland as the  Turtles logo has the word ‘Hero’ not ‘Ninja’ in it, as due to censorship here the cartoons weren’t allowed to be aired with the word ‘Ninja’ in them. It was deemed that ‘Ninja’ was too excessively violent a thing for a kids cartoon. (Thanks a bunch Thatcherite Government). It was probably the same moronic line of thought that ensured that the Stormtroopers didn’t carry blaster rifles in the Star Wars Droids cartoon.

Anyway, back to these games. The first one I will be looking at was given to me by my grandmother who got it from a carboot sale. I remember my cousin got one as well, and he got to choose which one he wanted. It’s funny how time plays tricks on your mind as I was sure his one was a driving one with a party van that had to avoid fire and stuff, but this doesn’t seem to exist. Anyway, this one is Michaelangelo’s Tunnel Trap, which I  remember quite well just because it was so difficult to me as a kid.

As with all of the games, you obviously have to wind it up first. You then control Mikey as he tries to  reach the pizza at the end of the sewer. Bebop and Rocksteady move up and down trying to ‘crush’ him as he moves. There is a little score dial that automatically updates every time you manage to get to the pizza, though you can’t see it as it in the picture as it’s being covered by my hand and I didn’t really think about that when I was taking a picture. The weird thing is that Mikey is on a hinge, so he kind of opens and closes when he moves, kind of like Pacman. I wondered if there was a Pacman version of this game, though I haven’t found one. There are more of the exact same game with different designs though, I found a ‘Knights Mission’ and ‘Cat Dodger’ games when looking for a Pacman one. Both of which play identical to this one, but are obviously lacking warthog and rhino hybrid men, which make this naturally superior.

Anyway, with a bit of patience and timing it isn’t too difficult a game, though as a kid I didn’t really understand timing so it was nigh impossible.

The second Pocket Arcade I owned as a kid was Raphael’s Sewer Battle. I don’t know when I picked this up as a kid. There is every chance this is the one my cousin owned and it ended up being given to me. It’s much  easier than the first one. All you really have to do is move Raphael backwards and forwards to catch the Foot soldiers whilst avoiding the falling trashcans. 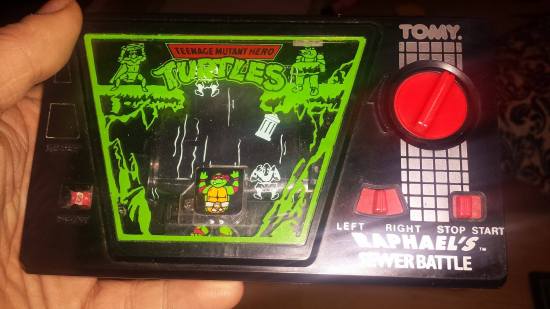 For every Foot soldier you ‘grab’, your point meter goes up by one. Only mine doesn’t move at all until I have grabbed about seven soldiers and then it reluctantly crawls to 1 point. I don’t know if getting hit by the trashcans is supposed to deplete your points at all in other Raphael sets that actually work. I think I’d like this game a whole lot more if it worked okay, but seeing as the main point of these is to get points, the fact the points dial doesn’t work on mine makes this game quite literally pointless.

The next one is Leonardo’s Pizza Vault. It is a strange game. I acknowledge that all of these games are a bit weird, but narratively this is the most incomprehensible. 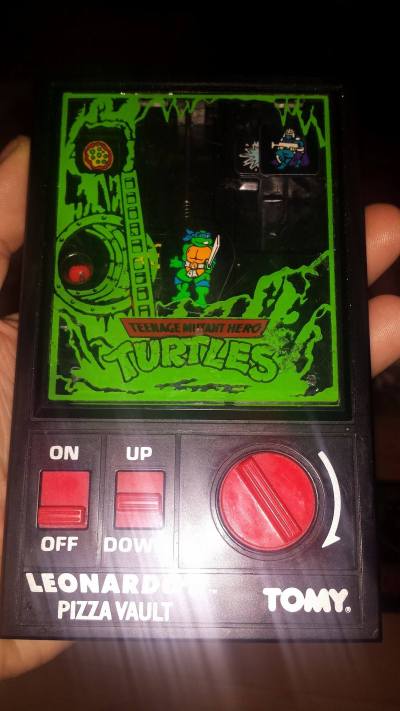 So the idea of this one is Leonardo has a key (that sticks out of his right side) that can open a vault at the top of the ladder which contains a pizza. For some odd reason, Shredder has decided he is against Leo enjoying his meal and is hiding in the sewers with a gun. He moves and shoots every few seconds so you have to mind your timing to move up the ladder quickly and unlock the vault to get your pizza out, giving you a point. If you get hit with Shredders gun it makes you tilt sideways and you have to come back down to reset so you can try again. It is a fairly fun game though can be a little tricky like the Mikey one. I just don’t get why they have locked a Pizza in a vault, in the sewer, and with Shredder being the leader of a criminal organization, surely he would just send one of his lackeys down to the sewer to stop the turtles getting their dinner, instead of him doing it himself. Still it’s nice to see that some jobs aren’t beneath him, kinda like when he decided to pour mutagen into the sewers himself to kill Yoshi (Splinter). More people in positions of power should show that they aren’t beyond doing the more menial tasks and are willing to get their hands dirty.

The final game is without a doubt my favourite. It’s Donatello’s Sewer Seltzer Cannon!

Despite the fact that this is very grimy and looks very much like it could have come from an actual sewer, this one is my favourite of the bunch and seems the most technically impressive to me. It also feels quite akin to the old arcade shooters like Space Invaders and Galaga. The enemies at the top are stationary and you have to shoot them with a jet of water from the cannon, though you have to be very precise for it to register a hit. The jet of water is on a rotating belt and it takes a little while to come back around if you miss. It’s probably easier to show how it works in a video than to try and explain.

I actually made that look fairly easy but sometimes the timer runs down and there are still two enemies remaining. It would probably have been more interesting if the enemies moved or something to make it a little more challenging, but you have to be so precise that a small amount of skill has to be present anyway.

Considering that these  were competing with the  likes of the Gameboy, I don’t think these were bad little games. I didn’t get a Gameboy until I think Christmas ’98, but had this little toy for a couple of years before then, and I did take it with me places from time to time. I think that if you gave one of these to a kid these days they would probably look at you disdainfully and then request that you give them their real gift. Being more familiar nowadays with actual arcade machines, I can see what they were trying to do with these, going down the route of challenging but simple and fun points based gameplay, which I think is generally lacking in gaming these days.

If you want to pick up any of these games yourself, the Pocket Arcade games are generally quite plentiful on ebay, but you might have to have to wait a while trying to locate all four Ninja Turtles games. It took me about six months to find all four and even then the games I did find aren’t in the best of conditions, being dirty and cracked, so some patience is definitely needed when searching. On the plus side, even though these games are scarce, there isn’t a huge demand for them so they can be picked up fairly cheaply, which is always something I always appreciate when I’m spending my money on old crap.

Pocket Arcade toys and other handheld games might make another appearance on here if I can pick up some more at a good price!