You know it’s getting that time of year when you’re in the supermarket and go down the aisle for bread and cakes and discover it has adopted a strange fluorescent orange tint.  In actuality, there wasn’t that much Halloween stuff in the whole store. There was far more Christmas stuff than Halloween but the bakery part had a pretty neat selection and I think we purchased everything that looked half decent and  spooky.

Out of all the sugary shit  purchased, the things that looked the most interesting to me  were the ‘gooballs’. They look a bit like ‘snowballs’ or ‘jammie joeys’ or one of the other millions of brands of chocolate coconut ball things on the shelves in stores in the UK, just with a Halloweeny orange colour. 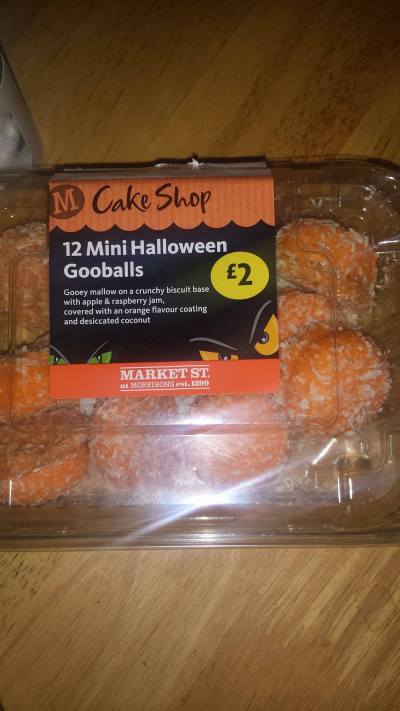 They also look like an Oompa Loompa’s balls, but they are assuredly not. They really aren’t great though. They don’t seem to know what they are doing taste-wise. There is too much shit going on. The package says “Gooey mallow on a crunchy biscuit base with apple & raspberry jam, covered with an orange flavour coating and dissected coconut.” Instantly it tastes of white chocolate, and coconut, then marshmallow, jam, orange and and biscuit. There is so much going on it’s kind of too much. They aren’t awful and I almost certainly be consuming worse stuff in the future. But I wouldn’t rush to munch ’em again.

The mummies came with six in a pack but they didn’t managed to make it home (before I could take a photo) without a casualty as my girlfriend really  likes gingerbread.

These were actually pretty good, though were crunchy to the point of almost hurting my teeth when I bit into one. Although they don’t look as mummy-like  as I would have wanted. Each gingerbread man looks more like someone who has never  used toilet tissue before and instead have had to  use sandpaper all of their life, until this moment where they have just been handed a toilet roll and were so overcome with emotion they threw it all over themselves and shrieked with happiness.

The icing has the generic sweet taste and was really crunchy as well. I quite liked these overall and were much better than gooballs.

These were  good too, and a little chewier than the gingerbread men. Gingerbread is one of those things that I rarely eat, just because there  are far more exciting things usually available at any place that you could get or be offered gingerbread. Even at home (and I do not bake) I would rather make a huge massive sickly chocolate cake than gingerbread. But the few occasions I  actually eat gingerbread I do enjoy it.

It was also nice to be eating an insect looking thing that wasn’t actually an insect. The icing was really crunchy like the gingerbread men which I realised I wasn’t a massive fan of. I like icing when it is soft and feels like it has been put on whatever product fairly recently. There are some exceptions like party rings (a  sweet snack that is available here in the UK) but largely I don’t want crunchy icing. This could be attributed to my huge dislike of meringue though. I remember when I first bit into one as a kid, it was so overly sweet and powdery and crunchy that it cemented itself as one of the food items that I would take my dislike of to the grave, so I am not overly fond of stuff that has a similar texture and taste. But in all these were not awful.

These are exactly how you imagine really. Soft crunchy shortbread with marshmallow faces on them. They were pretty good, but I was starting to feel a little sick at this point from too much sugar which probably hindered my appreciation of them.    The marshmallow doesn’t have any flavour other than the usual flavour of marshmallow.

They could have had a better design in my opinion, as I take issue with the mouth/teeth of the pumpkin face. It looks like a blonde moustache that has some how fallen to just below the lip.  If they are teeth, then the pumpkin shouldn’t be smiling. You can’t smile and bare sharp yellowed teeth at the same time. Well you probably can, but it doesn’t look spooky or malicious which is what I want from my cakes and biscuits at this time of the year. 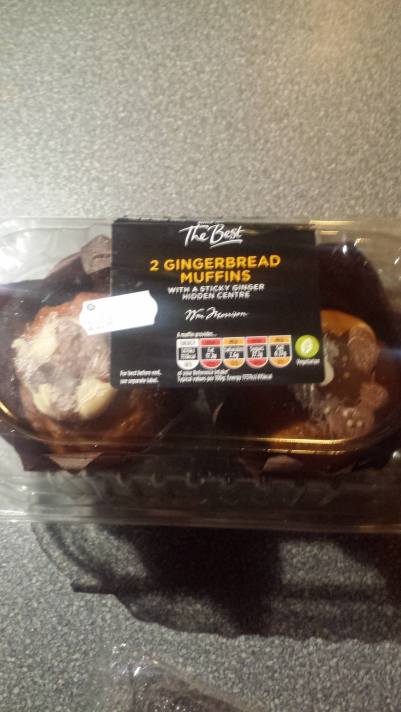 I unintentionally saved the best until last when trying all of this stuff. I also didn’t realise what a crap picture I had taken of this sticky, awesome thing until they had long since been demolished.

Though they don’t look particularly Halloweeny, I haven’t seen these around at any other time of the year. But then, (as I previously mentioned) I usually go for a cake or biscuit that seems more exciting to me like a double chocolate cookie or one with M&Ms in or something.

The muffin’are basically  a brownish colour, with a splodge on top which looked akin to the fondant in coffee cake. A little chocolate gingerbread man lay atop of the splodge.

Biting into it, and it obviously tasted like more gingerbread which I wasn’t overly enthusiastic about as it felt like I had already eaten my body weight gingerbread. Another bite and my tastebuds were instantly rewarded with a sticky toffee flavour sauce hidden with the cake. I couldn’t actually finish it because it was so rich. This was some seriously good but seriously sickly shit, and definitely something I will buy again.

So feeling suitably spooky and like I could easily throw up bits of spiders, pumpkins and mummies, my Halloween inauguration was concluded. Though the UK does not do Halloween anywhere near as well as our American counterparts,  some decent stuff can be found in the shops if you have a good look around. It’s just a shame stores seem to put all the Christmas stuff out before the Halloween stuff. Halloween is far less expensive, is a good enough reason to dress up and watch horror movies. What isn’t to like?

If you are feeling a little Halloweeny and want more spookiness I will be doing a  countdown this year starting from the 18th October for the thirteen days of Halloween, each day looking at stuff I like that is spooky and fun, varying from old video games, 80s and 90s toys, candy, etc. The usual stuff really. So like me on facebook, follow on twitter or just subscribe for updates! I will be doing some giveaways when I reach 100 likes on facebook!