Modern toys rarely manage to impress me so I don’t tend to buy them often, but sometimes some come across my path that are so cheap that I think ‘Meh!’ and I buy them anyway.

I have had some experience with Jakks Pacific World of Nintendo figures before, with a Legend of Zelda Skyward Sword Link figure which I reviewed here. If you have read it, you will see that I kinda lost my shit because he came with a ‘mystery accessory’ that turned out to be his shield, something that should be a staple of the character and not a bonus. A bonus would be something like a rupee or a boomerang or another weapon of some kind that is featured in the game. So when this arrived in the post, in my typical fashion of getting irate at things that don’t really matter, I got irate at things that don’t really matter.

I opened Link up and yup, sure enough his mystery accessory is a shield. Right away it was really noticeable how much bigger he was than the Skyward Sword Link, which I went and dug out to compare the two next to each other. I thought there was a degree of scale with these toys, but unless they have better nutrition in the Ocarina of Time version of Hyrule than the Skyward Sword Hyrule resulting in people growing taller in the former, it seems like there is no scale at all.

Despite my annoyance at his mystery item not really being a mystery, it is a really nice, pretty articulate figure. Do you want some interesting trivia? Well I don’t have any, but I can tell you that the Jakks Pacific toy company was started by the same fella (Jack Friedman) who also founded LJN, a company notorious for the amount of terrible games it produced back in the late ’80s and early ’90s , He was also responsible for THQ, another game company that made a few Gameboy games I played as a kid, as well as more recent titles  like Saints Row.

I wonder if I just like this toy more than the Skyward Sword Link because this version is more familiar to me. It is pretty biased of me if so, but I don’t think I really care.

The second World of Nintendo I am going to look at today is this similarly green character.

It’s Yoshi! Even though I hadn’t opened the packaging, and it isn’t very noticeable with my camera, he has a big scuff on his chest. Some people would be really annoyed about things like that, but I don’t let silly things like toys annoy me (haha). 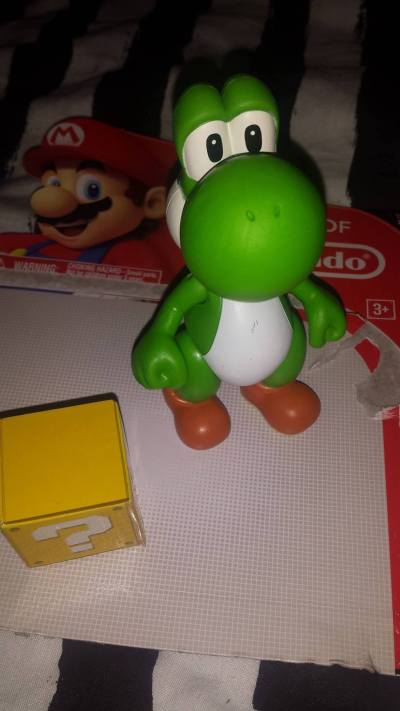 I really love how chunky Yoshi is. If I was a kid I would have probably have bitten this figure as it looks and feels like it would be a delight to chomp on. Like Link, he is very articulated and displays very nice. His mystery accessory comes in a little mystery block that looked like it had come straight from the games. I was actually genuinely interested in what was in the box, as unlike Link I don’t think of any obvious object that should accompany Yoshi.

It was a Yoshi egg! It was probably quite obvious thinking about it. in hindsight  It also feels chunky and smooth and perfect for biting. It probably a good thing that I am an adult and supposedly know better as I very well could have been rushed to accident and emergency with a Yoshi egg lodged in my throat. I think generally I was pretty good at not putting toys in my mouth (aside from a few monsters in my pocket) but this could have been a game changer.

The next World of Nintendo figure is Nintendo’s flagship mascot. 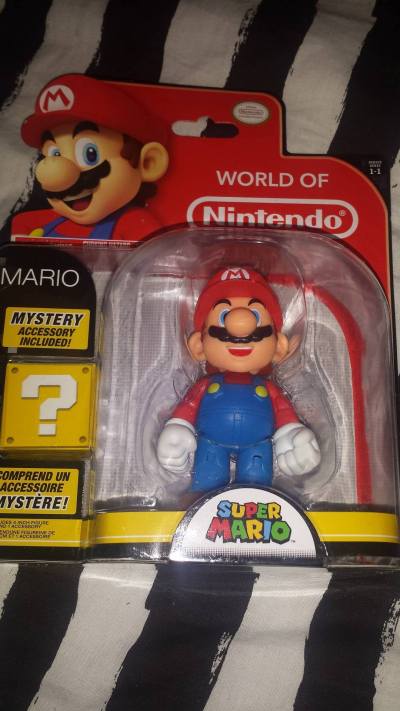 He probably doesn’t really need an introduction but in case you have been living under a rock, this is Jumpy Macnair, the Scottish electrician.  No, not really, it’s obviously Mario. 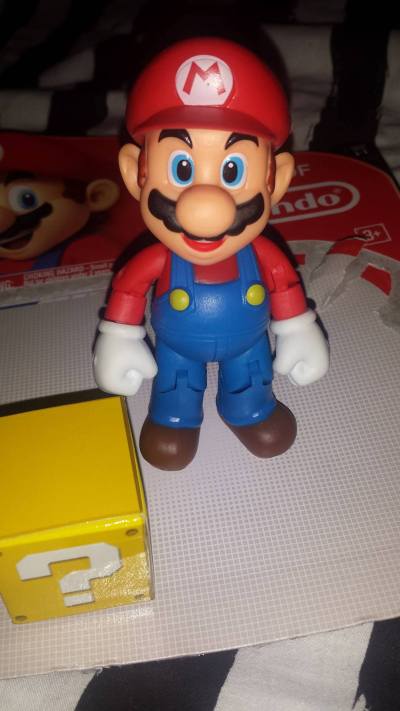 Like Yoshi, this figure feels solid. It feels like you could easily hammer in a nail with this fucker, but he is still really articulate and poses quite nicely. His mystery accessory is somewhat expected to be honest but they did a good job on it. Naturally it’s a mushroom.

So in all, these are three very nice figures. I don’t really buy many modern figures but could happily pick up a few more of these. The only thing I don’t like is how big and obvious the CE marking is on the arses of these figures. It is the standard for toys sold in the EU to have this marking somewhere, but I think it just looks too obvious. It could be a lot more discrete by not using big black bold writing. 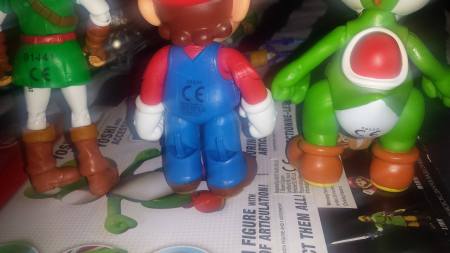 As I have let team Nintendo have the focus for this blog post, it would only be fair to let team Sega get a little bit of a look in.

I am assuming that this Sonic figure came out in 2011 judging by the fact the packaging states it is a 20th anniversary figure. I played Sonic a lot more than I did Mario as a kid so have more familiarity with the character. I also despise what they have done to Sonic over the years, visually and character-wise. The lanky, bandana wearing Sonic who has had a human girlfriend is not the Sonic I loved as a kid. I find it interesting that Mario has remained virtually unchanged the past thirty years and is still as popular as ever down to the fresh feeling of new games, but Sonic has had a few various incarnations that has lost many fans over the years. I think Sega are trying to turn the series back to the original style now as they have finaaaally realised that people just don’t care about Sonic like they used to. I cannot help but to feel that Sega should have just listened to the fans concerns and disdain for the direction  the franchise was heading about a decade ago. 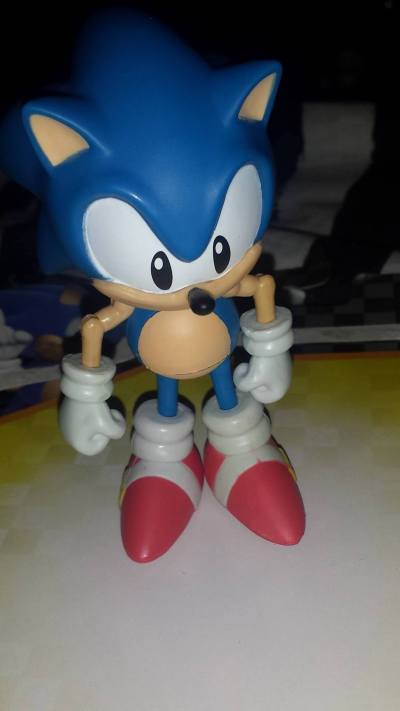 It is very fragile feeling. It took some attempts at aligning his torso so the flesh coloured part looked okay, and I was convinced that when I was trying to turn him I was accidentally going to snap off one of his little arms. I don’t know why they decided to give his arms articulation, but they are so thin they feel like they are going to break with any attempt at moving them. Still, it isn’t a bad figure. It doesn’t look or feel as nice as the World of Nintendo figures, but it is around the same scale as them and can sit on the shelf next to them and not look too out of place. I don’t think there has been a better version of classic Sonic since this one came out, at least not in this scale so until they release one this will do just fine.

On a final note, after looking at Sonic and Mario; why do so many video game and cartoon characters have white gloves? I think that the only time I have actually  seen someone in real life wearing white gloves is on snooker that my mother likes to watch. The referee type person who places the balls on the table always has white gloves on. I’ve worn a plaster (band-aid) on my finger before now and within twenty minutes it has become a horrible grey colour just from the dirt and grime of everyday life. I can’t imagine how filthy Sonic and Mario’s gloves would get with all of the running at breakneck speed around  grimy industrial levels and  the massacring of thousands of Goombas.

Hopefully my mentioning it will not ruin any immersive experience next time that you play a Mario or Sonic game.