After starting to plan for my Halloween countdown that I am doing this year, I got my Mighty Max toys out again. Every time I get ’em out, I realise that being a grown man, how far from being an adult I really I am. I sat for entirely too long playing with Mighty Max before I took some photos for this post.

My first post on here was a Mighty Max playset, and I meant to give the toyline more of an appearance on here than it so far has had.

There isn’t much to dislike about the MM toys. They were mostly all pocket sized playsets, each with a different theme, some were sci-fi, some were fantasy or horror, but all had a nemesis or two that Max the protagonist had to either evade or defeat.

The set I will be looking at today is Mighty Max escapes from Skull Dungeon, which I have been staring at for a couple of months as it in my header image, and thought I should probably give it the attention it deserves. 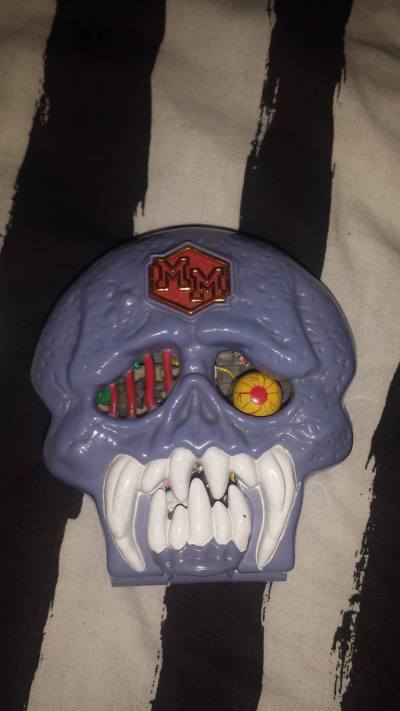 The outside of this playset takes the form of a very concerned Skull. It’s almost the face of someone who has just experienced a swift and savage kick to the bollocks. As he doesn’t have a body we can only assume that this is what has happened. 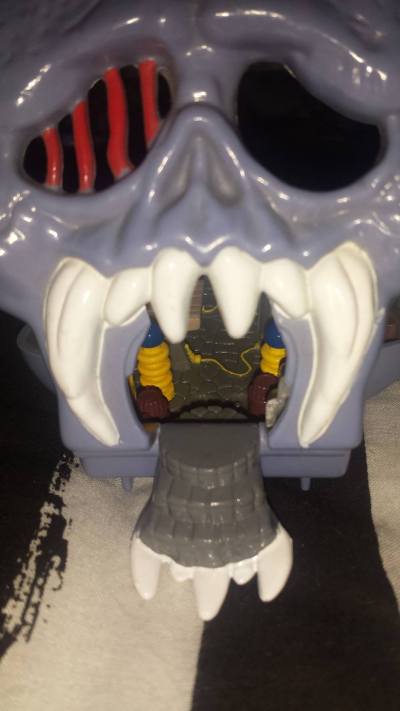 Opening it up and the mouth comes down like a kind of drawbridge. Not many of the playsets do this which I find surprising as it is a neat little feature.

Inside the skull is a scene that looks like it is yanked from a Universal Monsters or Hammer Horror movie. A hunchbacked mad scientist type character lurks near the door and his Frankenstein-like monster lies on a table. The thing that is the eyeball of the skull whentoy is open is now a Tesla coil, and there are a few other electrical looking gadgets in the mold around the place, along with wooden barrels and table. The sculptors at Bluebird toys really deserve a pat on the back for the level of detail they put into their playsets. I can’t speak for Polly Pocket sets, but the Mighty Max ones were so choc filled with teeny little details.

Another neat little feature is that there is a trapdoor in the floor, with a drawing of a ladder underneath it. Obviously they couldn’t put an actual drop underneath it, but it is a nice addition. There is also a movable lever which serves no real purpose other than what ever you decide it does. I decided that somewhere in the world it inconveniently turns up somebody’s toaster by a couple of clicks.

The top part of the playset has a bookshelf that naturally is a door, with a chained up skeleton in the room beyond. More little detail that made the toys as awesome as they were.

The figures weren’t overly detailed but good enough. I do like the mad scientist/Igor type character. He looks like if Sloth from Goonies got into the healthcare trade. The Max in this set is a green capped Max and is wielding a slingshot. The Max figures were always packaged randomly with every playset and didn’t vary a great deal, some had different colour hats and had different items in their hands. The later sets had a more teenage looking Max but as this is an early set he still looks like a young ‘un.

I think that wraps up this look at this Mighty Max playset anyway. I have a huge appreciation for spooky shit, little playsets and figures that are so small they are almost an invitation to be swallowed, so Mighty Max will appear again probably next month for my Halloween countdown!

One thought on “Mighty Max Escapes from Skull Dungeon playset!”