It is a somewhat perverse tradition in the UK that every couple of years Walkers crisps release weird flavours of crisps. A couple are usually alright, some are okay and the rest are usually foul. A few years back there were flavours like beans on toast, and egg and bacon. This year they are going for a  British sandwhich theme, so without further ado, let’s see what they are like.

After sticking my nose in the bag I can say that it does smell remarkably like a sandwich with salad cream in it. Straight away after placing a crisp in my mouth, you can taste the salad cream and cucumber, but for some reason it is well and truly  disgusting. I do actually like salad cream in a sandwich but this is just awful. After a few seconds in the mouth it kind of just has a beetroot-y  taste. Not a fan. I give these a 1/5. Hopefully this isn’t a sign of things to come.

Unlike the other two, these don’t smell much like the actual food item. But I don’t think a ham sandwich really has a scent. Taste-wise, it is quite similar to smokey bacon flavour crisps but very mustardy. I quite like mustard so these weren’t bad at all but my girlfriend made several disgusted sounding noises when she put one in her mouth. I give these a 3/5.

I have tried to explain what brown sauce is to people from outside of the UK before, and it isn’t really an easy thing to do. It has a spicy kind of Worcestershire sauce taste and has the consistency of ketchup. It is a common sight at the breakfast table served with stuff like bacon and sausages. I work in food, and have let a few Americans try brown sauce before and some really like it and some hate it and reach for the BBQ sauce instead. This smells exactly like a sausages with brown sauce, but the taste of the sausage is kind of lost amidst the tang of the brown sauce. It’s not a bad taste but it isn’t the best. It’s kind of just ‘meh’.  3/5 for these.

These smell like roast chicken but taste awful. I don’t think they’re as bad as the salad cream ones, but they’re really not great. Like the salad cream one, I do enjoy the actual food item of this. It does taste like chicken but the mayonnaise ruins it, and it kind of makes me think it’s what a chicken sandwich with mayo would taste like after being left outside on a warm day for a few hours. Not a fan. 1/5. 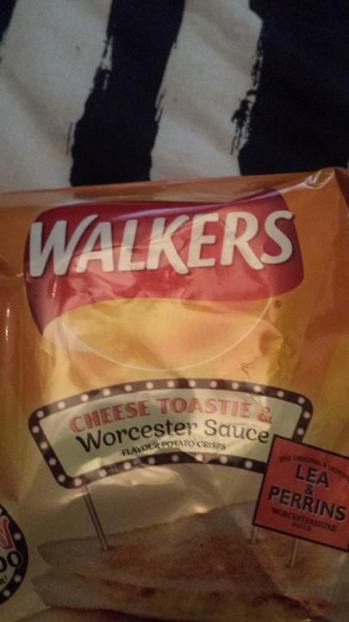 The final packet in this lot, and definitely the best of the bunch. They smell like Worcester Sauce and taste exactly like a cheese toastie with a dribble of Worcester sauce. I don’t know if this is a food item that exists outside of the UK, but it damn well should do. There is little more enjoyable food-wise than this, if you are lazy or drunk and want something quick and easy. These get a 4/5 for an accurate and tasty portrayal of the real thing. Though the real thing is far better for sure.

So that’s the end of my look at the Walkers promotional sandwich line. I have been informed by my friend in Illinois that the American version of Walkers (which I think is Lay’s) does something similar every year where you have to vote which flavour you like best.

These aren’t the weirdest food items I have tried this year, but they aren’t exactly normal. But they are definitely worth a try if you get the chance. Apart from the Salad cream one. I really recommend you stay the hell away from that shit. Bleugh!