It’s October, the month of Halloween, and that means an obligatory Mighty Max post!

So I recently wrote an article on Mighty Max for an upcoming toy edition of Fusion Magazine, and whilst I was writing it I decided to have a look at how much Mighty Max toys were going on eBay lately. And I was pleasantly surprised to see that they were pretty cheap, at least if bidding on an auction. I managed to get a set I didn’t own for about £7 posted.

Introducing the very King Kong inspired playset- Kingdom of Gargantua! (Or Mighty Max tangles with the Ape King as it was known in North America).

The outer case resembles a Gorilla with his lip curled. It’s not as gruesome or creepy as a lot of the other MM playsets. I’d have much preferred a snarling version of the Ape King. But it’ll do.

Opening up the case reveals a green landscape dotted with interesting threats- a cooking pot for you to boil Max to death in, a giant snake for you poison or asphyxiate Max to death with, and a giant Ape for you to batter and crush Max to death with. Standard Mighty Max stuff really! Oh, there’s also two blood-smeared skulls, which become the Gorilla case’s eyes when the set is closed. 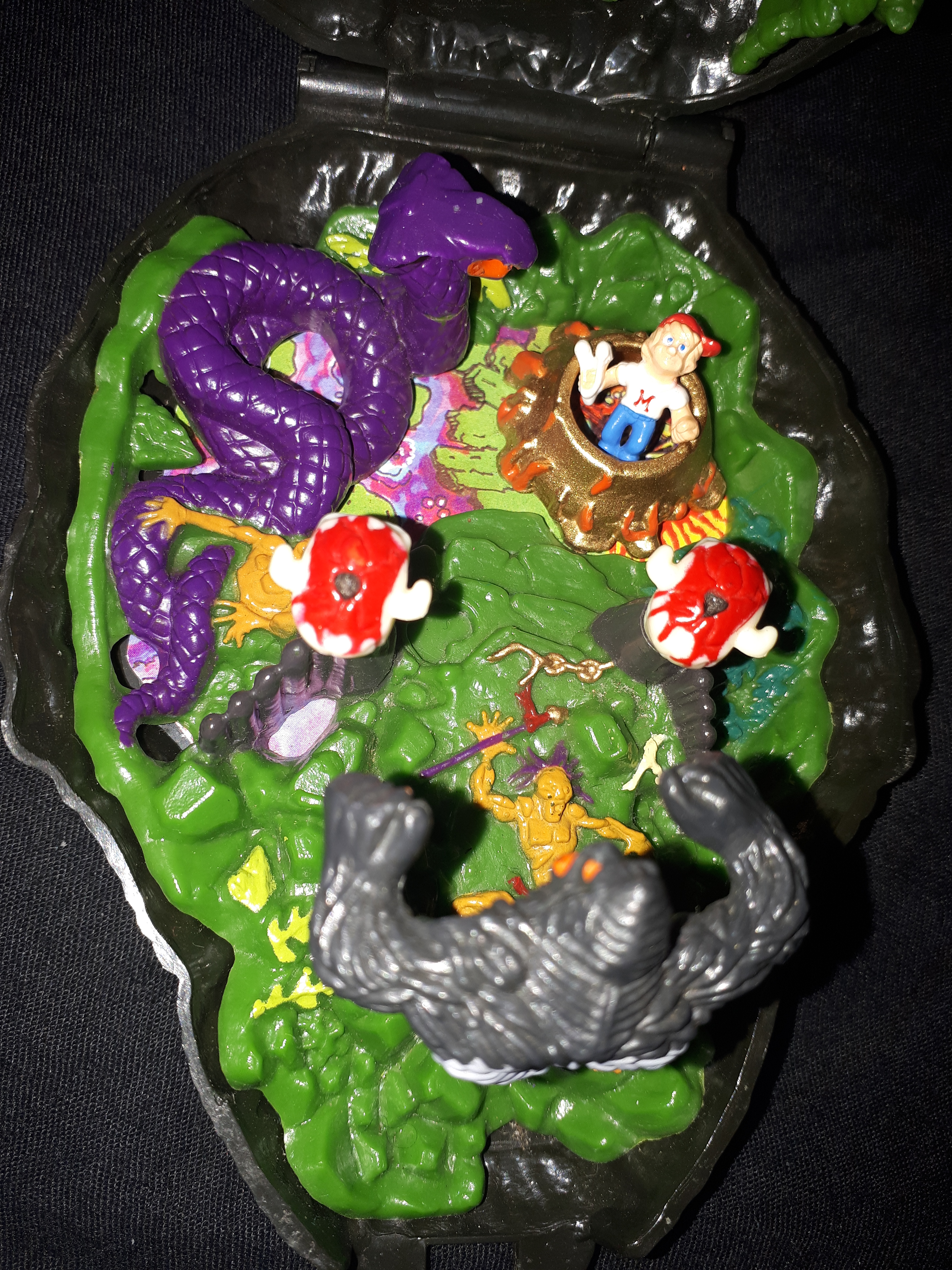 The giant ape (Ape King!) has a white back which becomes the dot of grey on the Gorillas forehead when the set is closed. I’m not totally sure I dig it, as usually silverback gorillas have a silver back, arse and legs. But this dude just has a teeny bit on his back. I’m also less than impressed with his face details, as he doesn’t look much like a gorilla and could be like a mud-man or something. It just doesn’t look totally apelike. Moaning aside, I do love his size and he really has the King Kong feel with his a massive bulk, and the fact that the ‘slots’ to fit him onto playset are atop a tribal looking corpse that is sculpted into the playset is rad. If I had to die prematurely, going out by way of a giant ape stomping on my bollocks is certainly not the way I’d choose it.

The top part of the set reveals another threat. Nestled behind a fold out section lurks a cannibalistic witch-doctor, brandishing the severed arm of some unfortunate soul. I honestly lived for this casual gore as a small child. 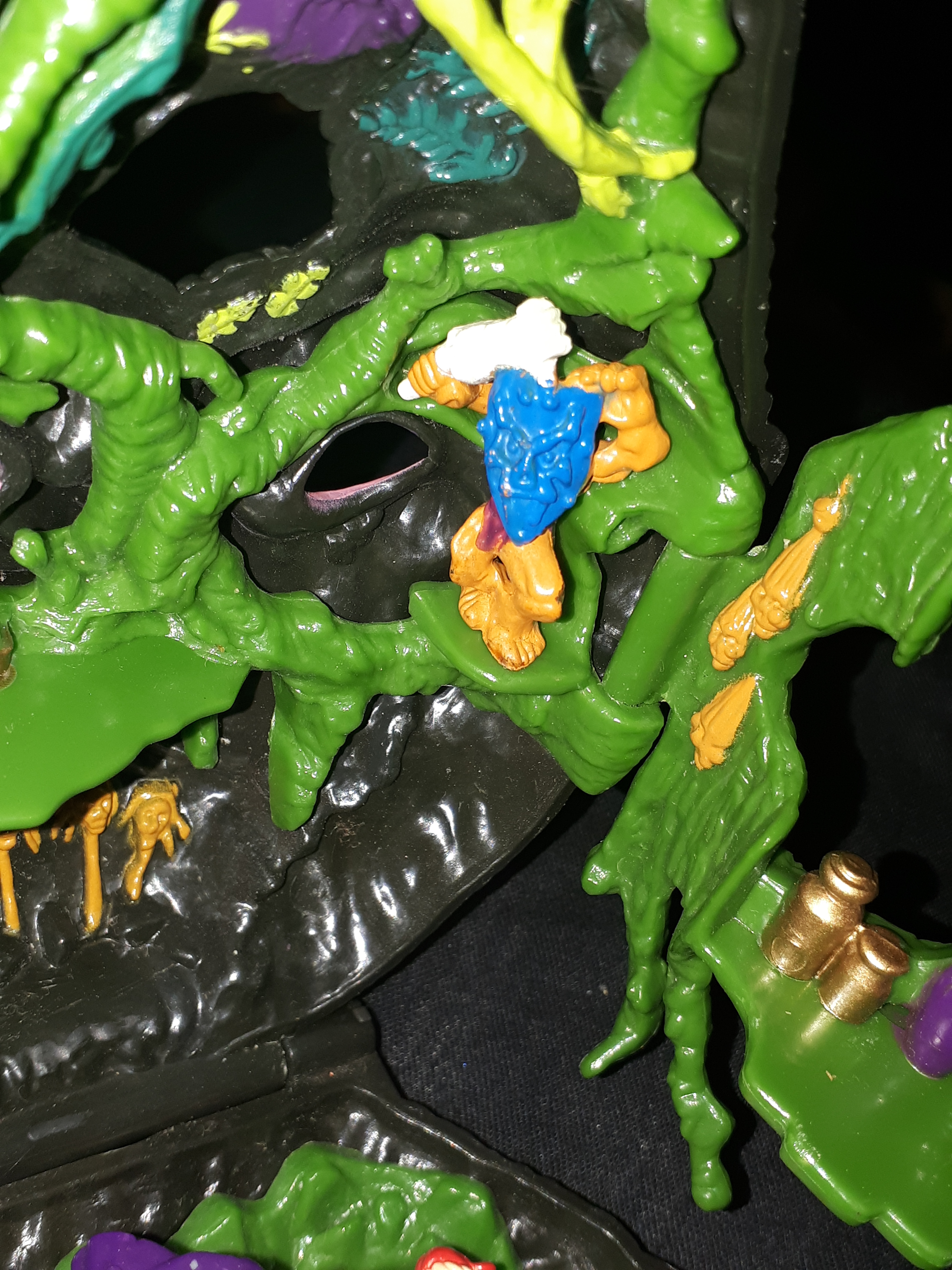 To further tie-in with the whole severed limbs theme, there are also heads skewered on spikes on the top half of the set, along with what looks to be some poor caged people just above.

So there we go, that’s the Mighty Max Ape King playset. It’s not my absolute fav MM set, but it’s a fine one, especially if like me, you love the 1933 King Kong movie. There are enough gory little things to make it creepy and suitably Mighty Max, even if the setting isn’t that of a more traditional MM setting, like a dungeon or whatever.

The inclusion of two villains, a cannibal witchdoctor AND a giant ape makes for some neat play scenarios. I just wish that the giant purple snake had also been removable, but it’s unfortunately not. Anyway, for the £7 that I paid for this item posted, I was pretty chuffed. I can’t remember if I owned this set as a kid or not. It’s extremely familiar, and it’s from one of the later series which most of my MM toys were from, but I’m not sure. I am certain I had the gorilla figure kicking about for a while, so I probably did, but I’m not sure.

More spooky posts tomorrow! Or Monday! Or whenever I get around to delving into my spooky toybox again! It should be soon though as it’s halfway through October and I’ve done shit-all spooky content so far.