It’s  been an age since my last odd food post, but after receiving a parcel from my Auntie labeled ‘blog fodder’, a comeback was well overdue.

The parcel contained two things, this being the first: 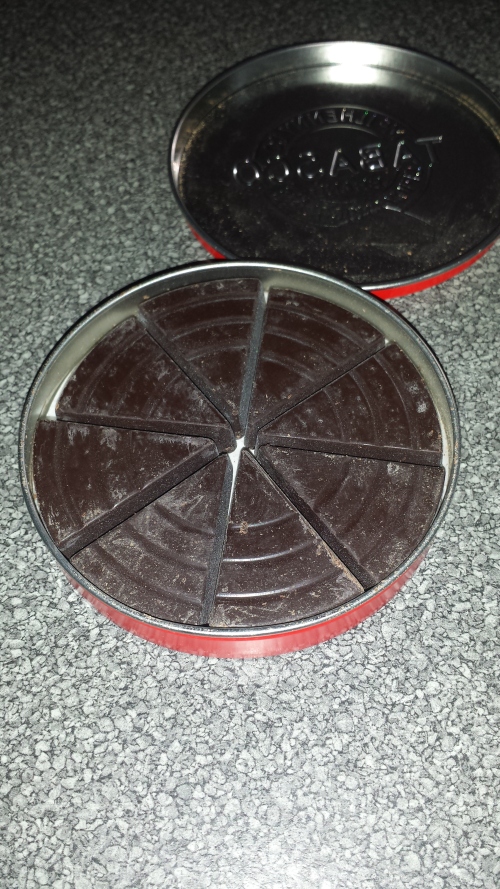 The chocolate looks fairly inoffensive, though it’s not really common to find chocolate that comes in slices like a pizza.

Just chocolate really, until you swallow it. Then then a creeping warm sensation begins in your throat, and you start to think “Oh shit, hear comes the heat!” and it ends as soon as it begins, a little similar to chocolate with liqueur inside.

Overall not bad experience. It definitely isn’t better than Cadbury’s or Galaxy but for something that could very well have been revolting, it’s alright.

Now for the second item in the parcel of which I was verrrrry dubious of: 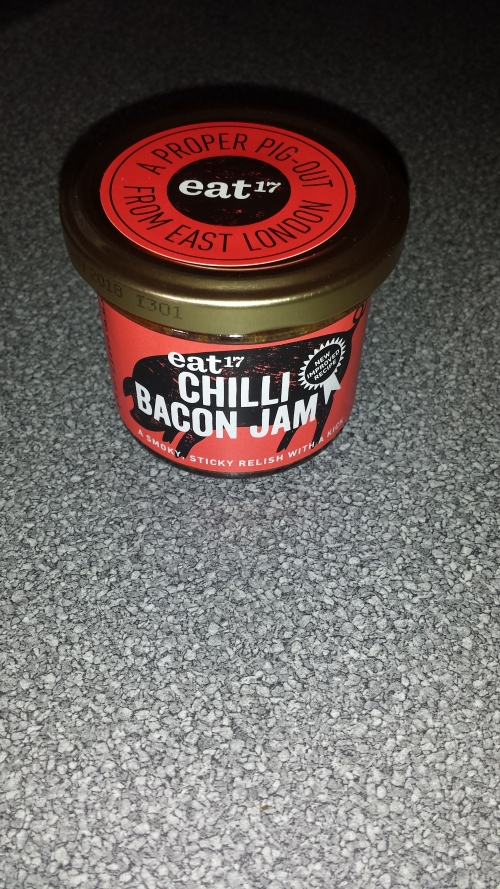 Chilli Bacon Jam! To readers unfamiliar with the term ‘jam’, here in the UK it’s what we refer to our fruit preserves as, usually made of strawberries, blackcurrants or raspberries, so to see the word ‘jam’ alongside ‘chilli’ and ‘bacon’ automatically made me suspicious.

The packaging seems unsure as to what it is as well, as on the back it says “Is it a jam, a spread or a relish? When it tastes this good, who cares? Jam it on some crusty bread or cheese. Spread it on your sarnie or relish it in a burger. It’s proper tasty hot or cold.”

I wasn’t too enthralled with the sound of the ingredients either. In the UK, we aren’t big on putting sweet condiments on our savoury dishes. America seems to really like it with it’s vast array of BBQ sauces and stuff, but over here we might put a bit of apple sauce on our pork or cranberry on our turkey, but that’s only if we are feeling crazy. So some of  the following ingredients seem weird when this is meant to accompany something savoury- cooked onions, virgin oive oil, cooked bacon, salt, smoke flavouring, antioxidants and preservatives, apple juice, sugar, dark muscovado sugar, balsamic vinegar, lemon juice, sunflower oil, chilli powder, bourbon, maple syrup, salt, garlic, treacle, black pepper, red chilli, rosemary, thyme, coffee.

After opening the lid my eyes weren’t met with the sight of anything that looked too spectacular either.

A jar full of brown mush that resembled cat food. The smell of it wasn’t terrible mind, kinda smokey, a tad like Branston pickle with a bit of BBQ sauce thrown in.

I was still a little hesitant as I smeared a bit on a piece of bread and cautiously took a bite. The initial taste was that of the chilli, a mildly spicy, sweet taste that was not at all unpleasant followed by a more subtle underlying smokey taste of the bacon, and a definite BBQ aftertaste.

For something that sounded as weird as ‘Chilli Bacon Jam’, it was pretty spectacular. So good that later on I had it on a cheese and ham toasted sandwich, which was awesome. I think if it was called a chutney instead of a jam, it would do it so much more justice. Anyone who braves it past the off-putting name is in for a sure treat.

Living in Scotland, I don’t know if I’ll be able to find it again anytime soon. A brief search online showed that they do sell this in Waitrose, a supermarket I don’t really visit as it’s a little too expensive for my tastes and I don’t think I’ve seen a single Waitrose since I’ve moved to Scotland. So I’ll enjoy my jar of Chilli Bacon Jam whilst I have it, and I’ll definitely keep an eye out for a Waitrose in future so I can stock up.

So I think that wraps up this post, and I’m pleased that neither of the odd foods that I tried today were unpleasant. I’ll try and do some more before too long as trying new food is always fun.