Well that title was a mouthful, but then again I think most of my titles are.

You can buy video game licensed toys and collectibles pretty easily today but once upon a time they didn’t really exist, and if they did they were very hard to find. Back in the mid ’90s I discovered and fell in love with the awesome Street Fighter II game in a little arcade called Surfside Amusements in Pensarn, Wales (which I am pleased to see still exists today).

Me and my dad would spend ages fighting each other on Street Fighter II whilst my mum wandered around playing on the penny falls machines. If I could zoom back in time to being a kid for just a while, I would pick an hour at that arcade.

I didn’t own a Super Nintendo or a Sega Megadrive back then so the only time I could play Street Fighter II was at that arcade when we were on holiday. But about 300 yards from that arcade in a Kwik Save supermarket, my parents bought me a present that would allow me to experience Street Fighter II (in some form at least) after we had gone back home to Shropshire. The Dragon Fortress!

To a six year old kid, this looked like the most awesome thing in the world. On the box artwork Ryu was kicking a target with M. Bison on it, Ken was being pushed off a platform by Vega and Zangief was readying a missile turret. All weird shit that couldn’t really be further away from the arcade game, but it was still epic just because it was Street Fighter II characters.

Unfortunately the playset didn’t come with Vega and Zangief, just Ryu and Ken. They didn’t look like how they appear in the original arcade game wearing just their simple Karate gi outfits, and the colours weren’t even correct. 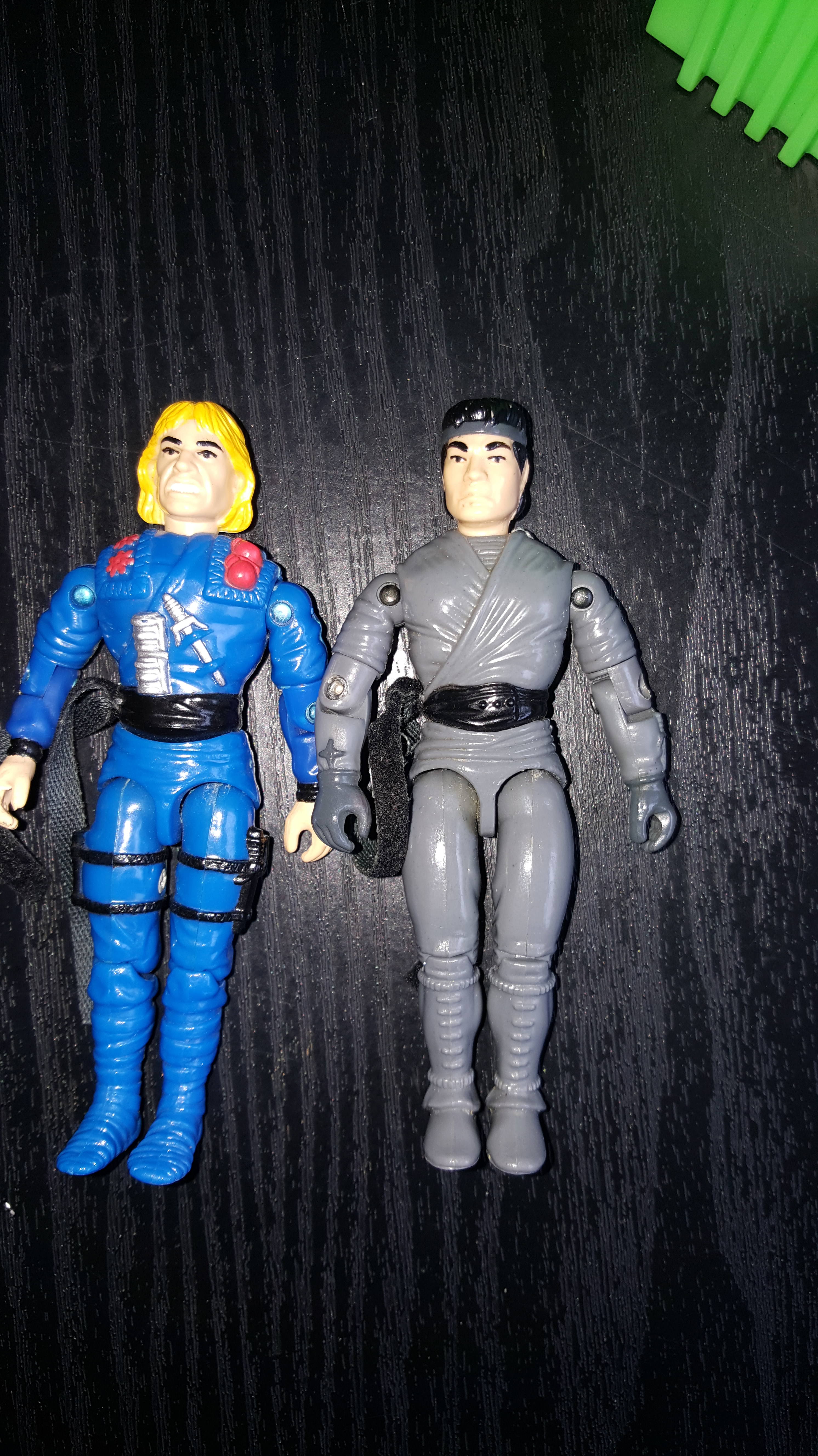 Ryu probably looks the most like his in-game appearance but he’s still wearing boots of some kind and his outfit is grey instead of white. Ken looks like he’s dressed for some spec-ops ninja mission and has grenades, shuriken, and a dagger tucked into his outfit.

I didn’t know it at the time, but the reason that these figures looked a little strange was because they were using the moulds of two figures from a previous G.I. Joe line, Slice and Storm Shadow. I didn’t really know anything about G.I. Joe back then as it wasn’t hugely popular in the UK like it was in the US, as Action Force was the main military themed action figure toyline in the UK (until Action Force merged with G.I. Joe in 1989).

If the colours of the figure costumes were bad, the playset was also a weird. As a kid, I didn’t mind the blue and green colour that the set is comprised of, but as an adult I can’t help but think that it looks a bit shit.

Anyway, before I take a proper look at the set I should tell you what it says on the back of the box:

So the Dragon Fortress is actually a training center for a martial arts tournament. Okay, that’s fair enough. So why is there a fucking missile launcher on the top of it?! I gather that a street fighting tournament would probably be on the dubious side of legality, but what tournament would a missile turret be an acceptable weapon to use?

Absurdity aside, it’s a pretty neat feature, one that obviously comes from a pre-existing G.I. Joe toy. In fact, the whole playset uses the same mould as another G.I. Joe product- the Toxo-Lab. Toy companies often re-used existing moulds for various toys just for cost saving measures. It’s quite clever really, but a few of the other Street Fighter figures (which I will hopefully look at in future) suffer for it and end up looking ridiculous.

Another feature of the set is the spinning target. A lot of the figures have ‘action features’, which was almost standard among G.I. Joe toys. Some of them can ‘kick’ or ‘punch’, usually by rotating them at the waist or pulling their arms back. I think the idea of this target is you make the figures ‘attack’ it and it spins around. 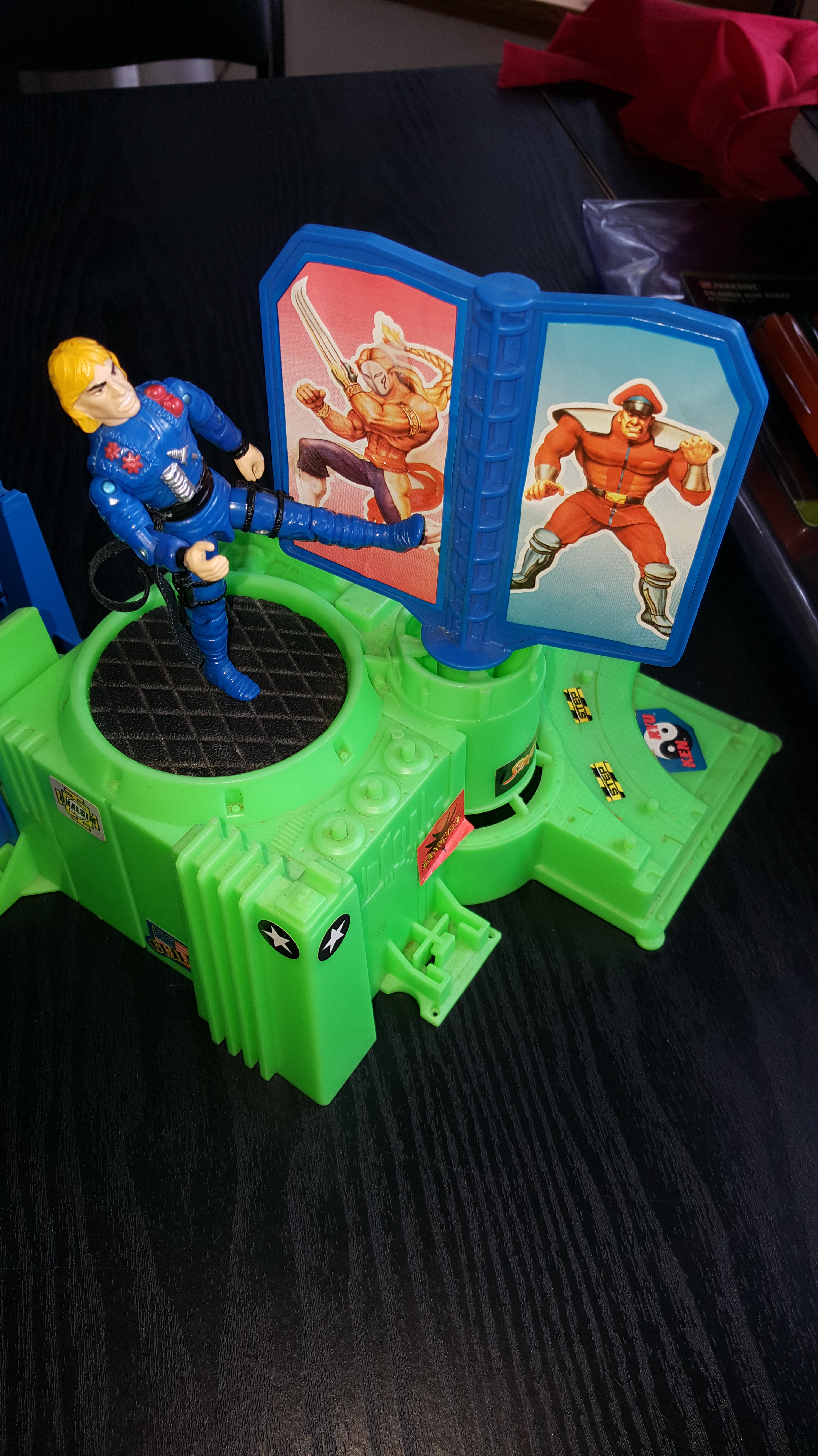 It’s a pretty simple feature, but I like the fact it has pictures of Street Fighters on it. On one side is Vega and M. Bison and the other is Balrog and Sagat.

Again, I am probably thinking too much into it, but the back of the box says the Dragon Fortress “is the main link for CAPCOM Street Fighters around the world so they never miss a shot at the action!”.

So any Street Fighter can go and train there? What if Balrog the boxer decided to walk in the gym to train one day? Would he mind them having a target of him up for everyone to punch and kick? He would probably laugh it off but he would be crushed inside. It might even remind him that the only reason he became a boxer in the first place was because he felt ostracised at school because everyone was so mean to him. Poor Balrog.

The other two features of the set are a bit weird. This is a trampoline which might be set up just in case people fall through the hole in the platform above. I never really understood the point of it. It’s held up with some elastic so it obviously springs back if pushed down, but aside that I don’t see its purpose.

You can’t really stand any figures on it as it’s sloped and they struggle to balance. Perhaps if they had put some little pegs on the grid part you could pull it down and catapult them into the air. As it is, it’s just a ‘meh’ kind of feature.

The final feature on this set is another really weird one.

It’s a bungee jump. Now I don’t know the most about outdoor sports and activities, but I’m pretty certain that bungee jumps are usually set up from places of a significant height, like a crane or a very high platform. The Dragon Fortress has opted to go for just one floor up, bringing about massive risk of cracking heads on the floor.

Seeing as the back of the box says that the fortress is to “train or strengthen and sharpen their skills”, perhaps it’s to toughen up Balrog’s skull so he can can headbutt freely during fights without any worry of injury.

As an adult, I can see that this toy isn’t that well thought out and was probably just a cash-in using parts from existing playsets. That said, (purely for nostalgic reasons) I love it. It’s a silly, fluorescent coloured little scene, and I had a whole load of fun posing all of my Street Fighter II G.I. Joes on it.

I probably paid too much for it, but honestly where else am I going to find a place where Guile can fire a missile turret at the same time as Vega can do bungee jumping? Probably no-where.