I don’t know if I had intentionally been putting it off quite, but after my relative bought me a scorpion lollipop, it was an inevitability that I was going to have to consume it at some point. This is the same relative that gifted me a garlic bread flavour stick of rock which you can read about here or the other lollipop containing ants that I tried here . 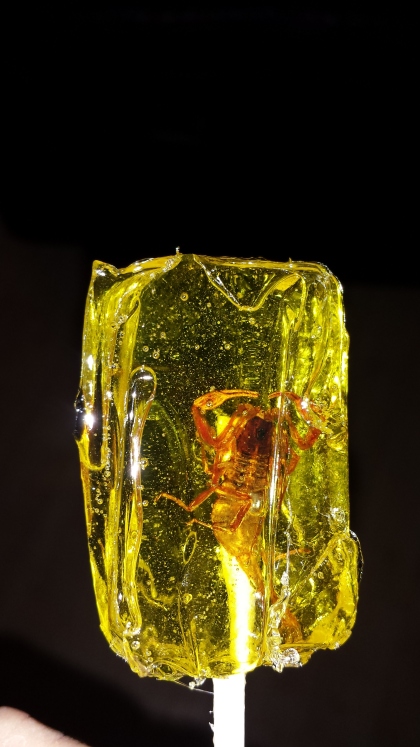 To be fair though, I don’t know if it is just because I live in a country where (to my knowledge) scorpions don’t live in the wild, but it just didn’t seem as daunting as the ant one. I could go outside and could find some ants within five minutes if I wanted, and because of them being just creepy-crawlies in my mind and not food, it was weirder in my head to eat them. This didn’t look hugely appetizing I admit, but I think because I wasn’t familiar enough with it as a bug and nothing more, it was a little easier. It could be just some sort of lobster that got very very lost.

Like the blueberry ant one, the actual  flavour of the lollipop part was a kind of manufactured, unnatural and overly sweet flavour but unlike the ant one which was blueberry, this was banana, very much  like the foam bananas we get here in the UK. It was really nice and very easy to forget what was inside the lollipop, until the claw started poking out through the side.

I don’t know if it was just my genuinely really liking the taste of the lollipop, but I sucked it to the point where it fell off the stick. I didn’t know quite what to do at that point, just crunch it up or to cautiously  keep licking it. Instead I went for a cautious bite. 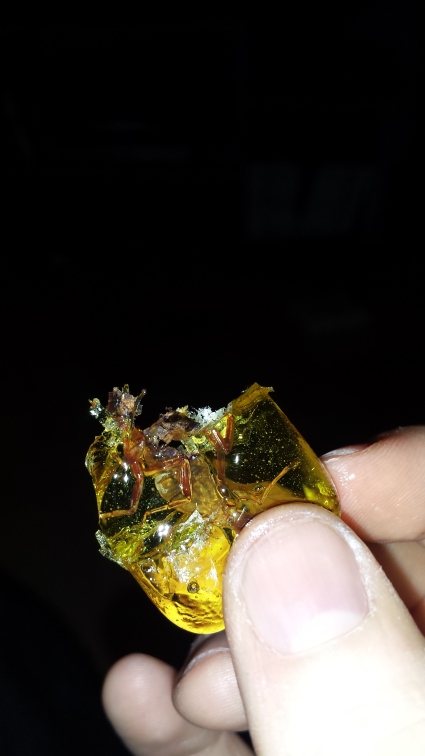 Straight away I could taste the difference between the candy and the scorpion. It was slightly smokey (as I think they are cooked before being encased in the sugar) but also had a mildly sweet and nutty taste. The outer carapace was very crunchy but after that it was really chewy. I wasn’t keen on that part as it was too easy to realise that I was eating an insect.

It wasn’t that bad though and I did finish it feeling like a badass, akin to my  characters in the Fallout games who have to regularly tuck into stuff like irradiated cockroaches and scorpions. I can’t say I would rush to eat another one, but I probably could if it ensured my survival in post-nuclear apocalyptic world.

A friend of mine got married in the USA recently, where she has family. She kindly sent me a few things that she brought back to try and suggested I might want to talk about them on here.

For the most part, I think Americans do a lot of good shit in the candy department. Everything is generally more sugary and decadent than our confectionery we have over here in the UK, though I do think our chocolate tastes nicer probably due to the amount of milk and cocoa beans that make the chocolate, where as Americans seem to rely on sugar more for the flavour. That said, I do like the USA’s Hershey’s chocolate. With stuff like Reece’s Pieces, Peanut Buttercups and Cookies ‘N’ Cream, I was of the firm opinion that anyone who says they dislike American chocolate was just being a dick.

Despite my love of American chocolate, when I saw the next offering, I did question as to whether perhaps I didn’t love it quite enough.

The normal Twizzlers are usually pretty good, kind of the same as our strawberry laces we get over here in terms of texture. But for some crazy reason, some genius at Hershey HQ decided that fruit flavour candy just wasn’t cutting it, and instead the world needed chocolate flavour candy. Why? Why is this a thing? Surely if someone wanted the taste of chocolate, they would go and eat a bloody chocolate bar?! Was there really a need to make candy taste like chocolate? I know with that frame of thinking, surely instead of eating a fruit flavour candy, I should just go and eat fruit. But some things work far better than others, fruit is something that just works whether it is in candy or drinks or ice-cream. Chocolate should always just stay chocolate (and ice-cream and milkshakes). 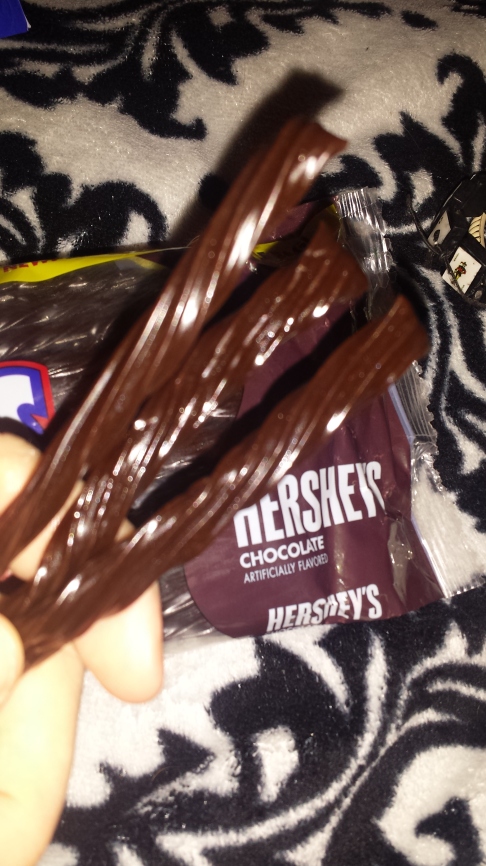 It tastes exactly as you would expect. It just feels wrong. When I was a kid many years ago, my parents thought it would be funny to tell me that sauce on top of the ice-cream that they had just prepared for me was chocolate sauce, when in actuality it was brown sauce (a savory tangy sauce here in the UK that tastes somewhat like a thicker more vinegary Worcestershire sauce.) For a few seconds it tasted like chocolate as that is what my brain expected it to taste like, but then it was replaced by the harsh taste of the brown sauce. Like that, I kind of tasted strawberry for a split second just because of all of the strawberry laces I had eaten as a kid, and how similar a texture it was. Then came the chocolate flavour. It just didn’t work. It tasted like chocolate but didn’t have the nice ‘meltyness’ that chocolate has. It just sat in my mouth until I chewed it (which is how eating generally works really). It wasn’t great. It probably wasn’t  as awful as I am making out but it just wasn’t satisfying like chocolate, and I really am confused who this was made for? I can’t see chocolate lovers liking it, as it isn’t chocolate, and candy lovers will want to eat stuff that tastes like familiar candy, not chocolate. I am all for innovation, but seriously Hershey’s, the walls separating candy and chocolate should never be breached. Don’t even try to ever again.

The final item I shall be looking at today is, unlike the last product, just amaaaazing. I have always had a vast appreciation for M&M’s. They are just a perfect blend of chocolate and candy. Oh shit. I have to write that after my previous paragraph whining about how candy and chocolate should always be separate. Obviously there are a few exceptions to the rule, and M&M’s are one of these exceptions.

We aren’t as lucky over in the UK to have the multitude of flavours that the USA has when it comes to M&M’s. We usually just have regular, peanut and ‘crunchy’, which I think just has some kind of cereal inside them to make them crunch. They are all good but none as good as some of the flavours America has.

Just look at this. 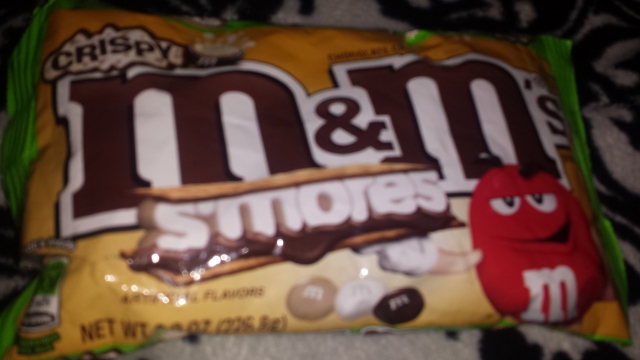 S’mores aren’t really a thing in the UK to my knowledge. But Wikipedia describes them in this way- “A s’more (sometimes spelled smore) is a traditional nighttime campfire treat popular in the United States and Canada, consisting of a fire-roasted marshmallow and a layer of chocolate sandwiched between two pieces of graham cracker.”

Doesn’t that shit sound awesome? Kind of like the chocolate biscuit we get here called Wagon Wheels. But warm and melting.

I think I tried real s’mores once, and they were good, but cannot remember exactly what they tasted like.  I cannot really judge how much like smores these M&M’s taste, but  I can however confirm that they taste sooo damn good.

There are three different colours, each one I am guessing representing either the graham cracker (digestive biscuit), chocolate and marshmallow. Though I cannot tell whether each one tastes different (as it is hard not to just shove a handful in mouth in one go) there is an overall sweet, chocolatey, biscuity kind of vanilla taste, which also taste a little bit toasted with a slight coffee flavour as well. It’s a happy little mix of sweetness.

I fear I may have become chemically addicted to them, and I feel nauseous at the moment from eating too many. I don’t think you can pay food a higher compliment than that really. I am surprised more food critics don’t say “This was so good that I ate so much of it I vomited”. But then I suppose that bad food can make you vomit as well.

But regardless, if you get a chance, you really should try these.

So what have we learned today? I would be an abysmal food critic and that nausea is no measure of how yummy something is, and that I am far happier eating candy coated  insects than I am with candy being made chocolate flavoured. And that is all.

If you like my post, please subscribe as I will be eating more weird stuff  in the future. If you didn’t, well that’s tough shit really. Thanks for reading!