My memory is pretty darn good regarding unimportant stuff from back when I was a kid. But I don’t remember if I saw the Mighty Morphin Power Rangers TV show before or after I owned these toys . I probably did watch the show first.  I  remember watching the show  with my cousin, but I remember playing with these toys a whole lot more.

Look at ’em. Even if you don’t know anything about Power Rangers or anything, these definitely look like interesting characters. With their many hued getup, they could be worst team of ninjas ever. But they are not, they’re Power Rangers! Before I talk about the figures, just for anyone who hasn’t seen the original show (though you probably have if you are reading this) the basic plot is this, Rita Repulsa (an evil space witch) escapes after 10,000 years of being imprisoned by a space wizard called Zordon, and with a small collection of underlings decides she wants to take over the Earth. In opposition to this, Zordon takes five teenagers (with attitude) and turns them into the Power Rangers, a team that uses martial arts, awesome weapons and giant robots (that join together to make an even bigger robot) to save the day every episode.

This sounds such an amazing concept, and it really was when I was a kid. As an adult however, I can appreciate it on a different level, really enjoying what a lot of nonsense it  is. The show actually  used footage from an older Japanese show (Super Sentei) for the majority of the action scenes, so all of the parts where they are fighting monsters, the rangers are actually being played by Japanese actors. Those scenes are pretty good, with exciting fight choreography and a lot of silly arm flailing fun. Then the other part is filmed with the rangers mostly out of costume, taking place around the high school they attend, and it feels kinda like it’s from a different world. It’s slapstick, there are two bullies who usually end up covered in cake or food of some type, and there is usually some school competition going on that they trying to  beat the rangers at. The problem with that in my opinion, is that if you are going to have an unbelievable world with monsters and villains, you need a realistic ‘mundane’ world to ground it in before all of the crazy stuff happens, so the audience is familiar and can relate to the characters and transition they have to go through.

But before I was a cynical asshole, I liked the fact the fat guy and his pal ended up with cake on their face every episode, as well as the monster fighting sequences and the ludicrous over acting of it all. I think my opinion just has been somewhat marred after finding out how David Yost (who played Billy the blue ranger) was the victim of horrific homophobic abuse whilst he was part of the show, and was told by producers and other staff that the idea of him playing a superhero was laughable due to him being gay. Seems like a big ‘fuck you’ to any of the kids who loved Power Rangers that grew up and realised that they were gay.

Anyways, back to a more blissfully unaware time. The toys!

So I was about four or five and we were on holiday, staying at a caravan site in Wales. One evening after spending time on the beach, we went to the supermarket Asda to get some stuff for dinner. I remember going down one aisle, getting to the end and seeing  the shelves (that were far taller than me)  just full of Power Ranger toys. At that age, it was awesome. I  wanted it all. Mum and Dad told me I was allowed one figure, so I chose the ‘Auto Morphin’ Zack, the black ranger. We went back to the caravan site and I must have gone through into my bedroom and was playing with my new figure when I was called through into the living room. There on the table sat the red, yellow and blue rangers waiting for me. I didn’t know you could get the green one at that point and they didn’t have the pink ranger in the shop. I was so damn happy with my new little collection. To this day I still don’t know how Mum and Dad did it, but on the day that we had to go back home off our holiday, I followed them into the house and there on the kitchen counter-top was Kimberly the pink ranger. I sound like a right spoilt little shit, but I don’t think I was. It was always holidays in Wales that I was given a few more treats than usual, and I can remember pretty much every single one of them.

So in order of how I recieved em, here they are!

Zack the black ranger comes with his power axe and pistol. For a 90’s action figure he is surprisingly articulated, more so than other action figures that came out after this line. None of these are my childhood toys from back then, as mine had a crazy amount of battles and I would be surprised if any of them had limbs still remaining. They are probably sat somewhere in a landfill sharing war stories with chewed He-man and a felt tip pen stained Chewbacca.

The most awesome part of the Auto Morphin figures though, was by pulling down on their belt buckles made their head flip inside their chest and another one pop out, only with the mask on. 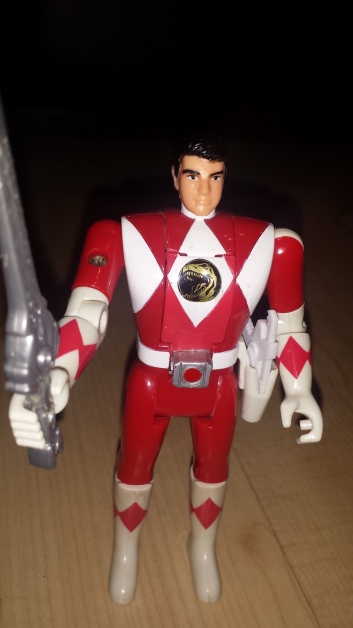 Jason the red ranger came with his power sword and pistol. I don’t know why they felt the need to put the word ‘power’ before everything. The sword never ever came across as particularly powerful. Whenever they fought any of the bad guys, this sword didn’t cause any decapitation or loss of limbs. It just made sparks fly out of them. 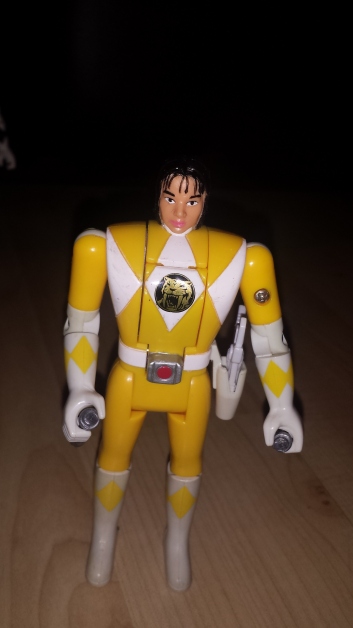 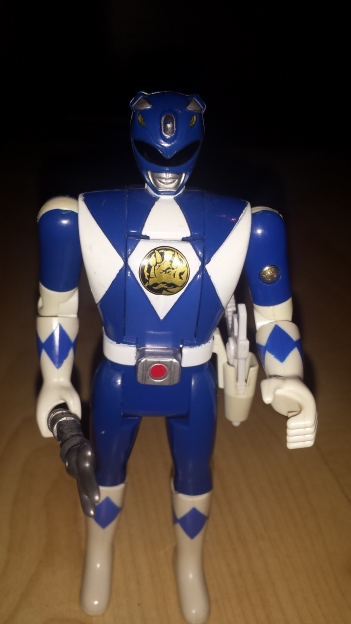 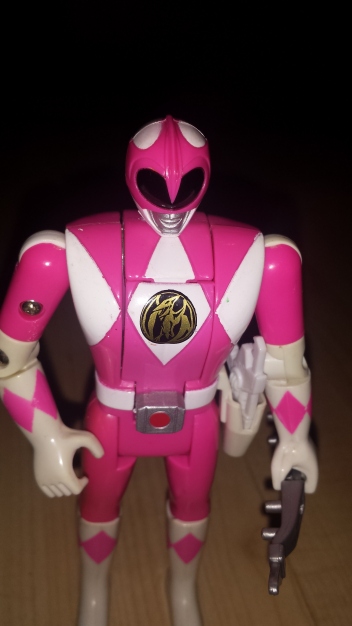 One of the flaws these figures have is they all have the same bodies, just different paint jobs to make them different, which seems odd for Trini and Kimberly to be as tall as their male counterparts. But I guess as the original yellow and pink rangers were played by Japanese men, I guess it does make sense that they would be the same size in the toys.

Also I don’t ever remember them having the logo of their power zord on their chest. I think the reason they did that was that originally they came with a stick-on tattoo. I remember proudly having Kimberly’s Pterodactyl logo on the back of my hand at one point.

The final ranger and one I didn’t own as a kid is Tommy the Green Ranger. Basically he started off as a bad Power Ranger, not that he did a crap job, he was one of Rita’s minions until he joined the other rangers. For this reason and the fact I didn’t own him as a kid, I don’t really trust him.

Along with his gun and sword/flute (what a combination that!) he comes with a golden chest shield, which looks good but comes in to halves and over the years must have worn away so it falls apart if you so much as  give it a harsh look.

One of the most awesome parts of these toys is that like in the TV show, all of their ‘power’ weapons that the characters come with can be combined to make one uber power weapon. This seriously impressed me as a kid and I am still pretty impressed today. 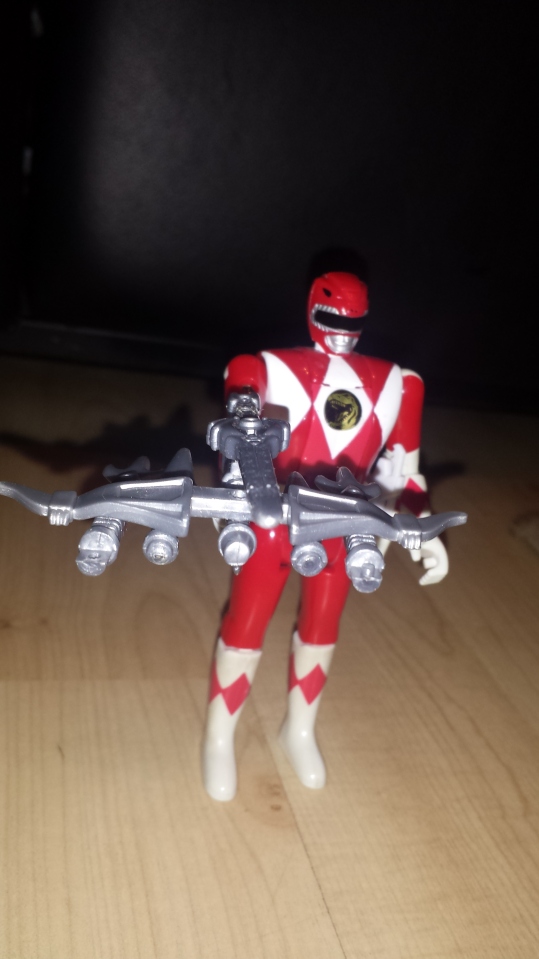 Might not look like much now, but this was impressive shit back in ’95. I don’t know how long I managed to keep all of the pieces and stuff though, as these figures were prior to my really trying not to lose accessories. For my 7th birthday I received a big version of this weapon which came apart to make all of the other weapons and it was  one of the best presents I got that year and possibly of all time. I am very much a strong advocator of  things that clip together to make other things.

Sooo yeah, that concludes my rambling about old toys that few people actually give a shit about today. I don’t think that the original Power Rangers TV show has stood the test of time when viewed today. But it is fun. To me it’s in the same place that the Star Wars prequels sit. It’s kinda awful but at the same time, you liked it when you were young, so a part of you still likes it a little bit. These toys have stood the test of time though, and I had as much fun setting them up and morphin them to take photos as I did playing with them all those years ago.