Gone are the days when men were men and engaged in street fights garbed in monochrome red or blue outfits and fabulous go-go boots. What time it was, the days when it wasn’t considered morally wrong to fight your brother to the death for the rights to  a woman that  you both wanted to bang. 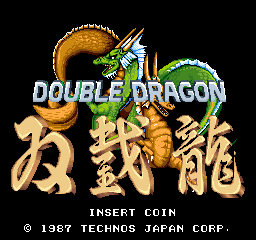 Of course I am referencing the 1987 beat ’em up video game by Technōs. It started as an arcade game but was ported to 278 billion other platforms at the time. I originally played the version for the Amstrad CPC as a child and loved it, even though the version I played was considered awful at the time due to the tremendous lag during gameplay. Regardless, it introduced me to the world of side scrolling beat ’em ups.

Arcade version. Billy and Jimmy Lee face off against one of the first levels tougher enemies.

The story is relatively simple. You can play alone or co-cooperatively with a friend as Billy and Jimmy Lee, two martial artist brothers who must battle through the various stages using fixts and a small arsenal of weapons to rescue Marion, (a woman  whom they both have feelings for) from the criminal gang known as the Black Warriors. After completing all of the stages and defeating the gang leader, you must then fight your brother for the right to be Marion’s man. That is the summary of the original arcade version at least.

NES version . Marion getting kidnapped. This becomes a regular occurrence in the series.

I didn’t ever get the chance to play the original arcade version until many years later when it was released on Xbox live marketplace. Growing up, I had my  horribly flawed version for the Amstrad, or I could go to a friends and play his one on the NES. Though the NES version  is the one I play the most today, due to technical limitations it failed somewhat in the sense that the title of the game was Double Dragon, as in ‘two of’. Double Dragon does not have a two player option for playing the main game, apart from taking it in turns.

Amstrad port. Nice bright colours. This would be a fantastic game if you have three years available to play through it runs  so slow it will probably take you that long to finish it.

In all fairness though, they did their best to make up for this by including a versus mini game, which is fun for about thirty seconds.

The main characters brother does still make an appearance in the main game, even though he isn’t playable. After defeating Willy (the supposed leader of the Black Warriors), the actual leader turns out to be your brother (who is just a pallet swap of the main character).  It was quite a novel and fun way of still making you fight your brother, and it seems a little less strange than two brothers fighting over a woman. The only other real downside of the NES game is due to technical limitations it’s impossible for two different enemy sprites to be on-screen together at the same time (apart from the opening where Marian gets kidnapped). So you do end up fighting an enemy and his identical twin at the same time a lot. 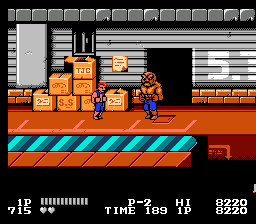 NES, Billy Lee about to face off against Abobo, who visually looks like the scientific  result of what happens when you load a potato full of steroids.

One thing a bit different about the NES version is they tried to introduce a kind of leveling system, where you could unlock different attack moves as you progress through the game. It was a nice idea I guess, but I am someone who likes to have all of the attacks at my disposal from the get go, so I can get used to them and learn how to use them effectively.

One thing I HAAAATED about the NES version is the patience destroying platform levels near the end of the game. If you haven’t played it, you are lucky that won’t have ever experienced that level of frustration. It’s up there with every underwater level in every game ever, (apart from Ocarina of Time).

The music of Double Dragon is fantastic. As basic as 8-bit music is, from the opening level you are hit with a melodic, almost swaggering rock tune that you cant help but wanna kick some ass to. There are undercurrents of techno on some of the later levels which are less warming and feel less familiar and anthemic, perhaps hinting that you’re more out of your comfort zone? I dunno, I could be just be overthinking it. Maybe I’m just more used to the first couple of  levels as  everyone who plays the game can usually get through the first couple of levels but the end of the game does take a fair bit of skill and patience, of which I  didn’t really have an abundance of in my childhood.

Billy Lee demonstrates how to combine a relaxing stroll in the woods with martial arts and baseball for the best results.

The version for the Gameboy is very similar to the NES version, just a little bit faster seeming  and a few different level designs. For the part, it’s a pretty nice portable version of DD, though  like the NES version can be very difficult towards the end of the game. (I am sure there will be readers of this rolling their eyes at how I can’t play video games and it is the easiest thing ever, and I suck etc etc. but I have never been able to beat the gameboy version, whereas I have the NES.)

Gameboy version. Pompadours have never looked so threatening in black and white.

The original Double Dragon for the NES can be acquired fairly cheaply second-hand, and I know the Gameboy and NES version is available on the Nintendo eShop for even less. In all, it is a fun game with the gritty NY backdrop obviously influenced by movies like The Warriors.

I don’t know if I intended this to be a review  or just a kind of acknowledgement of a great game.  If you have never played Double Dragon, or want to try some old-school beat ’em ups, you could do a lot worse than this game. I may take a look at some of the other games in the series at a later date, but right now I am off to kick a walking potato in the bollocks for his involvement in the kidnapping of my woman. 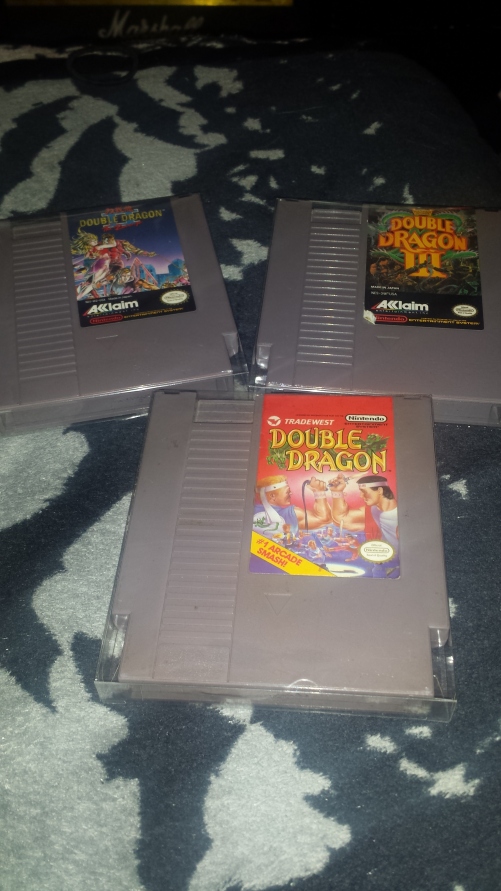