As much as I loved the original  Return of the Jedi Rancor figure from 1983, there’s no denying that it was a bit of a pain in the ass when you made it swallow Yoda, an Ugnaught or a Jawa and they became instantly irretrievable  from the monsters gullet.

Galoob must have been only too aware of the original figures limitations when they released this wee take on Jabba’s favourite beastie  back in 1996.

The Rancor stands at around four inches tall. Not hugely imposing, but certainly in scale with the rest of the figures in the Action Fleet line, as seen with the Gamorrean Guard and Luke Skywalker that comes with the Rancor. 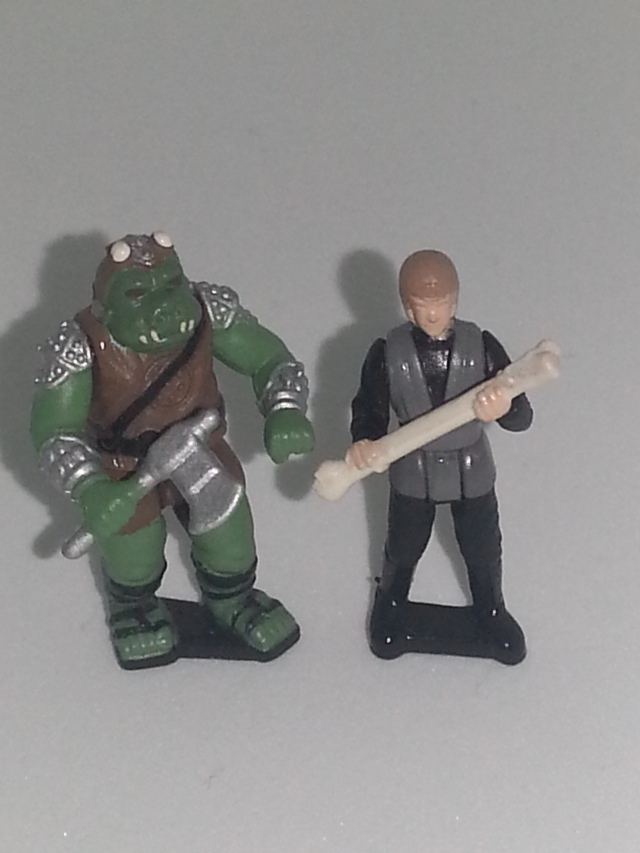 I don’t know if it’s because I’m tired, but I’m having to amend a few more spelling errors than usual today, but ‘Gamorrean Guard’ wasn’t something I had to check at all. I mean I just had to correct ‘amend’ from ‘ammens’ but I had no problem at all knowing the correct way to spell the name of a fictitious pig-alien that I probably only ever type once a decade, if that. Weird huh?

Anyway, the Action Fleet line was a spin-off of Galoob’s Micro Machines line and featured slightly larger figures as well as vehicles and locations that were more in scale with how they looked on-screen. I love the original Star Wars Micro Machines line, but they definitely looked a bit weird at times with spaceships that were the same size as the little figures.

This Rancor is definitely not a spaceship. It was one of the few ‘creature packs’ that were released amongst the many different vehicles and playsets in the line.

The figure does look a bit plastic-y and probably less detailed than the original 1983 version, but at the same time I still really dig that I can own a Rancor that doesn’t take up significant shelf space. My original Rancor was sadly broken when I came back from the pub a few years back and I tried throwing my jacket across the room to try and get it to hook on the back of the door, accidentally knocking the Rancor off the shelf in the process. He didn’t survive the fall, the top part of his face breaking off. I wasn’t pleased, but I did gain some solace knowing that upon entering the room, I had defeated the creature about thirty seconds quicker than it had taken Luke to do it in ROTJ. So screw you Luke, you miserable dinosaur milking twat.

Kenner made a bit of an error with the original Rancor figure in the sense that it failed to recognise that kids would inevitably want to stuff their figures down the Rancor’s throat. As such, some of the smaller figures were irrevocably lost in the belly of the beast. Perhaps to get around this issue, Galoob made ‘feeding’ a  bit of a play feature with their version of the Rancor, so lifting the arm will make the Rancor open its mouth so you can easily slide both of the accompanying figures in. 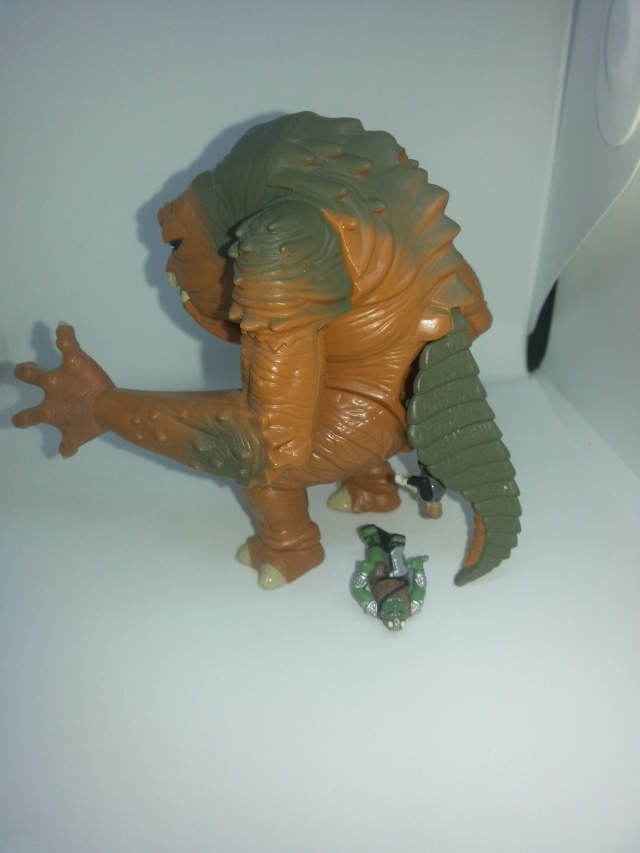 Boom, the first ever eating and shitting Star Wars toy. For added play value, you could make the Rancor eat some toy slime for a gross lookin’ mucus-like turd. I really wish I had picked some up now for this post. Wasted opportunity or what?

This isn’t the best Rancor toy that a company has made, but it was the first that I owned that I could get to shit a Gamorrean Guard, so I have to give a nod of approval for that. It’s also pretty cheap to pick up still, considerably more so than the original ROTJ Rancor which is probably the reason that I own this little one and not the original. Perhaps when I can find the original Rancor at a price that wouldn’t require me to sell one of my kidneys to buy it, then it might make an appearance on here, but until then this is the only plastic representation of Jabba’s favourite pet that I can afford.

Oh, and I found some toy slime! The downside being that it’s red slime, so it looks like there is something seriously wrong with the Rancor. 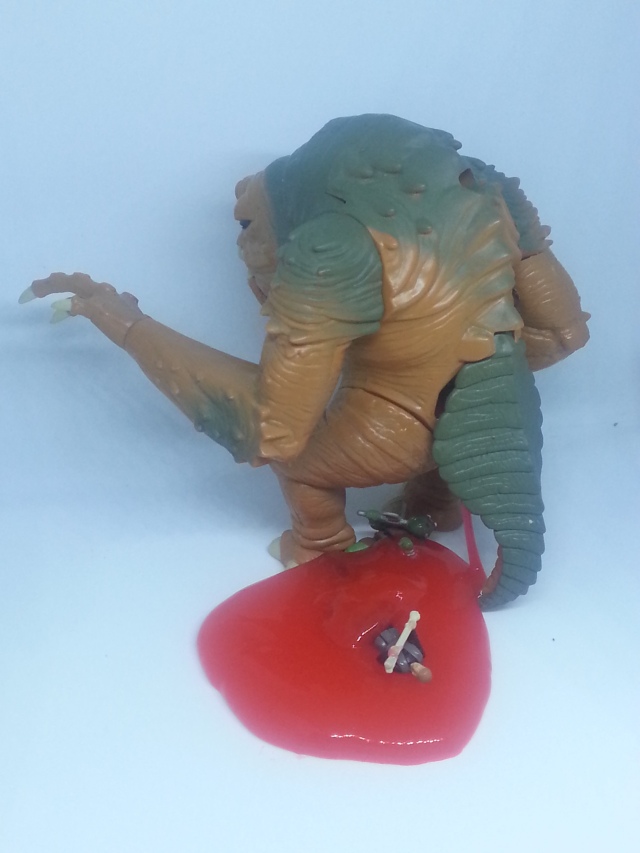 And on that shitty, bloody looking note, I think it’s time to wrap this post up.