I haven’t given Christmas any attention on here this year as I’ve just been so damn busy visiting family in England and stuff. I don’t think I gave it much attention last year either which feels like a personal failure as it’s definitely one of my favourite times of the year. Regardless of my failings, I still like to acknowledge the fact I have miraculously made it onto Santa’s good list yet another year, evident in the mountain of presents I woke up to this morning.

So I’ll start with my first present, which is something I received in the post about a month or so ago. Every year I take part in Secret Santa on the Star Wars UK Forum, which a site dedicated to vintage Star Wars. Last year my gift was a Micro Machines Death Star which I love, so I was excited to see what I’d get this year. I wasn’t disappointed!

Seven vintage Star Wars annuals! My Secret Santa had written on the packaging “one for every day of the week”. Apart from an Ewoks annual that is nowhere near as cool Star Wars (though I don’t hate Ewoks) this seems to be the complete set! It was actually the  Return of the Jedi annual in the bottom of the picture that first introduced to me to Star Wars back when I was four years old. I’d never heard of it before, but the pictures of the walker and Chewbacca on the front drew me in. Not long afterwards, my Gran bought me a shoe-box full of Return of the Jedi figures from a car boot sale, and I remember flicking through the annual trying to match figures up with the pictures. I don’t think I even watched any of the Star Wars movies until at least another couple of years later, but I knew the stories and characters just because of these books. It’s so cool to own a full set of these annuals and to read through all the stories I read years ago. If my Secret Santa is reading this post, thank you so much! Like my SS last year, you have given me a massive dose of nostalgia, which is totally awesome.

So, on to the rest of my presents. 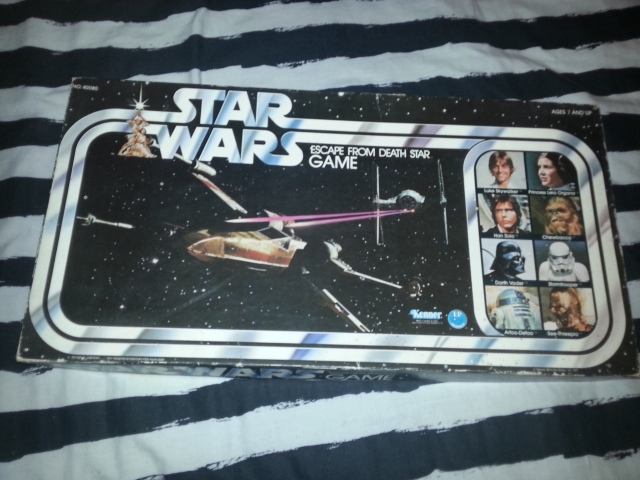 A vintage Star Wars escape from the Death Star board game. My girlfriend loves playing board games and didn’t hesitate to pick this up for me. The last vintage board game we picked up was a Nightmare on Elm Street game, that proved to challenging for either of us to figure out, but thankfully this looks a lot more simple to play.

I loved the Galactic Heroes line, but stopped buying them about a decade ago. I couldn’t help pick up a Hoth set for £6.00 from The Entertainer the other day and my girlfriend picked me up this one. I’m twenty years passed the intended target age for this toy, but I like cutesy deformed figures, Ewoks and little playsets, so this is right up my street. I’m probably going to cover this set as well as the Hoth one in the future.

A variety of consumable things! 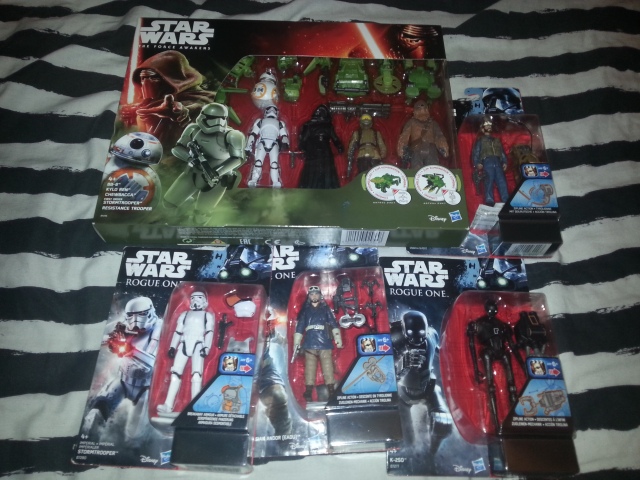 A whole bunch of Star Wars figures! Though I’m not overly keen on the idea of Star Wars movies coming out every year, it does mean that whenever a new movie comes out, the toys from the previous movies usually go to clearance prices to make room for the toys from the next new movie. With the release of The Last Jedi, all of The Force Awakens and Rogue One toys came down in price, so my girlfriend picked a few up for me, some of which will probably appear in a ‘Star Wars Saturdays’ future post. 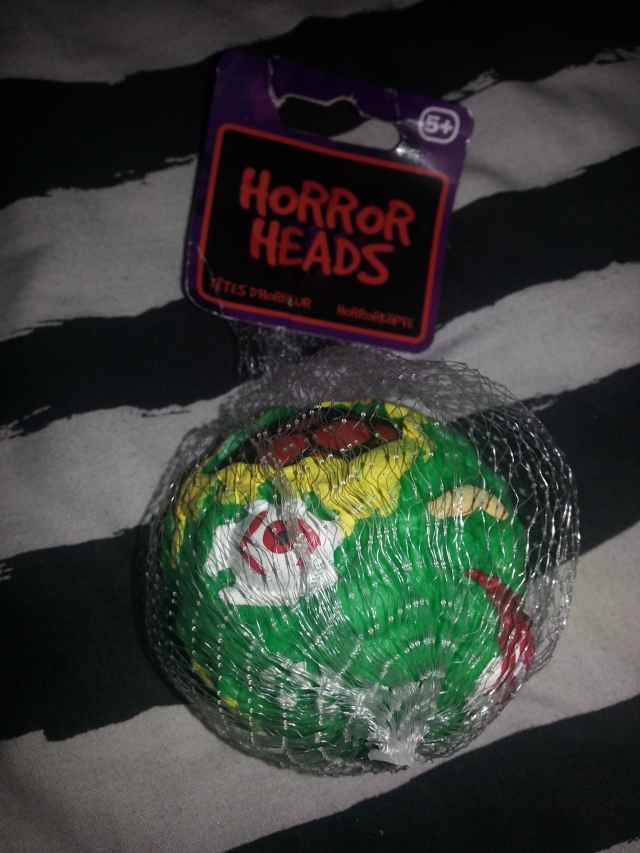 A Horror Head! This piqued my interest whilst we were doing Christmas shopping so my girlfriend got it my stocking. It looks a bit Madballs-esque though is just a squidgy, rubber head.

Squeezing it makes the brain poke out through the net area on the top. It’s totally awesome. 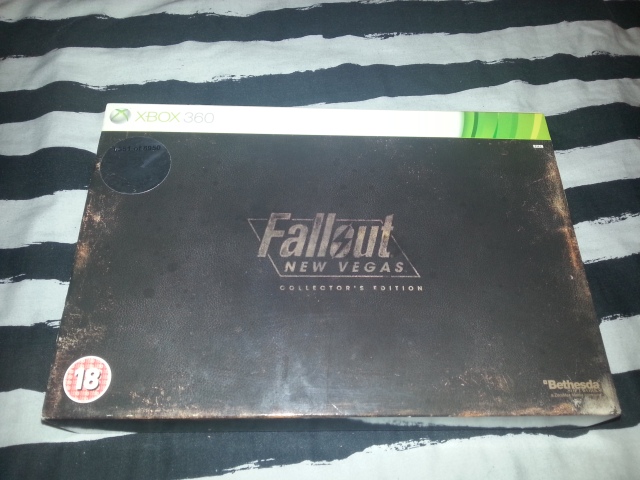 Fallout New Vegas Collector’s Edition! I love New Vegas and I’m far from alone with these sentiments. Bethesda’s Fallout 3 was pretty good, and they allowed Obsidian Entertainment to develop a follow up title- New Vegas. It improved on many of the things that were a bit lackluster in Fallout 3 and added a whole ton of features that made the game more fun. I’d wanted this edition for ages, as it comes with a graphic novel, poker chips and playing cards, so I’m chuffed I finally have it.

A cool metal Motorbike club sign. I’m not in a motorbike club, but that doesn’t stop me from appreciating this neat retro looking sign with a cool skull motif.

Everyone knows what Aladdin is, so I don’t really need to explain that. I had the VHS of both of them years ago, and though they aren’t as good as the original movie, they are still fun and worth a watch.

This thing is amazing. I saw this back in March on eBay and told my girlfriend that I needed it. It was about £20 which honestly feels like a steal for something of this size. He’s about 12-14 inches high, so could totally work in a scenario where a regular sized Mikey figure has somehow been hit with a growing ray from the technodrome or something. I don’t know if I would really have the space for the other three turtles in the set, but I’ll deffo make room for Mikey.

Disney Infinity Boba Fett! I don’t really know what Disney Infinity is. I think it’s kinda like how Nintendo’s amiibo work. I’m not even sure what games that these would work with, but my girlfriend’s Grandmother picked up this Boba Fett for me as she knew I liked Star Wars. She was right. I might not know much about Disney Infinity but I know a lot about the best bounty hunter in the galaxy, and I like owning a cartoon looking figurine of him.

Captain Phasma aftershave spray! It’s actually not bad smelling for a cheap spray. I do find it strange that they decided to use Captain Phasma on the box though. She only appeared in The Force Awakens for about five minutes, and didn’t really have much of a presence, which was a shame as Gwendoline Christie who plays Phasma is a fantastic actress and they really didn’t make the most of her in my opinion. Seeing as it’s a spray for men, I would have thought Poe or Finn would have been a better choice to really sell the product, but whatever!

Various games! For the PS4, a Limited Run Games ‘One Way Heroics’. For the PS2, ‘Final Fantasy X’ signed by James Arnold Taylor, the voice of the protagonist Tidus, and for the Nintendo DS, ‘Dementium’ a first person survival horror game that I’ve had my eye on for a while now and ‘Star Wars- Lethal Alliance’, one of the few Star Wars games I didn’t own.

A Star Wars Newspaper comics book, something I had wanted for ages.

And a He-man and the Masters of the Universe newspaper comic book. So much comic book material to be getting through!

A torch, a stormtrooper bottle opener, some ‘smellies’, a lightsaber mug, a bandana bracelet and some top trumps! Top trumps have become a birthday or Christmas tradition, as I once made a joke to my Auntie how often she buys me top trumps, so she goes out of her way to find different sorts for me now. 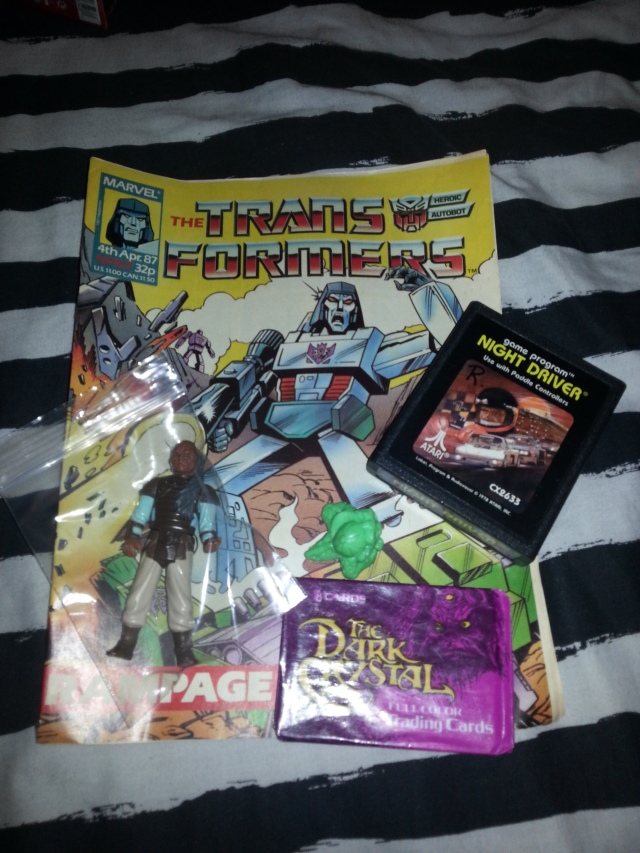 An ’80s Nostalgia box from The Toy Box which is an awesome place to get retro stuff in a random mystery box here in the UK. This is probably my favourite box I’ve had from them so far. A Boglin, a Star Wars figure, Transformers comic, Dark Crystal trading cards and an Atari 2600 game, there’s nothing here that I don’t like! 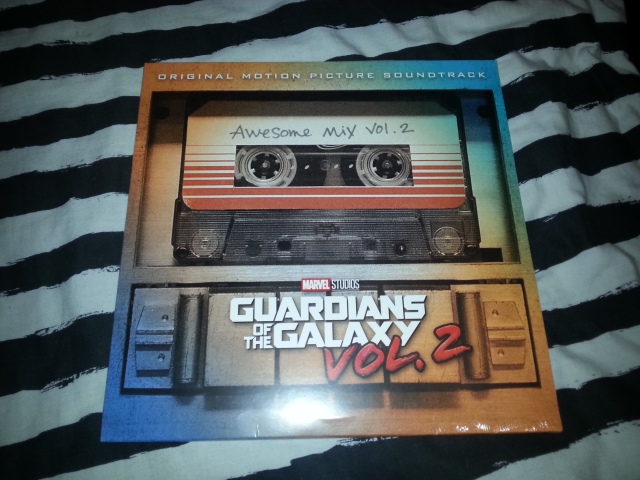 A Guardians of the Galaxy Vol.2 vinyl! I recieved the first one last Christmas so am pleased to get the second this year. I haven’t gotten around to playing the first one yet, but it will happen one day! 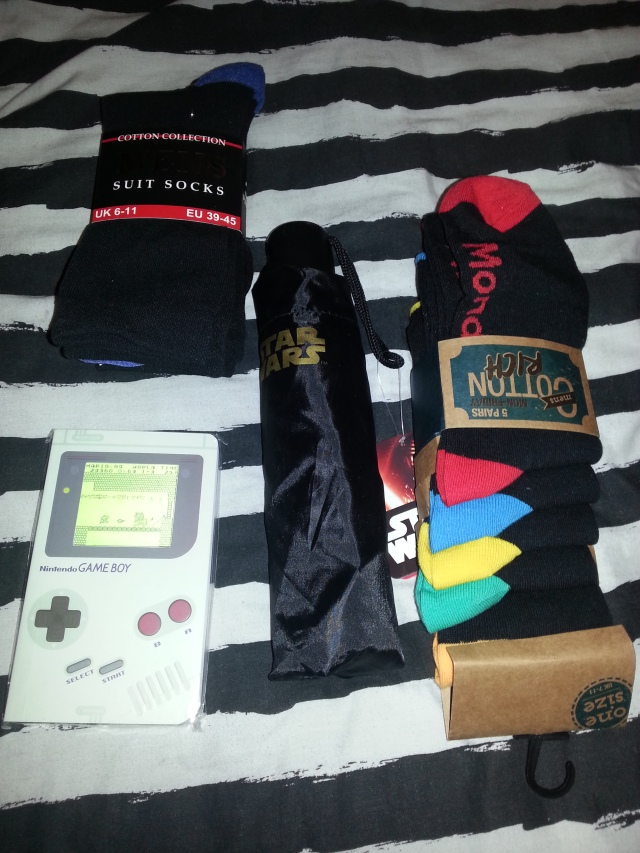 Socks, a Star Wars umbrella and a Game Boy notepad!

A Fender T-shirt and a Star Wars ‘modern’ Stormtrooper T-shirt!

Game of Thrones action figures! I like 3 3/4″ figures and Game of Thrones, so I love these. I don’t own any others but being 3 3/4″, I can finally find out who would win in a battle between a Tusken Raider and a wildling. 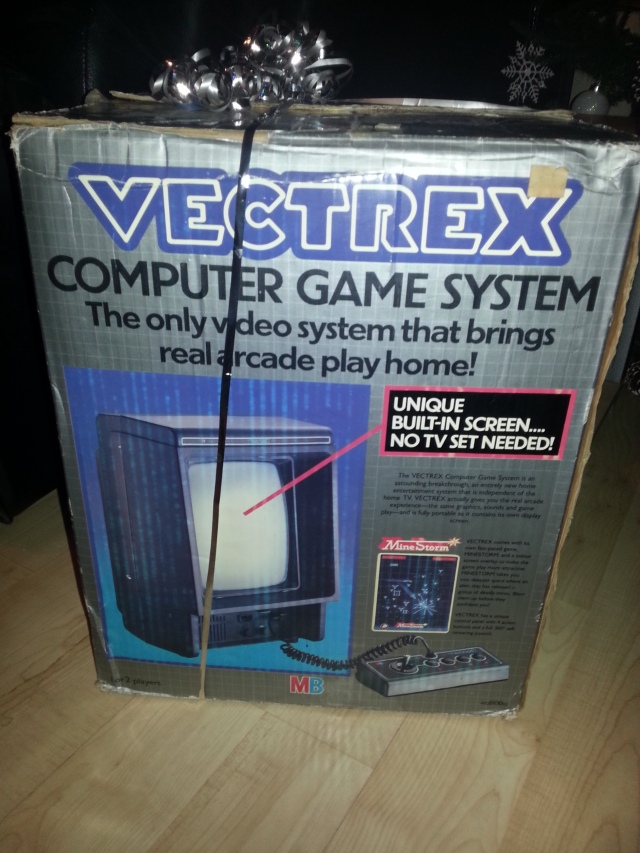 A Vectrex video game console from 1982! I have wanted one of these for aaages and now I finally own one! It came with a few different games- mainly space-shooter types, but I would love to do a proper post in the future about it, as it really is an impressive little machine.

That concludes my Christmas haul this year I think! I hope you all had a damn good Christmas as well, and I hope Santa was as good to you guys as much as he was me! I’m now going to go and watch Doctor Who and continue to eat my own body weight in food.