After getting a Retron 5 for Christmas last year, I faced a conundrum. I had owned many different systems and games over the years, but unfortunately  nearly all had been lost to time.

The first few games I decided to re-acquire were pretty much the bread and butter of retro gaming, and ones that I had played and loved playing before. Starfox (Starwing in the UK), Super Mario All-Stars for the SNES, and Sonic the Hedgehog 1 and 2 for the Mega Drive/Genesis. I also bought up Star Wars for the NES as I loved the Gameboy version of it as a kid.

I also wanted to try picking up a few games I had never played before, titles that drew me in based on their cover art alone. I am someone who grew up playing games for the Amstrad CPC, which had  some truly crap games disguised with fantastic looking cover art, so I knew the risk of trusting artwork alone. Anyway, after a late night perusing ebay, I ended in ownership of this:

As cover art goes, this doesn’t look fantastic. But I did like how Hawkeye seems to have accidentally shot Ironman in the back and you can kind of see the realization on his face and him thinking “Shit. Maybe he won’t notice.” 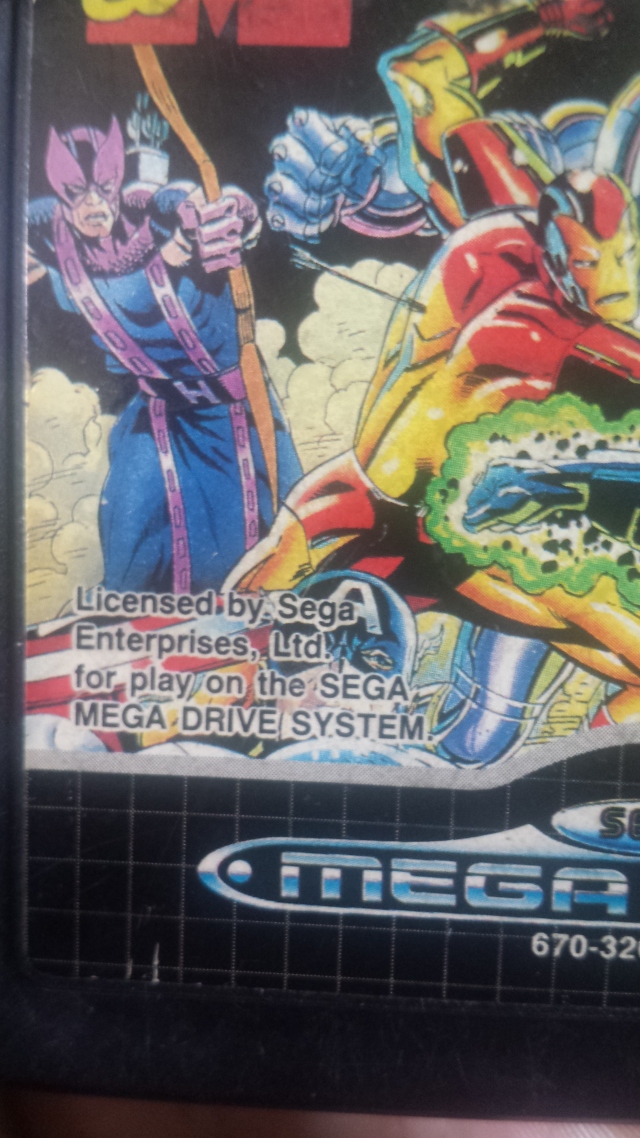 Booting up the game you are greeted with the usual company logos, then instead of taking you to the game menu, you are instead bombarded with a demo of Captain America fighting various bad guys. This irked me somewhat. If I was still a kid in the 90’s  and I had just had to save 10 million weeks of pocket money for this game,the first thing I would  want to do is play it myself not watch a demo. But I guess it was just trying to be arcade-like.

So pushing start to interrupt the demo and I was taken to the main menu where a man loudly announces “THE AVENGERS!” in a silly voice, and generic ’90s superhero music  begins to play. 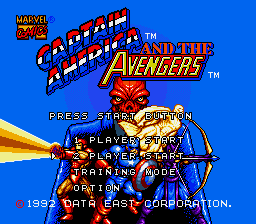 So I push start and I am then tasked with choosing which character I want to play the game with. I opted for Ironman and then I’m given a brief summary of the story and what I am meant to be doing.

“By assembling a team of super-villains Red Skull seeks to conquer the world. He has used his wealth to assemble his evil team. He has used a mind control machine to bring them under his power. Now he controls their every action.”

Okay, so surely he could have just used his mind control thing and not have used his wealth? Was he like “Okay guys, here is loads of money. But in exchange for this, I need to take over your minds and stuff.”  And  if you are going to assemble a team who is already bad, then you don’t need to use a mind control thing on them? I don’t think Red Skull really thought it through.

The game starts and I’m stood in the street with three people running towards me. I instantly start mashing the controller to unleash some Stark brand of destruction upon them. But turns out that they are just civilians trying to run past me (One man is running towards me arms outstretched as though I am a long lost son he wants to embrace). I cannot move until they have left the screen. At this point it has been about a minute since I selected ‘1 PLAYER START’ and I still haven’t had the chance to slaughter a single bad guy. This isn’t sitting well with me.

So they leave the screen and the game FINALLY begins and robots smash out of windows in the background to attack me. I press all the different buttons to figure out what button fires  missiles or starts my propulsion jet so I can fly. Only none of them do. This is just a side scrolling beat ’em up and nothing more. Pushing two buttons I can   shoot a very feeble laser attack but mostly I just have to use punches and kicks to beat the onslaught of attacking robots. 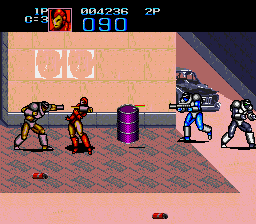 I can also pick up barrels, rocks and and what looks like empty coke cans lying on the floor and throw them at enemies. I don’t know if it’s the Marvel Cinematic Universe’s fault  with the portrayals of Ironman and all of the tech he has in his suit, it seems so funny in this game that I am throwing rocks and coke cans at enemies to inflict damage. 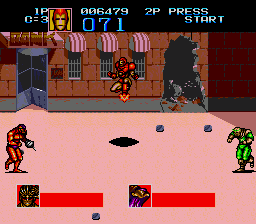 After a little while of punching robots I encounter Whirlwind , who I presume is going to be the stage boss. He runs off and I have to fight two other goons, who provide a slight challenge. Then it’s back to punching more robots for a bit before I arrive at the boss and the cut scene/bit of dialogue that follows. 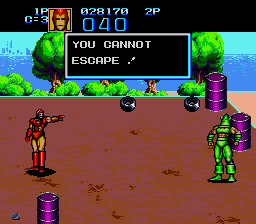 Stick that comeback in your pipe and smoke it Ironman! Wait, what? What the hell does that even mean? Like are you going to let Ironman escape? That doesn’t really seem very threatening. Look Whirlwind, if you only have really really shit retorts, then don’t bother saying anything at all.

So after I beat Whirlwind I am informed that “Whirlwind’s attack was just a set-up. Other towns are being taken over.” I feel like such an idiot.

So begins the second level and it’s my favourite one in the game. It starts on the rooftops  having to fight more robots, then all of a sudden you take flight!

I hadn’t played shoot ’em up games in years but I was reminded how much fun I had with games like R-type as kid on the Amstrad. 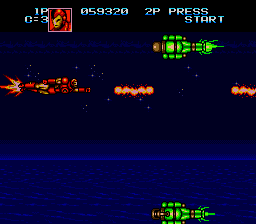 So after a short trip across the ocean, shooting more flying bad guys, I came to another town and was being attacked by Sentinel. He seemed to  pose much more of a threat than the first boss, and after having my health depleted during that level, I still ended up losing a life to him and lost most of my health as well, due to him filling the screen up with near inescapable lasers and stuff. 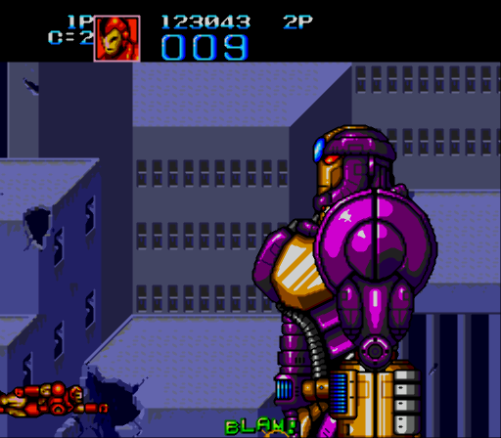 After destroying him, it’s back on the ground with more robots to fight. I find these parts a little monotonous, even though the robots are fairly varied, there are ones with guns, ones that punch, airborne ones that explode etc. They just kind of keep coming one after the other, depleting your health here and there, and health is very hard to come by. Occasionally Quicksilver will run through the level carrying a plate which gives you health, but this happens  very rarely so you have to rely on skill to not lose health. Skill I do not possess, so I decided to change my character when I lost another life to see if it would vary anything. I seemed to die a lot quicker using Hawkeye than I did Ironman, but I managed to get to the boss of the level, Grim Reaper.

This guy seemed ridiculously powerful, as he varied his attacks by  shooting projectiles, doing air attacks and sprinting towards me. With my last life I tried using Cap to beat him and I failed.

After my defeat, for the purposes of this review so I could actually try and finish the game, I decided to be a big wuss and turn the difficulty to easy mode, and give myself more lives. So I started again, and it seemed much more of a breeze.

I won’t drag this article on for much longer as I am sure this is getting a bit boring. After beating Grim Reaper, its a bit more robot punching, then another flying segment, only underwater and having to fight a very easy robot octopus.

Beating him gains you entry to an undersea base. More robot punching and eventually I meet an armor clad Mandarin.After beating him, Red Skull appears on the screen behind me, looking entirely too happy considering I am beating all of his minions that he forked out good money for. 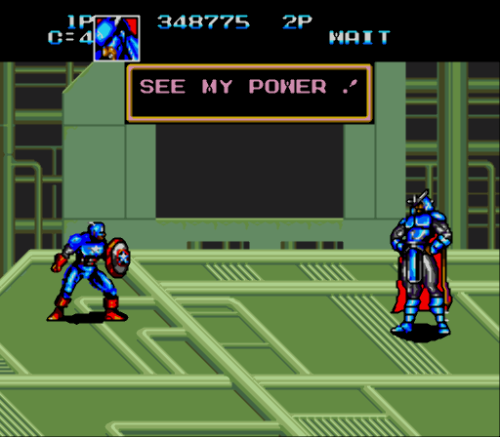 Following this, you are informed “The Avengers have located Red Skull’s hideout and discovered his plans to build a secret base on the moon, and to arm it with a giant laser cannon. If his plans are carried out, it will mean the destruction of not only America but of the whole Earth as well.”

I found this quite a strange way of putting that forward. Do they think that Americans wouldn’t understand the threat level faced here? If they had just said “It will mean the destruction of Earth” would Americans really be saying “Well at least ‘Merica is safe even if Earth is destroyed.”

I also don’t understand why  Red Skull would want to destroy the Earth. At the start it said he wanted to conquer it, now he wants to destroy it.  Red Skull, do you even know what your motivation is? 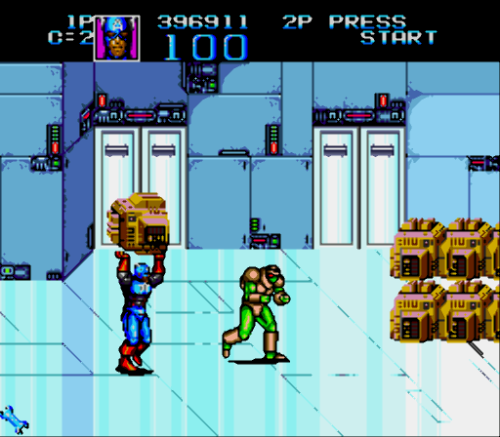 The next level is predictably set on a space station and it really gets tough here. But knowing how America and Earth is in danger, I try my best to  battle on through more metallic hoards.Regrettably losing more lives before I arrive at Ultron, the boss of this stage. Then I am handed a thorough ass-kicking. 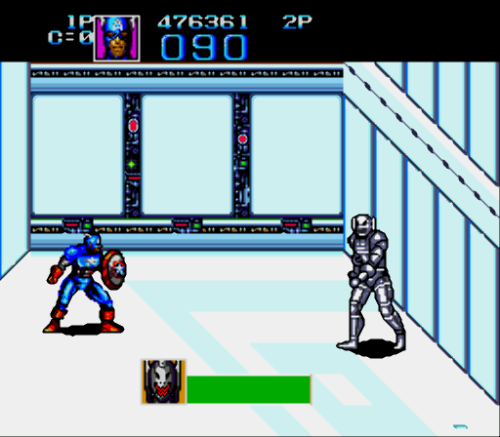 After investing far too much time into this game, I really couldn’t be bothered to go through the game again to give it another go, so to my knowledge, America AND the Earth  were unfortunately pulverized.

In all, this game isn’t a terrible one. It’s very monotonous at times and I wish the playable characters had a few more abilities. I think I would have probably enjoyed this game a lot more if I was playing it co-cooperatively. But if you want a beat ’em up set in the Marvel universe, this isn’t a bad way to go, though I would have to say the X-men: Mutant Apocalypse for the SNES  was a better entry. But for a game that was made in 1992, two years after I was born, this game certainly does hold up and looks better than me.

If you find it cheap in a retro games shop then  pick it up and give it a blast. There are far worse games to play on the Mega Drive.

One thought on “Video game Retrospectives- Captain America and the Avengers, Sega Megadrive/Genesis”